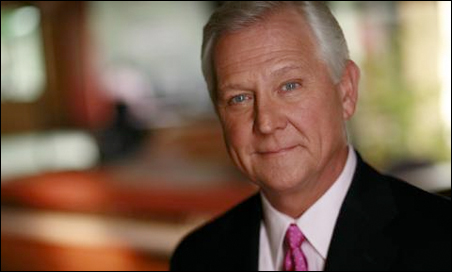 minnesota.cbslocal.com
“Didn’t you used to be Don Shelby?”

You may have noticed that I have retired from the daily practice of television journalism. (Insert your own jokes here about the oxymoronic nature of the sentence above.) I was fearful, and remain so, about what my life would be like without the megaphone that WCCO-TV provided me for 32 years. I have always believed that there is no greater has-been than a person who used to be on television.

Once, Dave Moore, after his retirement, was walking down Nicollet Mall and a man stopped him on the street and said, “Didn’t you used to be Dave Moore?” I’m waiting for someone to say that to me.

As it turns out, I have friends in high places who still remember that I once could spin a pretty good yarn. So, here I am writing for MinnPost. This opening tome will not contain a lot of news reporting. I intend, however, to do that in future pieces. This post is intended to bring you up to date on what’s been happening to me in the past two months since my retirement.

I have always been a student. That is, I became a student after I was one, officially. Once I was in the business, I realized I knew dreadfully little. I would go to parties and the group I was chatting with turned its attention to Proust. I turned my attention to the punch bowl. Another clique was carrying on about intrigues inside of some obscure public agency or other. I nodded in recognition of the dilemma, and made a note to look up some facts about what they were talking about.

It was that way on an incalculable number of subjects – subjects common to the conversations of my colleagues, but foreign to me. When I was starting out, I didn’t think a journalist needed to know anything, but simply go out and get two sides of a story, stick some purple prose on the thing, and do a smashing standup close. I was mistaken, and my inferiority complex became more complex.

The next 45 years
So what happened over the next 45 years was the often pathetic effort you see when watching a basketball game, one team is outmatched in every aspect of the game, and it is playing from behind, hoping that something remarkable will happen to turn the game around. Hoping that the team suddenly becomes good. It is a forlorn hope. There is only one answer. The team, the players, has to get better.

My coach was Dave Moore. He had me figured from the tip-off. What tipped him off was my knack of changing the subject every time he brought up one about which I was ignorant. For the first couple of years, I changed the subject during every conversation we ever had. Dave was not the kind of person who would humiliate anyone, and he didn’t me. But, from time to time, I would find a book on my desk with a note in Dave’s hand. “You should read this. I think you’ll like it.”

I read the books. Most people had read them in high school. I hadn’t. I played basketball, partied, got beat up a lot and played some more basketball. My Dad was smart and so was my sister. That seemed like enough in one family. I was the only basketball player. In fact, I lettered in every sport my school offered. It was a hiding place.

So, I ended up in a profession where, to my surprise, you had to actually know things. You had to know how government worked, how police investigate crimes, how lawyers try cases, how there exists a tension between worker and employer, how politics isn’t the same as governance and how every leader is not cracked up to what he or she should be. How people in power will lie and try to keep critical information secret so the public will never awaken to the fact that they are, from time to time, being railroaded into believing a lie.

It was all new to me. I was an innocent.

So, I concocted a game plan. I took to taking notes. When someone brought up the Bronte sisters, I wrote down their names – misspelled, as I remember. Bronty. I made a list of books I should have read. I made a list of 100. The next year, I read them all. By the time I had finished the list, I had a new one — another 100. I read them. After five years, I could hold my own at parties and with Dave, without changing the subject very often.

The more I worked as a reporter, the more I realized I had no idea what other people did, or how they did it. So, I began hanging out, in my off-hours, with judges and lawyers and police officers.  They were more than happy to teach, because that’s what they were doing. I was nearing 30 years of age and I was, at last, becoming a student.

Couldn’t stop
I am an addictive personality. I have been addicted to tobacco, alcohol, getting engaged (five times) and now I was becoming addicted to learning things. I couldn’t stop. I kept reading from the catch-up list, but I added texts of the more obscure kind. I was blessed with a wonderful and awful capacity to be unable to forget anything I read.

What got me into television in the first place was the fact that I loved attention, the center of the stage; I wanted the ball in my hands at the end of the game. I loved approval and I loved to perform. That’s where the learning took a turn for the worse…the worst. I became a blow-hard, know-it-all.

The image would stay with me throughout my career. I understand. But, the truth was, I was so damned happy to know things, and so proud of the fact, that I couldn’t keep it to myself.

I’m still doing it. Retirement ought to mean that the pressure is off. You’ve done your job, you’ve won some awards, you made some money and built a family, and now it is time to relax. I can’t. Every day I am reminded of something I don’t know, but should. What has gotten me the last few years is how little I know about science. I was terrible at science in school. I wasn’t going to be a scientist, so there.

Now, much of what is important in the world has something to do with an area of understanding for which I’ve been a cipher. So, I’m doing what I’ve always done. I’m reading everything I can get my hands on. I’m taking courses on organic and inorganic chemistry, physics, quantum mechanics and geology. I’m doing this so that I can know what scientists are telling us. Ten years ago a scientific paper looked like gobbledygook to me. Today it looks less so.

Why study the sciences? Fair question. I want to know, among other things, if the science supporting global-warming theory is correct or if some people — fossil fuel producers, politicians who represent those businesses or states big on fossil fuel production, and blowhard pundits — are correct in saying there is nothing to worry about.

I’m reading a lot about water and petroleum and talking to economists and petro-geologists about whether we should be concerned about running out of the two things that, one, make our country run, and two, make human beings and all life run. These seem to be more than just interesting subjects for cocktail party discussion. If the science is right, we are in big trouble. We are in big trouble at a time when I am supposed to be off the journalism clock.

I’ve got to tell you that I wouldn’t be comfortable in a hammock or passing a lazy summer day fishing if I could help find the truth of these matters and tell them to people. I could get a soapbox and stand on the corner with a tambourine and a megaphone and let my hair grow and wear a sandwich board warning of the end of the world, as we know it.

Or I could write a weekly post for MinnPost. I think that’s what I’m going to do.

After retiring from television journalism, why I can’t quit as a journalist