State Rep. Mike Beard is a nice guy. The Republican from Shakopee is the former president of the local chamber of commerce. He says he cares about humanity. He is a man with deep Christian values, a free-market conservative and a veteran of eight years on the Minnesota House Environment, Energy and Natural Resources Policy and Finance Committee.

He is not, however, a scientist. But sometimes he sounds like one.

Earlier this month he introduced legislation to lift the moratorium on coal-fired power plants in Minnesota. That’s when the representative began talking like an atmospheric scientist. He lectured his colleagues on global warming. He told the committee members that the planet’s troposphere over the tropics was not warming. He is not afraid of CO2 and he’s not afraid of coal. 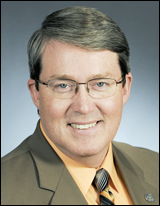 It makes sense if you know something about him. We had a long talk Saturday. He told me he was raised on a farm in western Pennsylvania.

“Our farm was mined for coal three times,” he told me.

“And, now we stand on a point and look over barley and wheat and pines. Did we temporarily disrupt the face of the earth? Yes, but when we were done, we put it all back together again.”

Climate scientists say burning more coal could result in catastrophic harm to the planet and widespread human suffering. Most of them are convinced that there is a point at which we will never be able to put it all back together again.

Dr. John Abraham, a professor of thermal sciences at the University of St. Thomas and an expert on global warming science, read the transcript of Beard’s lecture on global warming. Abraham then wrote a letter to Beard and members of the committee pointing out where the published science disagrees with the representative’s claims. The two haven’t talked, but both men say they would like to.

Where’s the science?
I wondered where Beard learned his climate science. He says he reads a lot. I asked him what he read, and he gave me the names of several conservative blogs sites. The scientist he pays particular attention to is Dr. Patrick Michaels. Michaels admitted on CNN that 40 percent of his funding comes from fossil fuel producers.

It is understandable. Mike Beard is a free-market conservative and pro-business. No one who calls himself those things can afford global warming to be true. There is a political belief that solving global warming will destroy American business. American business deplores government interference. Global warming regulation and legislation requires governments to act. But Professor Abraham says he would love to see free-market solutions arise. The problem is, he says, nobody on the conservative side is coming up with ideas.

Abraham told me Sunday: “This is an opportunity for a dialogue. Maybe there is a way to bridge the partisan chasm and allow a free-market champion to propose solutions.” Abraham then added: “I’m glad to hear Representative Beard cares about humanity. That’s a helpful place to start.”

But right now, Mike Beard’s solution is more coal-fired power plants. He told me that having more coal plants would pave the way for renewable energy. I think he meant it would buy time for innovation without a drop in base load electricity as demand increases.

The lifting of the moratorium seems an odd piece of legislation. Utility companies haven’t been outspoken about their need for more coal-fired plants in Minnesota. Rep. Beard says he hears from them, nonetheless. It sounds like he’s saying the utility crowd talks coal in the saloon and renewables in church.

A lot of what Beard knows he learned in church. One Congressman, talking about global warming, recently said that God wouldn’t allow man to do anything to destroy the planet. Beard told me, “It is the height of hubris to think we could.”  I asked him about nuclear war. He said: “How did Hiroshima and Nagasaki work out? We destroyed that, but here we are, 60 years later and they are tremendously effective and livable cities. Yes, it was pretty horrible,” he said, “But, can we recover? Of course we can.”

The International Energy Agency’s most recent analysis said world oil production peaked in 2006 and petroleum reserves are now in decline. We might not be running out. We are, it seems, running low. Beard continued, “God gave us our minds, creativity and ingenuity, and that is our most valuable natural resource.” I agreed with him. I don’t think we’ve peaked on those resources, yet.

Abraham, and a lot of people fearful of the consequences of global warming, would welcome some creativity and ingenuity from the party in power. Rep. Kate Knuth is in the party out of power. She is one of the people he lectured the other day on the science of global warming. Knuth has degrees from the University of Oslo, the University of Chicago and Oxford. She is a Fulbright Scholar and teaches at Hamline’s Center for Global Environmental Education. She voted against lifting the moratorium on coal. She is in the minority.

I couldn’t help myself. I had to know the answer. Is the troposphere over the tropics really not warming, as Beard told the committee?

I called Dr. Ben Santer. He is a climate researcher with the Lawrence Livermore National Laboratory and was the convening lead author of Chapter 8 of  the 1995 “IPCC Working Group Report.”

He said the troposphere above the tropics is warming. I asked him who says, beside Rep. Beard, that it isn’t.  Dr. Santer told me that two scientists at the University of Alabama, Huntsville (Christy and Spencer) reported that in a study several years ago, but when researchers from Livermore, Yale, Princeton and elsewhere found a “sign error” in the math, the authors admitted the mistake, corrected the error and found, by their own calculations, the troposphere above the tropics was, in fact, warming.

There is another study floating around, but Santer says that, too, has been found to be bad science. An exasperated Dr. Santer told me, “Unfortunately, the wrong information is still out there.”

That is a problem because that kind of wrong information is often found on the websites Beard most admires. The research upon which he bases his public-policy decisions often comes from scientists working for fossil-fuel subsidized foundations and institutes. People seem to pick the science that fits their politics, whether the science is good or bad.

Santer recommended instead that Beard and everyone else on the planet read the 21 reports from the U.S. Climate Change Science Program that have been distributed to every member of Congress. The reports are written in plain English and require no advanced degrees, but they do require an open mind.

I told Dr. Santer that Rep. Beard would likely read the reports, because he does read a lot. The question only Mike Beard can answer is whether he has the required open mind.