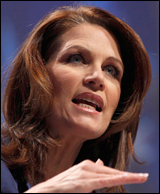 For those of you who can’t seem to get enough of Michele Bachmann’s brand of wisdom, your cup is about to overflow.

She has announced her intention to form an exploratory committee designed to assess whether there is any sense in her running for the office of president of the United States.  The committee will find lots of support for Minnesota’s 6th District republican representative. She is the darling of the phenomenon known as the Tea Party movement. If she finds a way to get elected president, one thing is certain — there will be no energy-efficient compact fluorescent light bulbs in the White House.

She doesn’t like them. She once said that if you drop one in your house, you would have to bring in people in hazmat outfits to sweep up the broken bulb.

But that’s not the real issue for Bachmann. What she is worried about most is the phasing out of old-fashioned incandescent light bulbs under former President George W. Bush’s Energy Independence and Security Act of 2007.

Some people have called it a ban. The law doesn’t ban incandescents, but sets performance standards most of the old-style bulbs can’t meet. The real reason Bachmann wants to do away with the light bulb phase-out is she just doesn’t like the government sticking its nose into everyone’s lampshade.

She has been very busy stumping in Iowa and elsewhere, and I haven’t spoken to her directly.  However, Doug Sachtleben, her communications director in Washington, passed a note to her and she responded to me in this fashion: “By a forced phase-out of incandescent light bulbs, the government is again deciding that it knows better than consumers.”

That is music to the ears of members of the Tea Party movement, many of whom believe our government is creeping toward socialism.

Phase-out could go forward if…
But her latest bill to strike the phase-out of incandescent light bulbs contains language that seems unlike the Bachmann we’ve come to know. In her bill, the congresswoman says that the phase-out could go forward if the Comptroller General’s office verifies the promised performance gains of the new technology. Bachmann’s response continues: “It should be incumbent on our government to prove the environmental and economic claims made about CFL [compact fluorescent light] bulbs, and disprove concerns about health risks they may pose.” The full language of the bill also mentions “the phase-out required by those amendments will reduce overall carbon dioxide emissions by 20 percent in the United States by the year 2025.” (Italics mine.)

Has she changed her tune? That’s not likely. She might be hoping claims of a 20 percent reduction of carbon dioxide emissions with CFL bulbs cannot be proved. That alone would scuttle the phase-out.

This is the second time she has introduced a bill calling for the repeal of the phase-out. The last attempt went nowhere. And, this latest bill is only one of the repeal bills in Congress. There is another, offered by Texas Republican Joe Barton. It is officially H.R. 6144, but is getting more play in the press because of its title: the “Better use of Light Bulb” Act. The BULB Bill.

Both of these bills may need some reworking as technology is advancing at the speed of light, which is appreciably faster than the arthritic pace of Congress. Bachmann’s main concern is with compact fluorescent bulbs.  History may eventually show that CFL bulbs were just the beginning of new bulb technology. Already there are better, higher efficiency bulbs available, with more on the horizon.

Mercury in bulbs
The mercury in CFL bulbs is still a concern for a lot of consumers. LEDs (light-emitting diode), halogen lamps, and a new light called ESLs (electron stimulated luminescence) will replace CFLs. LEDs and ESLs have no mercury. They don’t have the problem of slow start up when the switch is thrown, they are dimmable and their lifespan is not shortened by frequent cycling, which is simply how often you turn the light on and off.  GE says it will have a hybrid bulb out next year combining the best of halogen and CFLs.  The LEDs are more expensive than incandescents and the cheapest CFLs. Manufacturers say the higher cost is offset by the much longer life of LEDs.

Rep. Bachmann may be playing to the Tea Party faithful, but she certainly isn’t helping another important part of the Republican base — business. Businesses have been switching to higher efficiency lights at a pace greater than the general public. It is not because the businesses are necessarily good stewards of the earth, or have gone all fuzzy on the environment. Lower electricity bills mean higher profits.

Electrical industry groups are on record opposing the lifting of the phase-out. The Association of Electrical and Medical Imaging Equipment Manufacturers (NEMA) said in a press release: “The reality is that consumer preference already has been shifting away from incandescent products.”

NEMA’s figures show that the market for standard household incandescent bulbs dropped by 50 percent in the past five years. It points out that roughly 22 percent of all electricity demand in the United States goes to lighting. The potential for energy savings, according to NEMA, is “immense.” Then, the most Republican of assertions: “American businesses and consumers will annually save billions of dollars in electricity bills once the transition is complete.”

Dr. David Morris, vice president of the Institute for Local Self-Reliance, told me why the new bulbs are important. “The new light bulb is how energy efficiency gets into every room of the house,” he said.

But the newest lighting systems have a much higher front-end cost. “Americans have always disliked ‘first costs,'” Morris said.

Building an economy of scale often requires people to pay more in the beginning until prices are driven down by competition. “People just don’t seem to look at this in terms of return-on-investment,” he said.”They think ROI when they invest, or buy stock, not when the buy light bulbs.”

Hoarding bulbs
Morris is not convinced all Americans are willing to pay a high premium on the promise of lower bills in the future, and he anticipates opposition. There have been scattered reports of incandenscent “hoarding.”

“Maybe the Tea Party will dump a shipload of CFL’s into the harbor,” Morris said.

Rep. Bachmann’s spokesperson says staff is exploring whether a thorough government study of CFL bulbs can be started prior to legislative action. Morris is puzzled. “This thing has already been studied to death by the government,” Morris said.

Sachtleben told me the Comptroller General’s office stands ready to initiate the study required by Bachmann’s bill. But if it examines only CFLs, which may be a dim memory by the next decade, and fails to look at the newest technology, the study will be a waste of the taxpayer money, and Rep. Bachmann would never stand for that. No one with presidential aspirations would want that on her record.

Here’s a link to the NEMA website on the phase-out repeal bills.