Color has always been an issue in this country. Since it started, black and white (the presence or absence of color) have been polarizing. In the McCarthy years, red was a color to avoid. The combination of red, white and blue still moves us.

“Green is,” according to Thomas Friedman of The New York Times, “the new red, white and blue.”

Green is a loaded color. It has shades of gray. It is fraught with different meanings. Green has political overtones and is variously adopted or rejected based on one’s world view. Corporations are rushing to be identified with the word, whether or not their products are really green. When companies mislead us about a certain green product, it is called “green-washing.”

One thing you could count on is the idea of a green roof. Put some plants on the roof, save water and energy, and be proud of yourself. Green roofs are growing in popularity, and Minnesota has a lot of them, with more on the drawing board. The problem is, the best green roofs for our local climate aren’t really all that green. University of Minnesota researchers have discovered that, for our roofs, green is actually more silver in color.

A few years ago, John Erwin, a professor in the department of Horticultural Science, was asked to examine a green roof on the visitor center at the Lebanon Hills Regional Park in Dakota County. The green plants on the roof were brown, which is not a good color for a green roof. The roof was dead, and Erwin turned detective. His charge: to understand the circumstances surrounding the murder. 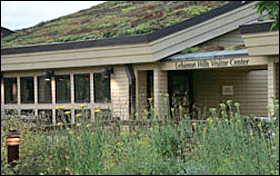 Erwin enlisted the help of Jonathan Hensley, a graduate student at the University of Minnesota. Hensley would help crack the case and write a doctoral thesis on his findings. It won’t come as much of a surprise that one of the prime suspects in the death was Minnesota’s climate. But Erwin and Hensley’s examination unearthed an unexpected fact. It wasn’t Minnesota’s winters killing the plants, but our summertime droughts.

I heard Erwin explain these things the other night at a citizen’s board meeting of the Minnehaha Creek Watershed District. The district, along with the Mississippi Watershed Management Organization and the Minnesota Nursery and Landscape Association, had helped pay for the research. He told the group that the plants used on green roofs in Minnesota were recommended by experts in Baltimore, Chicago, Toronto and Germany. All fine plants, he told them, but not right for our climate.

Saving energy
Green roofs, Erwin told them, work best in saving energy during the summer. The common wisdom suggests the roof plantings add insulation that would help lower heating costs. The biggest value, he said, was in lowering energy costs for air conditioning in the summer. A black roof (which most downtown buildings have) can measure as high as 185 degree on a Minnesota summer day. That makes air conditioners work extremely hard. More important, he added, the fresh air intake vents for building air conditioners are located on the roof. So, most summer days, the air conditioners are trying to lower 185-degree air to a comfortable interior temperature of about 70 degrees.

By adding a green roof, the ambient roof temperature is lowered by about 100 degrees and air conditioners are asked to do less work, and thus save energy and money. Target Center has a green roof; there are some at the University of Minnesota, the Minneapolis Central Library and at Mystic Lake.

Erwin and Hensley began a search for plants that would flourish in both cold and drought. After examining hundreds of plant species, they found 30 that would work here. They plan to publish the list in a few months.

I got a peek at the list at the meeting. One thing struck me. The plants for the green roof weren’t very green. What Erwin and Hensley found is that plants that have a silver cast to the leaves do the best work. Erwin knows that because he has an infrared thermometer he uses to measure the heat absorbed and reflected by the plants he grows.

“Color is important,” Erwin told me. “Light leafed plants are going to be cooler than dark leafed plants.” One might get similar results by simply painting the buildings’ roofs white, but that would miss an important value in green roofs. 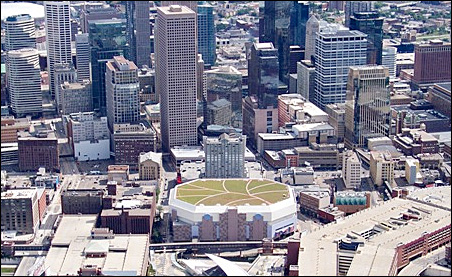 targetcenter.com
Target Center has a green roof, saving the stadium energy and money.

Aside from large cost savings on energy, one of the principle values of a green roof is its natural ability to capture and hold rain water in the wet months. By holding the water on the roof, runoff is decreased, lessening the pollutants washing into our creeks and rivers.

It is all part of a new ethic in maintaining water resources. Today, as opposed to our drainage ethics of the past, there is an effort to keep as much water as possible on your property and avoid sending it down the gutter. Rain gardens in landscaping do much the same thing.

Unexpected discoveries
Erwin made a few unexpected discoveries in his sleuthing. He found plants that would work well for Minnesota roofs that others had never considered. He said that green roofs of the future might have bulbs, herbs, flowering perennials, spearmint, peppermint and thyme. He has been looking at alpine plants that can withstand cold, heavy snows and drought. He thinks there is even a place for rooftop gardens that supply food, lower energy costs, and conserve water at the same time.

And for those concerned about such things, the green roofs absorb carbon dioxide from the atmosphere and may help cool off global warming by lowering the “heat island” effect of cities. Cities are often as much as seven degrees warmer than the surrounding countryside.

There is one more benefit of a green roof, Erwin says, and the discovery of it came as a happy surprise. Where green roofs have been installed, birds and bees return in abundance.

So, water conservation, biodiversity, sustainable plants, reduced energy use and carbon capture— that should qualify as a pure shade of green in anybody’s coloring book.