I shouldn’t be writing this story. Don Boxmeyer, the legendary scribe of the St. Paul Pioneer Press, should be writing it, but Box died three years ago. He would have wanted to tell you about Captain Bill Bowell. “Cap” died last week at the age of 90. So this loving story of Ol’ Man River falls to me. 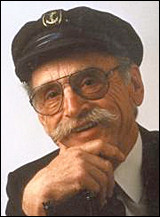 Bill Bowell was a river rat. He loved the Mississippi River when all had turned their backs on her. Thousands of Minnesotans have cruised his beloved stretch of river aboard one of his paddleboats. He was the head of the Padelford line. If you’ve read Twain’s “Life on the Mississippi,” you have a passing knowledge of the grizzled riverboat pilot Horace Bixby. Bixby taught Twain as a cub pilot. Bowell and Bixby were twins. Both were hard-bitten river men, both were exacting in detail and both demanded respect. Both had a blinding smile and twinkle in the eye.

He wasn’t always a river rat. You may never have known that the short and feisty man in the pilot house had received the bronze star and purple heart in World War II. On D-Day he was serving with the 82nd Airborne and dropped behind enemy lines. There was hand-to-hand combat, he seldom talked about. So heroic were his acts that both Belgium and France awarded him the Croix de guerre.

When the war was over he took his degree from Macalester, worked as a curator of the Minnesota Historical Society, was an engineer for the Studebaker Automobile Corp., and became a magazine publisher. Before he was a captain of riverboats he was a captain of business and industry. But the river kept calling him.

Pig’s Eye Parrant, for all intents and purposes, founded St. Paul by opening up a whiskey joint on the banks of the river. Captain Bowell got into the riverboat trade with the happy hope of carrying on Pig’s Eye’s aspirations. He bought a scow to shuttle drinkers to a mid-river island. Thereupon, the revelers were to enjoy the verities of Tugboat Annies, a notorious gin mill.

After a police raid, Annie’s went the way of Pig’s Eye Parrant. Captain Bowell looked for a new riverboat enterprise and the Padelford line was born. Nobody liked the river back then, and they gave Cap short odds of making a go of it. But he did, and now the line boasts the Jonathan Padelford, the Josiah Snelling, the Zebulon Pike, the Betsy, the Anson Northrup and the Harriet Bishop. Cap liked to prove people wrong.

A memorable birthday
Many years ago, my wife and daughters planned a special birthday party for me. They knew I loved the river and they knew I loved the old man. My wife called the Captain and asked if she could have a little party aboard with just the two of us and the three girls. He told her that the boats were booked, but to show up around noon on the given date. My wife told me we were just going for a drive and suggested we go down by the river in St. Paul. We ended up at the Padelford gangway, and there was the Captain, all spit-and-polished, welcoming us aboard.

There was no one else on the big boat but my family, the captain and a waiter. Bill backed the Padelford out into the stream, let her slip, and waited for the current to catch her stern. Then we headed up river. It was a glorious spring day, and the Cap was making a special, unscheduled trip to celebrate my birthday. My wife and Bill had conspired to give me an unforgettable day, made all the more memorable by the way it ended.

When lunch was finished, Cap called me to the pilothouse as we neared Harriet Island. “Take her in,” he said, stepping away from the wheel.

“Take her in. Just snug her up between those other two boats.”

“Of course you do,” he said. “Just back her with a full right rudder until you get abreast the bow of that rear boat, then come off her, and let the current carry you…”

Shouting orders
The rest is lost to me. I remember hearing him shouting orders at me and embroidering his instructions with the most colorful and fulsome language. I was amazed that a man of such small stature could hold so much language inside him. He was freighted to the guards with tons of the most flowery speech, and I was pleased I had given him cause to unload so much of it at one time. When he was done, he was floating high on the water. I had emptied him out.

I was apparently able to get enough actual information to settle the boat at the wharf. I was told I had accomplished the task while doing less than $200 worth of damage. When we were ashore he said: “I’ll make a captain of you yet.”

He meant it. He meant for me to be a riverboat pilot when I retired from journalism. “I’ll teach you the river,” he said.

I don’t have many regrets, but that I never joined him again in the pilothouse, whiling away the hours on long stretches of the Upper Mississippi, is one regret I’ll never shake.

It is the custom now to embrace the river. People are moving back to its banks, fishing is better than it has been for 100 years, 10,000 school children a year canoe big hunks of the river as part of the UWCA (Urban Wilderness Canoe Adventures) and the Mississippi is, once again, in favor.

But long before anyone else really cared — long before his run of the river would become a national park — Captain Bill Bowell loved her for what she was, and with his guidance nursed her to the wonder she is today. In Mark Twain’s words, “Behold these two great wonders of nature.”

‘Cap’ Bowell and a loving story of Ol’ Man River