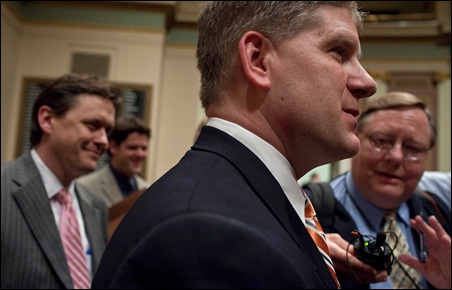 MinnPost photo by Terry Gydesen
House Speaker Kurt Zellers speaks to the press during the Legislature’s final hours on Monday.

I have come to the conclusion that our state government looks like a dysfunctional family. Worse, it looks like a dysfunctional family in debt. The repo man is knocking at the back door to take the furniture, the sheriff is at the front door with a foreclosure notice and the family car is being towed away. And, while that is happening, the family is sitting around the kitchen table arguing about religion.

Minnesota is $5.6 billion in the hole. The governor and Legislature were elected to deal with that elephant in the front room, but like any dysfunctional family, has failed to solve its main problem. It did have time to sit around the conference tables and come up with a gay marriage ban. Even with the grave possibility of a government shutdown looming, Republicans played to the gallery. That’s not governance, nor leadership. It is politics. As I define it, politics is simply the art of getting into office and staying there.

If you were a collector of moral compasses, you would find great pickings on the steps of the state Capitol where hundreds have been lost or abandoned.

If this were a family, one parent thinks we can cut the family’s way back to financial health, and the other says the family needs to tighten the belt, for sure, but adds that it might be wise to go out and find a way to bring a little more money into the household. But such a solution is against his or her religion. So, they end up back at the kitchen table and the more they argue, the bigger the elephant grows.

My fear is that somebody in the family is going to figure out a way to steal the money. It would be easy enough to do. There is a pile of it just sitting there. The people of Minnesota, despite its reputation as a high tax state, chose to tax themselves 3/8ths of 1 percent and passed the Clean Water, Land and Legacy Amendment. Money started pouring in to supplement money budgeted by the Legislature on environmental and arts programs.

A tempting pile of money
Both of the budgets of the Department of Natural Resources and the Minnesota Pollution Control Agency have been gutted. Under the various bills of the House and Senate, millions of dollars have been cut from programs on which citizens rely. When those programs disappear, legislators will hear from constituents demanding the programs be restored. Legislators will be frightened by the only thing that scares legislators — the prospect of being thrown out of office. They will look around, and see that big pile of money from the Legacy Act just sitting there. They will be tempted to restore those budget cuts with all that extra money we voted to set aside.

But that would be stealing. I mean that literally. The Llegislature would be committing an unconstitutional offense if it dug deep holes in the budget and tried to backfill it with Legacy Fund money. The law is clear that the fund’s money can only be used to supplement appropriations. It cannot be used as a substitute. But when you are broke you sometimes turn to desperate measures. It is only a suggestion, but I’d hire a cop to keep a very close eye on the Legacy Fund.

So here we go again with another special session, which, by the way, doesn’t seem as special as they once were. In these tight times, we will pay, roughly calculated, $40,000 a day to legislators to come back and do what they were supposed to do in a regular session. You’ve heard it before, but what if there were a law stating that legislators wouldn’t be paid for working in a special session, and, in fact, would collectively owe the state for all costs associated with the failure to get the job done on time? Would that change how our state business is conducted?

A therapist might suggest that the first step to breaking the cycle of dysfunction (and there can be no argument that the normalcy of “special” sessions has become a cycle) is to force the failing parties to admit they have a problem, and to take responsibility for it. That could start with forcing legislators to give back a day’s pay for every extra day they require to get the job done. It is the standard in the business world. I’d even be willing to pay them a bonus if they got their work done ahead of schedule.

In the meantime, while budgets are being slashed, monitoring and repair of the environment is disappearing and local governments are being forced to raise taxes to cover expenses, Republicans found time to get the gay marriage ban question on the ballot, and whether it passes doesn’t matter. It will ensure their reelection.

The American Psychiatric Association publishes a diagnostics manual that identifies diagnosable conditions. I wouldn’t be surprised if under the classification of dysfunctional we will find the notation: “See 2011 Minnesota state government.”