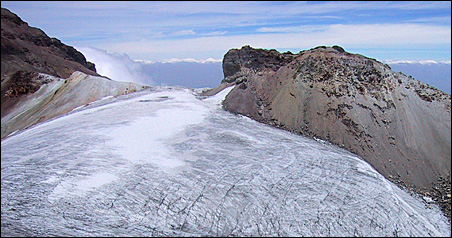 REUTERS/Jose Manuel Alvarez Nieves
Glaciers that crown the Iztaccihuatl volcano in Mexico could disappear by 2015 with scientists pointing to global warming as a chief cause of their demise.

A thermal scientist, a professor of meteorology, a certified genius on the planet’s water and a journalist walk into a bar. The set up cries for a punch line. The reporter should end up the butt of the joke — unless the reporter keeps his mouth shut. Which I did.

It was a bar at 15th and U Street in Washington, D.C. The four of us had gathered after each of us, variously, had attended sessions at the American Association for the Advancement of Science, the Union of Concerned Scientists and the World Bank. Three of the four at the table were among the leading thinkers in America on global warming. There was Professor Scott Mandia, of SUNY’s Suffolk College, Professor John Abraham at the University of St. Thomas, Peter Gleick, the founder of the Pacific Institute and a MacArthur “genius grant” recipient. And, the guy with his mouth agape was me. I kept thinking, “I should have paid more attention in class.”

The three represented a small portion of the global-warming science community which had gathered to talk about why the message of human-induced global warming and its consequences was being overwhelmed by politics, and what scientists could do to make their findings clearer to the general public.

That would explain why I was at the table. I knew Professors Mandia and Abraham. I had been in San Francisco with them at the American Geophysical Union meeting. It was my first meeting with Dr. Gleick and I wanted someone to snap a picture of us so I could tell folks back home that I was hanging with a genius.

In a nutshell, Mandia knows about weather and climate, Abraham knows about the physics of heat and Gleick knows water. I know when I should keep my mouth shut. I strained a muscle in my neck fighting the urge to put in my two cents, but uncharacteristically, I managed silence and simply listened to the smart guys talk.

Noted scientists
Since that evening, I’ve kept in close contact with the fellas, and with about a hundred other noted scientists working on global warming-climate change research. In that short period there has been a slight, but important, message shift. Instead of merely defending themselves against heavily fossil-fuel funded libertarian and conservative think tank scientists for hire, they are starting to counterpunch. It is not in a scientist’s nature to throw punches, but sometimes that is the only way to get the bullies to get the message.

Scientists are often compelled by their education to tell you more about what isn’t known than what is known. That intellectual and academic honesty allows critics to use the scientists’ own honesty as a brickbat to pummel their work. As an example, for the past 20 years when reporters would call and ask whether this flood, or hurricane or that tornado was due to global warming, the entire scientific community studying the effects of increased CO2 in the atmosphere would say, “No single event can be attributed to global warming.” That is the truth, and climate change skeptics will use that honesty to say, “See, there’s no detectible change.” Now, the climate folks have toughened up that language.

It is an important linguistic shift, and it comes at a time more and more reporters are asking the question, because more and more record-breaking weather events are happening all over the world. In our country, Texas is drying up with one of the worst droughts in its history, massive tornado outbreaks in the South, in Missouri and Minneapolis, and the Mississippi is flooding again.

Stronger language
So now the scientists are making their language stronger. They explain, first, that the heating of the planet causes more evaporation, and more evaporation puts more moisture into the atmosphere, and that moisture has to come back somewhere. And, the crazy thing is, it isn’t evenly dispersed as rain and snow. Sometimes it all comes down in one place, so to speak. Sometimes it snows in Atlanta, and sometimes there is no rain in Texas, and what should have fallen on that state gets moved to the Mississippi. Sometimes the moisture builds and combines with temperature shifts and gangs of tornados appear. More of them, and stronger than one would expect.

So, the national Academy of Sciences starts talking tougher, saying “increases of this magnitude cannot be explained by climate noise alone,” meaning this isn’t natural, and suggests what we are seeing is only going to get worse.

Some people are calling it the “new normal.” We, of course, are locked in on the tornado destruction in our neck of the woods, but this is a global problem. A 2004 study showed that “very dry land areas across the globe have more than doubled in extent since the 1970s.” (Dai et al., 2004)

Another scientist I talk to from time to time is Kevin Trenberth of the National Center for Atmospheric Research. His scientific observations find that drought has increased throughout the 20th century while at the same time other studies show that extreme flooding, elsewhere, has increased over the same period. Weird.

So, scientists are changing the message. It is a subtle change, but important. When reporters like me ask the question, “Was the flood, or the drought or the tornadoes caused by global warming?” The scientists now respond, “No single event can be attributed to global warming, but we told you this was going to happen.”

Every serious climate scientist can point to computer models put together years ago that predicted what has been coined as “weather weirding.”

My friend Paul Douglas is fond of saying that “weather is like watching CNN, and climate is like watching the history channel.” He means that you can’t look out your window in Minneapolis and make a judgment on global warming. But, if you look out the window long enough and the weirdness continues, you just might see the evidence of climate change.

Some folks in Joplin and El Paso and Minneapolis are starting to believe what the scientists have been predicting for years. They see it out of their windows, if they have any left.

I grab a cab back to my hotel. When I get there I can’t sleep. Two competing thoughts are keeping me awake. One thought is, “We are facing the fight of our lives!”The other thought is one I haven’t had since I was a soldier. It is: “If there is going to be a fight, thank God I’m in uniform with these guys on point.”