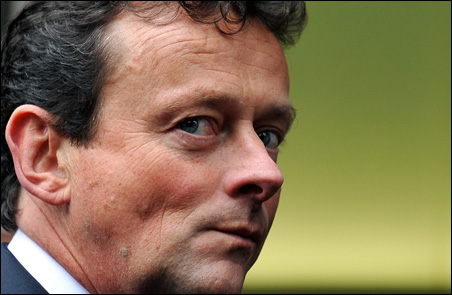 REUTERS/Toby Melville
Tony Hayward has been hired by Glencore as the executive expert in charge of environment and safety.

I kept thinking, “I’m too old for this!” A couple of days ago, I was carrying an 18-foot, 6-inch canoe across the Horse Portage around Upper Basswood Falls. The map says it is a mile long. I’m at the halfway point and I’m certain I’ve carried this beast 10 or 15 miles. Thank goodness there are trees with limbs I can rest the canoe on. I’m also thankful that I have along my sons-in-law, Manny and Matt, who end up carrying the canoe the rest of the way, plus the packs, and if they really wanted me to like them, they would offer to carry me. They offered. I demurred, only because I didn’t want anyone to see such a sight.

Despite it all, the BWCA and the north country of Minnesota are such wonders of overwhelming beauty and peace that no matter how troublesome one’s existence, folks can get their lives back.

Wait a minute! Wasn’t that what British Petroleum’s Tony Hayward said to the press as he surveyed the ruin caused by the Deepwater Horizon explosion and the largest oil spill in U.S. history? Tony just wanted his life back. Gaffes like that ended his leadership of BP. So they gave him about $4 million to go away. Maybe he will end up in Minnesota’s north country. You think I’m kidding? Read on.

Tony Hayward has been recently hired by a company called Glencore. Don’t feel bad if you haven’t heard of it. It has been trying for years to be invisible to the naked eye. It was briefly in the news back in the Clinton years when its founder, Marc Rich, violated federal law by trading oil with Iran and went on the FBI’s most wanted list. Things cooled off fairly quickly because President Clinton pardoned Rich as Bill was on the way out of the White House door. Rich was, well, rich. He gave money to the Clinton campaign. I’m not saying. I’m just saying.

So Glencore ends up being one of the biggest, if not the biggest, commodities traders in the world. It handles everything from metals to fuel and has operations all over the globe. It doesn’t have a very nice record in some parts of the world where it has been accused of mistreatment of workers, pollution and very much worse. Now Glencore is putting its money in northern Minnesota. It is has just become the principal investor in a mining operation planned for Hoyt Lakes.

Hardrock sulfide mining
Iron mining and northern Minnesota have gone hand in glove for a century. But the proposed PolyMet mine in Hoyt Lakes is a different animal. It is called hardrock sulfide mining. It will be going after copper and nickel and precious metals. It promises jobs in a job-starved part of our state. But there are two things you should know about hardrock sulfide mining. The first thing is that the Environmental Protection Agency says hardrock mining generates more toxic waste than any other sector of the U.S. economy. The second thing you should know is that the history of this sort of mining shows that when the metals run out, the companies decamp. The real pollution starts after they leave with the winnings, go broke, or sell out.

Across the country, hardrock mine operations have left state taxpayers holding the bag. The cost of the cleanup falls primarily on folks who had nothing to do with the pollution. After a bad experience, our neighbor Wisconsin made a rule that states that if any company wants to hardrock mine, it has to put up a bond that will cover the expense of cleaning up the mess the company is sure to leave behind.

This next sentence is not a joke. Tony Hayward has been hired by Glencore as the executive expert in charge of environment and safety. Former state Rep. Frank Moe is not laughing.

After serving in the state Legislature, Moe got his life back. He is a guide and outfitter on the North Shore. He also writes a pretty mean letter. Most of his old colleagues have likely received a copy of it by now. In the letter, Moe reminds his old friends that when it comes to considering whether to grant a permit to PolyMet to operate a hardrock sulfide mine, they should consider the other jobs at stake. Not just the 400 or so mining jobs, but jobs like his. Moe says that there are 30,000 people working in the north woods recreation economy. He asks the legislators and commissioners whether tourists will still come north if the rivers and lakes are polluted.

Moe told me: “Sulfide mining has a perfect record. A perfect record of environmental damage. There are no examples of a hardrock mining operation without serious pollution.” He likes the Wisconsin model. He wants PolyMet to make upfront financial assurances that will pay for any and all cleanup costs. He doesn’t want taxpayers stuck with the bill. But, he adds, Polymet says the upfront assurance is a deal-breaker.

Tour of the site
I’ve met PolyMet CEO Joe Scipioni. He is a nice man. He showed me around the Hoyt Lakes site. I asked him about toxic waste and pollution and he said new technology will virtually eliminate the threat. I believe he believes that.

But Frank Moe has a good question. He wonders why financial assurance is a deal-breaker if there is no concern about creating a toxic waste site? Moe says, “They must not believe their own rhetoric.”

PolyMet is just the first of many hardrock mining operations in line to seek permits. PolyMet is outside the BWCA watershed. If there is a pollution problem, it will affect the Embarrass, Partridge and St. Louis Rivers and Lake Superior. The others, if they are permitted to operate and then discharge toxic waste, as nearly every other such mining operation has, the pollution will flow into the pristine boundary waters where I just drank unfiltered lake water. The discharge of toxic waste into the BWCA is not just a pollution problem, it will be, for millions of people, the end of the world. That’s not a pollution problem.

If that happens, I don’t much care whether Tony Hayward gets his life back. I will be wondering where the rest of us will go to get ours back.

Remember BP’s Tony Hayward? He’s trying to get his life back in northern Minnesota