This month at last it became legal to install waterless urinals in Minnesota. You can thank me later, after you stop snickering.

One of my last investigations for WCCO-TV had to do with the strange circumstance of Minnesota being the only state in the union that statutorily outlawed waterless urinals. The snickering began in the newsroom when I pitched the story. There’s just something that tickles the funny bone whenever you suggest an investigation of urinals, waterless or otherwise. 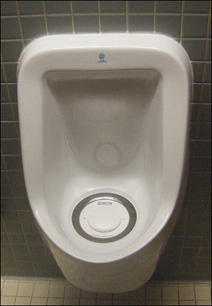 Photo by Bradley Gee
In a company with 1,000 males on staff, waterless urinals would save 1.56 million gallons of water and $21 thousand dollars annually.

It didn’t help that to prove one of my points in the story I was videotaped sticking my head into a well-used waterless urinal and breathing in deeply through my nose. Some state legislators said they smelled very bad. I was trying to prove them wrong with my unscientific sniff. “Smells fine to me,” I said on camera.

I had first seen waterless urinals at “eco-lodge” in the U.S. Virgin Islands. They require no water, because a urinal gets a lot of water as a matter of course. And urine, believe it or not, is pretty sterile and is composed mostly of pure water. These facilities just use a replaceable filter to catch contaminants. Periodic cleaning keeps them odor free.

So, being jazzed about new conservation technologies, I began to preach the benefits of urinals that used no water other than that supplied by the user. The figures on water conservation supplied by the manufacturers were stunning. Independent university-based research confirmed it. One study by Industrial Economics Inc., in Cambridge, Mass., found that in a company with 1,000 males on staff, waterless urinals would save 1.56 million gallons of water annually, and save that company an estimated $21 thousand dollars in water and sewer costs. The U.S. Army Engineer Research and Development Center has reported that such a company could see a payback on the cost of the new urinals in six months to three years.

In fact, in 2005 the state of Arizona made them mandatory in all government buildings. The Department of Defense was ordering military bases to install them. High schools, colleges, airports and National Parks were installing them all over the country. But if you tried to put one in our state, you were in trouble with the law. I wondered why.

It was my contention that the state’s powerful plumbers didn’t like the idea. I postulated that allowing waterless urinals would cut into the profits of plumbers, and plumbers had friends in the Legislature. Waterless urinals need no supply line — the flush water line. They only need the drain line. If a new building went with waterless urinals, it would mean half the pipe and half the hours.

An official of the union later told me that it had some problems with the design, but otherwise liked the idea, with a few tweaks. Forty-nine other states had no problems, but Minnesota did.

As it turned out, Minnesota plumbers would accept waterless urinals if it were made mandatory that a supply line be installed behind the bathroom wall, just in case.

So, after my report, the Minnesota Department of Labor and Industry was given the authority to come up with some code on waterless urinals, and it did. You won’t be surprised that the new law allowing the waterless technology requires plumbers to install a way to get water to the waterless devices.

A good idea went down the drain, along with about 15 million gallons of fresh water wasted. Bruininks can’t be happy about that. He has been visionary on environmental issues and pushed for the LEED standard for the stadium.

Running out of water
All right, I’ll grant you that the phrase “waterless urinals” does sound funny. But the unfunny part of the story is how fast the world is running out of clean water. There are 8 million or 9 million flush urinals in the United States that average three-gallons of fresh water per flush. In a small office in Minnesota with, say, 25 male employees using the standard urinal three times a day, a waterless urinal could save nearly 60 thousand gallons of fresh water a year. Otherwise, with conventional facilities, that water is flushed down the drain to a sewage treatment center and then sent on its way down the Mississippi. Bye-bye Minnesota fresh water.

I apologize that there weren’t more quotes from government officials in this report. I called some of them, but because of the government shutdown, their mouths weren’t working.

So, if you are planning to build a stadium or office building or restaurant or airport in Minnesota, you can now legally consider waterless urinals in your plans. And don’t worry. If you ever change your mind and wish to go back to the old flush urinals, the new state code requires a water supply line for a device that requires no water.

Now isn’t it nice the state of Minnesota’s plumbing advisory board has kept your best interests, if not your pocketbook, in mind?

Why I preach the gospel of waterless urinals