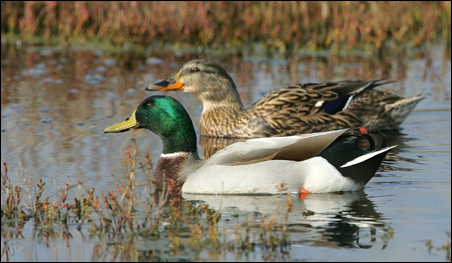 REUTERS/Max Rossi
At Minnesota Valley, the proposal would increase the acreage allowed for duck and goose hunting, deer hunting and upland game.

Lost in the attention given to the efforts of state and federal governments to resuscitate duck hunting in the upper Midwest is a proposal by the U.S. Fish and Wildlife Service to expand several types of hunting on 10 national wildlife refuges, including four in Minnesota.

The aim, if you will pardon the pun, is to tweak the regulations on the public land to get as many people out there as possible — there are 40,000 fewer duck hunters in Minnesota since the turn of the century.

Conservation groups have lined up in support of the changes, and there has been very little opposition. Public comment on the proposal closed on Aug. 4, and Claire Cassel, a spokesperson for the Fish and Wildlife Service, told me shortly before the deadline that 248 comments had been received.

That’s a pretty small number, considering tens of thousands of comments can come in when the feds propose to open up public land to ATVs, say.

“There’s no question we’ve seen a decline in hunting numbers,” said Dave Nomsen, vice president of government affairs at Pheasants Forever. “And we need to get kids outdoors and connected with nature. Hunting can play a role in that effort and it should. The refuge system is a great opportunity.”

Deer and turkey hunting
The biggest change in Minnesota, should the proposal go through, would be to allow deer and turkey hunting in the Crane Meadows National Wildlife Refuge and the expansion of certain types of big game hunting in the Sherburne National Wildlife Refuge. “The Fish and Wildlife Service is committed to expanding these opportunities wherever they are compatible with refuge purposes,” said Dan Ashe, F&WS director, in a statement.

Crane Meadows is between St. Cloud and Little Falls. It’s a relatively new refuge, established in 1992, and is mostly a large wetland complex of scattered plots totaling 2,000 acres that is home to a large nesting population of greater sandhill cranes. Deer have roamed the area for years, and the rebound of the wild turkey population in the last couple of decades has increased its ecosystem diversity. The feds have been authorized to purchase more than 13,000 acres for the refuge once it is finished.

At the Sherburne National Wildlife Refuge, near Zimmerman, turkey and deer hunting opportunities will be expanded, and new areas would also be opened up for migratory bird hunting. Sherburne is also open for fishing.

At Minnesota Valley, the proposal would increase the acreage allowed for duck and goose hunting, deer hunting and upland game. The same goes in the Northern Tallgrass plan.

The Fish and Wildlife Service is proposing these rule changes under the National Wildlife System Improvement Act of 1997. The feds can permit six types of “wildlife-dependent recreation” under the act, including hunting, fishing, wildlife photography, environmental education, wildlife observation and interpretation. “I see the system as following through as to what that act drove,” Nomsen said.

The other refuges with proposed changes are located in Colorado, Louisiana, Mississippi, North Carolina, Utah and Texas. There are 553 units in the National Wildlife Refuge System; hunting is allowed at more than 300 of them. The complete list can be found here, as well as a link to the Federal Register Notice.