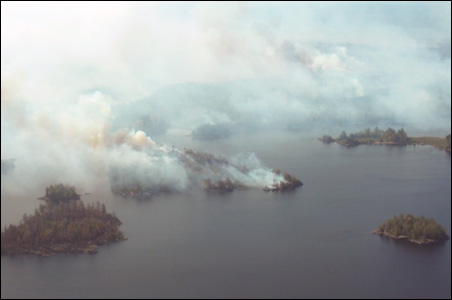 REUTERS
The Pagami Creek fire has charred over 100,000 acres of the BWCA.

In one of those odd life coincidences, my family and I were camping in the Boundary Waters Canoe Area shortly before the thunderstorm came through that started the Pagami Creek fire. About a month later, that fire is at historic levels, with 101,000 acres burned and no immediate end in sight.

Our trip ended uneventfully; in another coincidence, we paddled through the area burned by the Ham Lake Fire of 2007 on our way home. I checked with the Incident Information System upon our return and noted the small fire that had begun near the creek south of the Fernberg Road east of Ely. The Forest Service reported the blaze and decided to let it burn, which is standard procedure. Crews intentionally set fire to about 2,000 acres near the Fernberg to protect property in that direction, but otherwise it seemed like a relatively routine event.

That changed on Sunday when strong winds and dry conditions caused it to explode east-south-east and race 16 miles in less than a day. Now it looks to be one of the top fires in the state’s history in terms of acreage burned.

There hasn’t been much rain since July, and plenty of dried timber is still on the ground from the 1999 blowdown in the path of the fire. Gov. Mark Dayton has called out the National Guard; Manitoba has sent help. Bulldozers are on the south end of the blaze, plowing a fire line, and four Blackhawk helicopters are among the aircraft bombing it with water. Miller Park in Milwaukee closed its roof for the Brewers’ baseball game Tuesday because of the haze, some of which reached Chicago.

According to KARE 11, “the historic Insula cabin, a popular local landmark, was destroyed as fire tore through the forest that surrounds Lake Insula. The cabin was used by conservation workers in the early 1900s, and lovingly restored just last year by the DNR.”

There have been two large BWCA fires since the 1999 blowdown — Cavity Lake in 2006 (32,000 acres) and Ham Lake (76,000 acres) the following year. About half of the Ham Lake fire was on the Canadian side of the border. Remarkably, the loss of life has been relatively small — one death at Cavity Lake and 16 serious injuries between the two of them. Several dozen structures burned in those fires.

The Forest Service is getting very good at evacuating canoeists from fires. I’ve heard from one person who said a Forest Service worker even offered to carry one of his Duluth packs down a portage as they skedaddled out.

A major safety worry is for the firefighters. Valdo Calvert, a retired regional fire chief for the Fish and Wildlife Service, told Minnesota Public Radio what many are thinking: “It’s exposure time for pilots, so every time you’re in the air, something can go wrong.” In all, 230 personnel were on the scene Tuesday, and a reported 500 were working this afternoon.

Minnesotans often think of the Hinckley Fire of 1894 when the subject of forest fires comes up, perhaps because we do a good job of preserving that history in museums and books. And, make no mistake, the Hinckley Fire was a disaster from all perspectives — at least 436 dead, 307,000 acres burned and all or parts of nine communities destroyed.

Other historic fires since statehood include the Cloquet Fire of 1918, which killed at least 453 people and burned 100,000 acres, and the Baudette Fire of 1910, which killed 43 and burned more than 300,000 acres. As long ago as 1735, a French missionary wrote to a relative that he traveled from Lake Superior to Lake of the Woods without “even once catching a glimpse of the sun” because of a fire.

The early 20th century fires convinced state officials to take a more active role in fire and forest management; one result was the creation of what is now the DNR, with its system of regional managers. What will the legacy of the early 21st century fires be?

Freezing overnight temperatures and a little rain helped slow the Pagami Creek fire Tuesday night, and today was cloudy and cool, but there is no rain in the forecast for several days. Officials are saying that the blaze will probably burn until the snow flies.