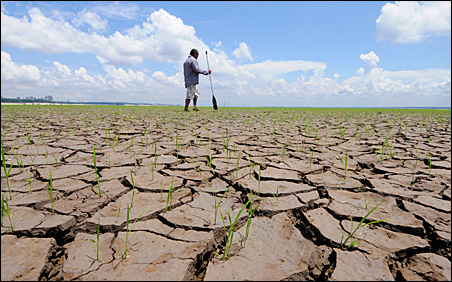 REUTERS/Euzivaldo Queiroz
Seventy-one percent said they thought the planet was warming because humans were dumping too much CO2 into the atmosphere by burning fossil fuels.

Last week I wrote about a new study showing self-described Tea Party members the least likely of all American voters to believe the science that says our planet is warming and humans are causing it.

I interviewed a noted Tea Party official, Randy Liebo, who said that he thought the science had been sufficiently questioned and was so new that public policy shouldn’t be based on it. I told him that some of his objections had been examined independently and found to be without merit. He said he’d like to see it in print, so I sent him investigative summaries and reports. I’ve tried to contact him for his reaction, but I’ve been unsuccessful.

At the risk of turning into a poll reporter, I thought you might like to hear about the newest one. In fact, I would imagine the Republican candidates for president would like to see the findings. Maybe even Congresswoman Michele Bachmann and former governor Tim Pawlenty would be surprised.

Last week’s poll revealed only 34 percent of Tea Party members said they believed the science or were concerned about global warming. But 53 percent of Republicans said they thought it was happening and registered concern. Democrats were the highest rated at 78 percent.

That’s the position of our former governor, Tim Pawlenty. There is little, it seems, that can change that kind of opinion. There is currently no peer-reviewed science of any kind that says the warming we have been seeing is part of Earth’s natural heating and cooling cycle.

Change in concern
One of the reasons that this most recent poll is so striking, and so instructive, is an earlier Gallup poll showed Americans actually cared less about global warming in 2010 than just three years earlier.

Candidates using that older poll to map strategies for debate would have been right to play to voters by saying global warming is not proved, nor a big deal. I would love to be in the war rooms of the candidates this week as they try to reshape a message to fit the Tea Party and the growing number of Americans concerned about global warming. Is the planet warming? “It all depends on what your definition of ‘is’ is.”

Based on the belief that fewer Americans cared about global warming or its causes, Republican presidential candidate Mitt Romney backed away from his firm statements in support of global warming science last week and now says he’s not sure what’s causing it to warm up. 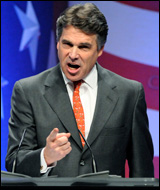 Rick Perry says the whole thing is hogwash and scientists have been manipulating data to prove human-caused climate change. The Reuters/Ipso poll must be giving the candidates indigestion. If the poll is correct, 72 percent of the Republican base is concerned about global warming.

Don’t expect to see candidates doing an immediate about-face on the science. It would seem too political to change a fervently held belief just because the polls change. Plus, there is a straw in the poll at which the candidates may try to grasp. Among the findings by Reuters/Ipso, those people who staunchly deny the science of global warming and the climate change it causes have hardened their positions of denial. They no longer simply deny the 97 percent of the published science, but they deny it more urgently than ever.

That group is in the minority, but they represent voters. It will be interesting to see which candidates stand on their anti-science records and which ones chase the changing opinions of the American voters.

Where the blame falls
The campaigns will likely look at the poll and ask, “How did this happen?” The answer may be found in the Republican campaign strategy book.

The poll seems to show that the recent campaign appearances and debates staged by the field of Republican candidates has focused Americans on the concern about global warming. The more the candidates talk about the “unsettled” nature of the science, the more the public has become interested in trying to figure out what the science actually says. Playing down global warming, the poll indicates, has had the opposite effect on voters. The law of unintended consequences has turned on the candidates who deny the science, and bitten them on the backsides.

There is another reason why this poll seems so radically different from the Gallup survey. Weather. Usually atmospheric and climate scientists don’t like to link a weather event to overall warming. One really can’t make informed decisions on climate by looking out of the window on a single day. But Texas has been looking out the window on the worst drought in its history for a long time. The huge storms and flooding across the globe and the amount of rainfall from a Category I storm, Irene, has apparently begun to work on the minds of the respondents.

It is actually true that we have never seen weather like this before. It is also true that scientists have been predicting changing weather patterns with the heating of the planet. The evidence is pushing Americans from “Hoax” to “Probably not” to “Maybe.” The “Maybe” voters appear to be in ascendance. It will be great fun watching the candidates of all parties chasing that growing body of the population.