Next month, a new book will go on sale, and every voter in the country should read it. It is called “Fool Me Twice: Fighting the Assault on Science in America.” It is written by a Minnesotan of national reputation.

Shawn Lawrence Otto is probably best known as the screenwriter who wrote “House of Sand and Fog,” starring Sir Ben Kingsley. It was nominated for the Academy Award. He lives in Marine on St. Croix with his wife, State Auditor Rebecca Otto. 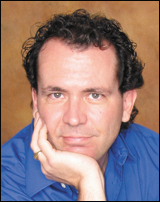 “Fool Me Twice,” as its title implies, takes aim at a frightening phenomenon in the United States of creating national policy based on political ideology rather than known science. Otto traces its roots and follows its history. He reminds us that the greatness of the U.S. economy has risen because of our strength in science.

He told a stunned audience at a Nobel forum two years ago that there are authoritative predictions that 90 percent of scientists and engineers in the world will be working in Asia by mid-century. The take-away is that if this country continues on its anti-science path, our children should prepare to be overshadowed as the United States becomes more and more inhospitable to science.

Otto was spending time this past holiday weekend at his cabin. He spent some time talking to me about his concerns and his book.

“You know what Thomas Jefferson said?” asked Otto. “He said, ‘Whenever the people are well-informed, they can be trusted with their own government.’ If that is true, and I believe it is, then democracy is in trouble.”

Presidential campaign
Shawn was so troubled by the lack of science being discussed in the late innings of the last presidential election that he co-founded with a friend Science Debate 2008 and launched a website and a well-supported effort to get the candidates, on both sides, to sit down in Philadelphia to debate matters of science as they relate to public policy. It was important to Otto because, he said, he understood that much of our economy, our budgets and our future are based on the understanding of the sciences.

He booked a hall in Philadelphia and contacted the candidates. “We reached out to all of the candidates, Obama, Clinton, McCain and Huckabee. They ignored us. [McCain and Obama eventually answered 14 questions on science, but did not debate.]

But Otto hasn’t ignored the problem. He is already working on a similar plan for the 2012 elections. You can learn more about that here.

“When politicians put party ideology ahead of scientific fact in making public policy,” said Otto, “they run afoul of history.” Otto says it doesn’t matter whether the politicians are ignorant of the science, bought-and-paid-for lackeys, or party puppets — the result is always the same.

I ask him, for example, whether Sen. James Inhofe of Oklahoma isn’t an example of democracy in action? He represents a large constituency reliant on fossil fuels. Inhofe fights government regulation and calls global warming science a hoax. Otto answers, “What Inhofe does is dishonest. I have no problem with politicians who acknowledge data, knowledge and science and then debate the public policy on that basis. Inhofe just denies the science.”

History lesson
“When politicians put ideology ahead of scientific fact, you get trouble. It happened in the old Soviet Union, in China, in Nazi Germany.The Lysenko affair under Stalin set that country’s agriculture back 40 years.” 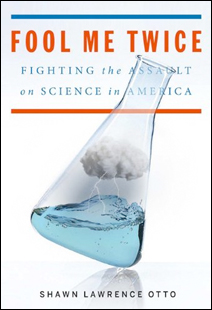 Trofim Lysenko was an agronomist who convinced the Communist Party that he’d developed a new type of agriculture. He climbed the ideological party ladder. His opponents, mostly scientists, said his ideas wouldn’t work and proposed developing genetically superior seed stock for the Russian land. Many of the scientists who opposed Lysenko’s ideology-based farming programs were imprisoned or executed as bourgeois or fascists. Lysenko’s Communist-Party-inspired agricultural reforms failed, and the Soviet Union is still trying to catch up.

Otto continues: “It didn’t work for the Maoists during the great leap forward when Chairman Mao banished most scientists and intellectuals as traitors. The Chinese scientists were accused of not following party doctrine. They, nevertheless, insisted on science. And so China ended up putting into place agricultural practices that led to the greatest famine in human history.

“Journalists are supposed to investigate and find the facts and tell us,” says Otto. “Journalists go after two sides of a story equally, even when the facts don’t support equal attention. On global warming science, 97 to 98 percent of the known facts are on one side, yet, often both sides are given equal time.”

Otto observes that “journalists are going to weight the media toward the extreme position.” It is sometimes called “false balance.”And, quite often, the other side is not coming from other scientists but public relations experts working for industries which might suffer if government acts on the science.

I ask Otto if the voters were to understand that they are being manipulated by PR people, would things change. Otto responds: “No. Unfortunately, politics have become team sport. It’s like the Vikings versus the Packers. All that seems to matter these days is continuing to root for your team and divorce ourselves from reality in political decision making.”

Of the 535 members of Congress, only 2 percent have any background in the hard sciences. Most voters don’t know a great deal about science, but Otto’s polling shows Americans with a great hunger to know more about the sciences. The National Academy of Sciences (NAS) was set up to inform the nation on these issues. The president who formed the NAS felt, as Jefferson did, that a well-informed electorate ensured the future of democracy. The president who established the National Academy of Sciences was Abraham Lincoln.

Many years later, an enlightened government set up the Office of Technology Assessment (OTA) to inform Congress of the most recent science and the most pressing science matters facing the country. Fifteen years ago, Congress disbanded it to save money. Sometimes, it seems, it might be better to light one candle than to curse the darkness.

Otto concludes the conversation this way: “You asked why I wrote the book? Really, I wrote it for my son. No matter what political party he chooses to join or not join when he grows up, I want him to live in a country and a world where he has a fighting chance at the kind of life we all want for our kids; a life of health, freedom, prosperity, and a beautiful clean world to live in. That’s why I’m really doing these things — for him and all the kids like him, who must live with our choices. Seeing the science I have seen, if I didn’t do anything, what kind of parent or citizen would I be?”