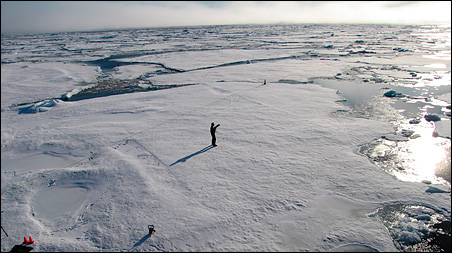 Sometimes people tell you things you already know. Every week or so, somebody comes up to me and says, “You’re Don Shelby.” I already knew that. During the summer, when I have my shirt off, someone will notice and say, “You have a giant compass tattooed on your back.” I am painfully aware of that as well. It is hard to forget sitting in the tattoo parlor and feeling like I was on fire for six hours. But there it is: a big, antique-looking compass on my skin.

Some people notice that when you look at the initials of the cardinal points North, South, East and West, you get NSEW. But if you rearrange them you get NEWS. Clever? Not really. I didn’t realize the cleverness for about a year. But it has served as a simple explanation for “Why a compass?”

I collect journals of arctic explorers and the search for the fabled Northwest Passage. I also collect explorers. I am lucky to know Will Steger, Ann Bancroft and Paul Schurke. They’ve all been there. Before he died, I got to know Ralph Plaisted. He went to the North Pole once, on a snowmobile. Someday, I may go myself. If I don’t hurry, I may have to get there by canoe.

The North Pole isn’t on land. It is on ice. Stick a flag at the pole when you get there, and by next week the ice has moved and the flag just marks some undistinguished part of the vast Arctic Ocean. But by 2085 or thereabouts, the Arctic Ocean will likely be free of ice. No place to stick a flag. A Russian admiral dropped one to the bottom of the ocean at the North Pole and claimed its vast resources for his country. You can read the story here.

On my bookshelf are works by Beechey, Ross, Parry, McClure and Franklin. These guys weren’t trying to get to the North Pole, they were trying to get to China by sailing wooden ships into the frozen Arctic Ocean. Hundreds of stalwart men died trying to find the sea route to Cathay and the riches of the Orient. Some of them would be frozen into the pack ice for years, surviving on limited rations, lichens, shoe leather and, sometimes, a morsel of a dead comrade.

Commander Robert McClure made the passage first. He made it part of the way in a boat, got stuck, nearly died and was hauled across the impassible ice to another ship, but he made it and was knighted.

The first person to make it through the whole Arctic Ocean by boat alone was Roald Amundsen. He later became the first person to reach the South Pole, beating Robert Falcon Scott. He left a nice note for Scott, who made it to the pole later, then died on his way back.

Now, cruise ships are lining up to take paying customers through the Northwest Passage. There are times when the passage is as open as the Mississippi in June. If you like the idea of a cruise in the Arctic, you can thank global warming.

Conference on Arctic
There was a conference this past week at the Humphrey Institute, co-sponsored by the Will Steger Foundation, the Canadian government and the University of Minnesota’s Institute on the Environment. I attended with the kind of sadness that one attends the bedside of a dying friend. It never helps when the doctors put their hands on your shoulder and say, with conviction: “You know your friend, here. He’s going to be dead soon.” Is there nothing you can do? “Not really,” says the doctor. “Just get used to it, and prepare.”

The Canadian consul general for the Upper Midwest, headquartered in Minnesota, is Martin Loken. He is proud of Canada’s efforts to ward off the climate change that comes with global warming.

“We are committed to reducing our greenhouse gases by 17 percent by 2020,” he told me. “Here is a little known fact: 78 percent of Canada’s electricity comes from non-emitting power sources.” Most of that is hydro-electric, with some nuclear, and he said, “Solar and wind is coming along.”

Canada and the Arctic, along with its indigenous cultures, are the first victims of global warming. I’ve seen how life is changing for the Inuit as the sea ice disappears. I spent some time on Baffin Island with Will Steger and Sir Richard Branson to observe the effects of global warming on a people.

The Inuit leaders with whom I spoke told me to tell the people in the south (which is anywhere not in the Arctic) that “we will adapt.” People who have thrived through tens of thousands of years in a place where wintertime temperatures drop to 70 degrees below zero have adaptation pretty well figured out.

Science on melting
The science is clear about what the melting of the Arctic Ocean would likely do to the planet. Frozen ice is white and reflective. Heat coming in from the sun is reflected off the ice into space. When the ice is gone, the Arctic Ocean turns dark and absorbs the heat. Some scientists worry the warming could melt substances called methane hydrates trapped in the frozen floor. The release of trapped methane, a greenhouse gas with 25 times the heat trapping power of CO2, would warm the planet quicker than adaptation could handle. Even if that doesn’t happen, which is possible, the warming of the Arctic Ocean spells trouble for the entire planet. Sea level won’t rise if the ocean ice melts. It is floating like an ice cube in a glass of water. When the ice melts it doesn’t raise the level of the water glass. But, next door, the glaciers on Greenland could melt, and that would cause serious problems for coast dwellers, and make some island countries disappear from the map.

Here’s the crazy part. It is estimated that 30 percent of the world’s natural gas and 13 percent of its oil is beneath the surface of the Arctic Ocean. President Obama has just lifted the moratorium on offshore oil exploration in the part of the Arctic Ocean under U.S. control. Estimates suggest there are 27 billion barrels of oil available in the Beaufort Sea. Shell Oil will begin drilling soon. So, while one of the stated objectives of the Arctic Council, representing the border countries of Arctic Ocean, is to identify the causes of global warming, the United States, a member of that council, is permitting a process whose product is one of the chief causes of global warming.

2012 has been named the International Polar Year. It will be marked by a big conference in Montreal. I think I will explore the possibility of attending, with my tattoo. It will be interesting to see whether anyone attending has a moral compass on them.