On Nov. 18 the celebrated historian, Dr. Douglas Brinkley, testified before the U.S. House Natural Resources Committee. The committee was taking testimony on another congressional effort to open the Arctic National Wildlife Refuge (ANWR) to oil exploration and drilling.

Brinkley was there to suggest that the ANWR be designated a national monument, preserved and protected. Brinkley knows about conservation. Among his award-winning publications and best-selling books is “Wilderness Warrior” about Theodore Roosevelt’s environmental policies. His most recent book, “The Quiet World,” traces the history of Alaska’s wilderness. He’s currently writing a new history on the conservation movement in America.

After Brinkley delivered his testimony, Rep. Don Young, R-Alaska, walked into the hearing late. Please watch this short clip of what happened:

By way of full disclosure, Dr. Brinkley is a friend of mine, but had Dr. Brinkley been a stranger to me, I would still be mortified that a United States congressman would treat a guest of the House in such a fashion. I hope this piece of video is seen by as many Americans as possible. I shouldn’t like people in other countries to see it. We still have an image to uphold in the world. Young makes it look like the most powerful nation on earth is run by the inmates of the asylum.

You may also notice that Dr. Brinkley doesn’t suffer fools gladly. I talked to him about the confrontation. He told me: “I felt like I needed to hold my own against them. I feel good about it.”

He continued: “I’m a historian and I read a lot of testimony. It is important to me to have an accurate record. I thought I needed to set the record straight for CongressmanYoung. My name is not Dr. Rice, it is Dr. Brinkley.”

That is certainly part of it. It is likely, as well, that Brinkley had studied the history of Congressman Young before he arrived at the hearing. Brinkley told me he knew that Congressman Young, at another hearing, had waved a walrus penis bone at Mollie Beattie, the incoming chief of the Fish and Wildlife Service. Brinkley may have read the Rolling Stone article about Young that quotes the congressman as saying, “Environmentalists are a self-centered bunch of waffle-stomping, Harvard-graduating, intellectual idiots.” The quote continues, “[They] are not Americans, never have been Americans and never will be Americans.”

I don’t think Congressman Young would have dared say such a thing to Teddy Roosevelt’s face.

Missed votes
Brinkley should not have been surprised that Congressman Young showed up late and missed the bulk of the historian’s testimony. Young is often cited as the congressman missing more votes than any other member of the House. Brinkley would have known that Young was the co-sponsor, with discredited Alaska Sen. Ted Stevens, of the bill to pay for the infamous “bridge to nowhere.”

Brinkley told me: “Everyone knows that Young is just a menacing blowhard. He has a history of being rude, he browbeats and he’s snotty toward anyone who cares about the environment.”

I asked Brinkley if he was surprised that Committee Chair Doc Hastings took Young’s side and continued lecturing the historian. “No,” said Brinkley. “They are tied together at the hip. They are both oil company factotums. They are a tag team.” 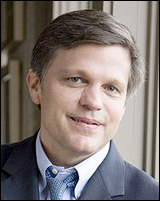 “Eisenhower created it as a refuge,” Brinkley said.

So Brinkley suggests a new name and new status for ANWR. “I think it should be called the Dwight Eisenhower National Monument,” he said.

But what about the oil?

According to the United States Geological Survey, there is a good deal of oil beneath the coastal plains of the ANWR. But there is, in relative terms, very little when compared to world demand. Pump it dry and it would be emptied in less than a year.

Another Republican congressman, Roscoe Bartlett of Maryland, always votes against drilling the ANWR. It makes him unpopular in the caucus room. But the old biology teacher-turned congressman doesn’t object to drilling on environmental grounds. Bartlett told me that he votes against draining it now. He thinks it is smarter to save it for future generations who might need it, and use it more efficiently.

Bartlett doesn’t think it is wise to pump the ANWR dry just to consume it in highly inefficient cars and trucks. Bartlett drives a Prius, which is another thing that drives the caucus a little crazy.

Same argument
Young chided Brinkley by saying that no one ever goes to the ANWR. Brinkley told me, “They used the same argument when considering whether to set aside the Grand Canyon. ‘Nobody ever goes there,’ they said.”

The Grand Canyon is back up for debate, by the same forces who wish to open the ANWR for oil drilling. Congress is considering bills to open up areas near the Grand Canyon for uranium mining. It was being rushed through until someone noticed that the company doing the mining was from Russia, and no one had checked whether there were any safeguards preventing Grand Canyon uranium from going into Iranian nukes.

“Our park lands, our treasured areas are under attack,” Brinkley told me. “We fought hard to protect these wild places and that makes the United States unique. China is destroying its landscape. We have a history of preserving ours.”

Brinkley believes Young and his ilk have another reasons for going into the ANWR, and it has nothing to do with oil. “I think they believe,” he said, “if they can open up the ANWR, molest it piece by piece, they will demoralize the whole environmental movement.”

Brinkley believes, as Young has made clear, there are members of Congress who see people who would protect wild places as the enemy of the country. “The Coastal Plain of the ANWR has an unbelievably rich marine environment,” Brinkley said. “It is where the caribou calve. It is where the polar bear den.”

To Congressman Don Young’s ears, such talk borders on treason.

Brinkley has a ready response. “Congressman Don Young is a low-grade Joseph McCarthy.”