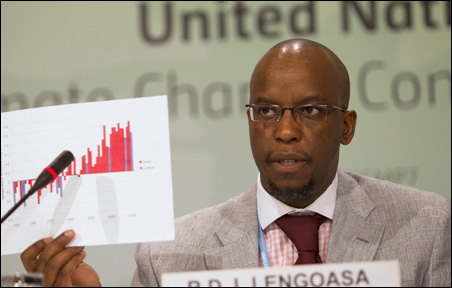 The World Meteorological Organization (WMO) says the planet is getting warmer.

“Our science is solid and it proves unequivocally that the world is warming and that this warming is due to human activities,” Lengoasa told reporters.

The WMO also announced that 2011 will enter the record books as one of the hottest years on record, but not as warm as 2010 which stands in as the warmest year since records have been kept.

In Minnesota, records were set in July, even though (with one exception) no 100-plus degree days were recorded, according to Mark Seeley, climatologist with the University of Minnesota.

In the Twin Cities, he said, “the heat index at midnight on July 20th was still 100 degrees F, perhaps the only time it has been so high that late at night.”

Seeley noted that on July 19 an all-time high dew-point level was achieved with a reading of 82 degrees F. (All of these new readings have yet to be certified, he added.)

Warmer nighttime temperatures have long been predicted by atmospheric scientists as an effect of greater CO2 concentrations in the atmosphere.

The international weather monitoring organization also reported that 2011 arctic sea ice volume was the lowest it had ever recorded.

The overwhelming majority of climate scientists say that such a level of warming could trigger irreversible changes in weather patterns, agriculture and human health.

A warming climate is capable of adding a substantial amount of moisture to the atmosphere, and scientists have long predicted the additional moisture would fall as heavy winter snows or spring rains.

Seeley pointed out that 2011 was the third year in a row of major spring snowmelt flooding along the Red River Valley.

The Intergovernmental Panel on Climate Change (IPCC) released a report earlier this month drawing a link between extreme weather events and global warming, while cautioning that not every weather event can be traced to a single cause.

The WMO’s report on the average global temperature this year puts 2011 in the top 10 hottest years on record.

The full text of the WMO global climate status report is here.