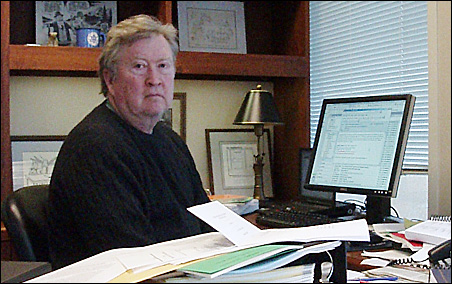 In the fight for the environment against those who would harm it, one of the country’s top soldiers in that battle has retired from the field.

He is Minneapolis attorney, Brian O’Neill, and the military analogy is apt. The son of an army officer, he grew up all over the world as his father’s assignments carried the family to the distant corners of the earth. Brian attended the United States Military Academy at West Point. As an army officer he specialized in field artillery until he took a leave to get his law degree. Upon his graduation, he joined the staff of the general counsel’s office in the Pentagon. He is retiring, not retreating. Retreat is not a word in O’Neill’s field manual.

O’Neill never lost the fire to engage an enemy. In his legal career he took on forces determined to change the nature of the Boundary Waters Canoe Area Wilderness. He fought those who attacked the Wilderness Act. He was in the frontlines of the fight against those who would lift the protection of wolves. And he took on the biggest oil company in the world after the Exxon Valdez ran aground at Bligh Reef in Prince William Sound, Alaska, in March, 1989.

Native Alaskans and commercial fishers sued Exxon, now Exxon-Mobil. There were 32,000 of them who had lost their livelihoods to the spill. It was the most expensive trial ever held in the United States. O’Neill argued the case in Anchorage and the jury awarded those harmed $5.3 billion. O’Neill told those for whom he fought, “The justice system worked.”

But Exxon appealed, over and over again. Exxon filed more than 60 petitions and appeals over the history of the case. The Ninth Circuit Court of Appeals cut the award in half. Exxon filed for more extensions and more appeals. Nearly 22 years after the spill, the case was taken up by the U.S. Supreme Court. In a 5-3 ruling, the original jury verdict of more than $5 billion was reduced to $500 million.

I talked with O’Neill shortly after the verdict. He would have to go to Alaska and tell his clients something that broke his heart. Not only would they be getting little money, and Exxon’s promise of making them whole would never be kept, but he would have to tell them that “The justice system had failed. The Supreme Court protected Big Oil.”

He wouldn’t be able to tell them all. In the 20 years it took for the case to be settled, strung out by Exxon lawyers, nearly 8,000 of the original plaintiffs had died. Because the spill had knocked out the herring and most of the salmon fishery in the most abundant waters in North America, purse seiners and high-liners were putting their boats up for sale for pennies on the dollar. Licenses to fish, costing up to $350,000 each and kept as family nest eggs passed and from one generation to the next, were being sold for a tenth the value. The vibrant fishing villages of Prince William Sound saw dramatic increases in alcoholism and suicide, and the village societies began to crumble.

More than clients
O’Neill took it all personally. Over the 20 years he fought Exxon, the people in Alaska he represented became much more than clients. They became friends. And, like a friend, he went to hell and back for them.

By 1995, the National Trial Lawyers for Public Justice named Brian O’Neill Trial Lawyer of the Year.  They should have given the old warhorse the Silver Star, for bravery above and beyond the call of duty.

The firm he worked for during those years was Faegre and Benson, now Faegre Baker Daniels.  Law firms come in for criticism often enough, but in the Exxon Valdez case, the firms spent $180 million in time and litigation expenses and poured in more than $30 million in cash.  Had the $5 billion verdict stood, the firm would have gotten rich. It didn’t.

I traveled with O’Neill to Cordova, Alaska, before the Supreme Court decided to hear the case.  Cordova was the center of operations for WCCO-TV’s coverage of the spill in 1989 and I had spent a lot of time wading island beaches slimed with oil. Nineteen years later, with O’Neill and a marine biologist, I went back to the same island. Despite Exxon’s claims that the pristine waters of Prince William Sound were back to normal, I dug six inches into the sand, and an oil slick rose to the surface.

People forget just how bad it was. The plume of 11 million gallons of oil from the Exxon Valdez eventually covered an area equal to the entire west coast of the United States from Seattle to San Diego. Though larger, the BP Deepwater Horizon spill in the Gulf of Mexico has done less damage.

Retirement event
O’Neill’s wife, Ruth, invited me to a downtown get-together for Brian’s retirement. He was presented with gifts and mementos and Faegre Baker Daniels partners spoke glowingly. When it was his time to talk, Brian O’Neill, in front of some of the most successful and powerful attorneys in Minneapolis, said, “I hope that big firms will always find a way to help people.”  The room fell reflective. Most of the people in the room were a long way from their idealism.

I asked O’Neill what he was going to do now. He said he and Ruth had some trips planned to Europe. Traveling for pleasure seemed to appeal to him.

I asked him if he’s going to miss the law. “I am weary of taking on other people’s problems,” he said. “It has been a burden.”

That simple statement sums it up for me.  He fought for his clients as hard as he did because he carried their burden, emotionally, as much as they did. You don’t find a lot of attorneys like that.

I wondered if he’d ever get back into the practice of law. “No, not in a formal way, I don’t think,” he said. He mentioned that there were good lawyers he’d mentored who were willing to fight for the environment.” “One of them is representing the Vietnamese shrimpers down on the Gulf who are suing British Petroleum,” he said.

Then he seemed to focus on the middle distance, and maybe his pulse quickened. Old soldiers do that at the sound of distant fire. “Maybe when I get back from Europe, I’ll go down there and give him a hand.”