It may come as no surprise to regular readers of this column that I am a fan of Henry David Thoreau. I have read all of his works and possess a handwritten page from his journals. I’ve walked the shoreline of Walden Pond and stood on the spot where he built his tiny cabin. I have visited his grave.

Darby Nelson likes Thoreau even more than I do.

Nelson has written a book with the title “For Love of Lakes.” It is a finalist for the Minnesota Book Award. Darby draws his inspiration from Thoreau and has packed the new book with observations both emotional and scientific, much like his muse.

Unlike Thoreau, who denied he was a scientist, Darby Nelson is very much one. He holds a PhD in aquatic biology. He taught the subject and environmental science at the college level for 35 years. But he likes nothing so much as paddling a canoe with his wife, Geri, on some of the country’s most interesting and unusual lakes.

Like Thoreau, Nelson is passionate. When scientists get passionate, folks worry. They believe science is conducted in emotionless vacuums driven by the data, and only the data. Nelson makes no apologies. “It is a contradiction in me that I can’t easily explain,” Nelson says.

Each chapter of “For Love of Lakes” is a new journey. Each lake he visits is both laboratory and holy place. What he finds most often is desecration. “We love our lakes,” Nelson says. “We all say it, and I think we all believe it. But we are participating in their destruction. What is going on here? How do we explain this paradox?”

Nelson, the scientist, explains water columns, and why lakes grow dense with algae and why fish die as they struggle with finding a healthy place to swim in an unhealthy lake. He takes us to one of the clearest lakes on the planet, Lake Nellie in southern Ontario. It is beautiful to behold, but void of any life whatsoever – death by acid rain. The cause of the acid rain is inexorably traced back to we who love our lakes.

A passage from the story of Nellie: “By 1970 lake acidity had increased one hundredfold. Its fishes died. Its plankton died. Its insects died, and so did the algae and plant life. If, to you, a lake is simply a body of water, clean and pure, you would love Nellie. But, if a lake means lily pads, minnows and gulls and myriad other creatures great and small dancing the grand dance of life, you will have a hard time holding back the tears.”

Scientists don’t cry, do they? Ecologists call Thoreau America’s first limnologist, the official terms for scientists who study lakes. Thoreau politely turned down an invitation to become a member of the American Association for the Advancement of Science. He wasn’t so polite in his journal, writing, “They [scientists] don’t believe in a science which deals in higher law.” Thoreau could cry. 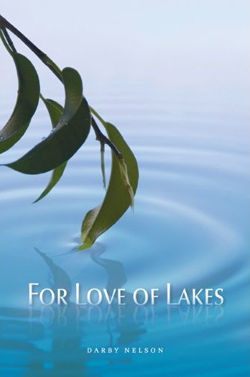 Nelson admits a dual allegiance. He is committed to the immutable laws of physics and chemistry. He also believes in abiding by the laws laid down by the human heart. “If you want to change someone’s behavior, go for the heart,” he says.“That’s where decisions are ultimately made.”

So Darby Nelson wrote a book. It may be one of the most important things he’s ever done. It may accomplish more than his three terms in the state Legislature, or his work as a college professor or as a scientist or as president of the board of Conservation Minnesota. He is being asked to speak all over the country. Fifty-five engagements, he told me, at the last count. Lake associations in Maine, Vermont, New Hampshire, Wisconsin and Minnesota already, and the book has been out only three months.

Nelson told me, “I am a scientist, and I rely on data, experiments, hypotheses and rigorous field testing. But, I am convinced that if the science tells us that humans are doing harm, then you can’t get them to stop by handing them a brochure filled with data. You’ve got to touch their emotions.”

That, in itself, may be a discovery of sorts. “It is a hard thing for a scientist to admit,” says Nelson. “But that is what the data seem to be saying.”

But won’t scientists say Nelson has abandoned objectivity by becoming an advocate for an outcome – the saving of our lakes?

Nelson responds forcefully: “I have absolutely become an advocate for an outcome. I am advocating for what people have already said they want – living, clean lakes.”

To make his point Nelson reminds me that Minnesotans are willing to pay steep prices for a running foot of lakeshore, and points to a 2004 Bemidji State University study showing that property values for lakeshore homes and cabins are much higher if those properties are on lakes with clean water. I read the report, and Nelson is right.

So, Nelson suggests, our lakes could be saved if cabin owners simply give up the idea of having a golf course lawn at the lake, and letting a five yard strip of native plants take hold between the lawn and the shoreline. Not only would the property hold its value, he says, “But look at the gasoline you’d save by not having to mow.”

In August of 2010, Gov. Tim Pawlenty rejected just such a proposition put forward by his own commissioner of the DNR.

“I hope the Republican-controlled Legislature will give the shoreland zoning rules another look,” Nelson says.  “There are Republicans who support it, but they tell me they can’t get it approved by their caucuses.”

In the meantime, the Minnesota Pollution Control Agency is finding 40 percent of lakes tested in the state don’t meet minimum standards.

At the end of his life, after visiting Minnesota to find respite from the tuberculosis that would kill him, Henry David Thoreau at last admitted, “I am sadly scientific.”