In 2008, Minnesotans voted to levy a new tax on themselves. The Legacy Act, as it has come to be called, was a referendum asking whether Minnesotans cared enough about clean water, parks, trails and the arts to tax themselves even heavier.

Overwhelmingly, the people said yes to an increase of 3/8ths of 1 percent to make things better than they were. That new money was supposed to go into a kind of lock box and used only to supplement existing budgets. Or, so the voter thought.

In fact, the amendment made it clear that the money raised from the new taxes couldn’t be used as a substitute for the normal budget appropriations. In the terminology of accounting, such substituting it is called “backfill.”

Opinions on budget actions differ
It is tempting in tough budget times to cut the budget of a program, and then backfill the cuts with Legacy funds. If the Legislature did that, though, it might be committing an unconstitutional act. Opinions differ.

A recent report by Conservation Minnesota, with references to the work of the Office of the Legislative Auditor, pointedly suggests that backfilling is going on. Those who have engaged in the questionable activity argue that there is a way to stay within the letter of the law, but environmental groups say the practice violates the spirit of the amendment and goes against what the voters expected.

Paul Austin, of Conservation Minnesota, says plainly, “If it walks like a duck…” 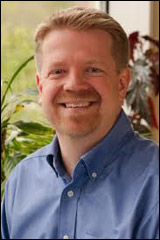 What I think he means is that stripping budgets and then filling the gap with money from the Legacy Fund constitutes backfilling , no matter what one calls it. You can read the Conservation Minnesota analysis here. [PDF]

There is something about how the Legislature has gone about this practice that interests an old investigative reporter like me. There suddenly appeared a huge cache of money from the amendment dedicated primarily to conservation measures, and coincidentally, five conservation agency budgets in the state were cut in the last session by 16.5 percent.

The Pollution Control Agency general fund appropriation was cut by 40 percent. Other agencies were cut between 5 and 10 percent.  Why conservation agencies? Maybe because there was a big pile of money in the Legacy Fund. Interesting.

The most egregious case may be the Clean Water Partnership. As you can see from the graph below, the partnership received stable general funds from 2006 through 2011, with $2.5 million added on top of it from the Legacy fund.

Conservation Minnesota’s Austin believes that is what the people of Minnesota expected.  But, look what happens in 2012-13. The general fund contribution to the Clean Water Partnership is cut by 83 percent. Legacy funds now make up more than 70 percent of the funding. 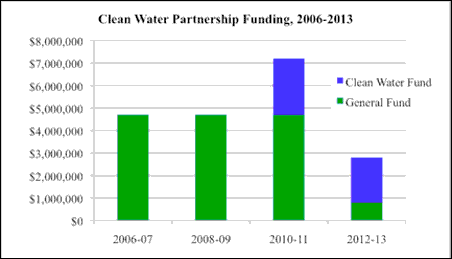 Source: Conservation Minnesota
While other agencies had their funding cut by 5 to 10 percent, the Clean Water Partnership had its general fund portion cut by 83%.

To the naked eye, that looks like the Legislature has substituted Legacy fund money for general funds. That violates the spirit of the law, and Austin says it is not how the amendment was supposed to work.

The legislative auditor has looked into the substitution-vs.-supplement concerns. The auditor’s report finds that only the source of funding need be maintained, and not the level of funding. According to Conservation Minnesota’s analysis, “Traditional funding for conservation could be slashed to virtually nothing, leaving Legacy funds as the sole source of funding, as long as even one dollar of the traditional funding source was preserved.” It adds, “We do not believe that this is what the public intended in passing the amendment.”

Nevertheless, the auditor’s office has recommended that the Legislature create a review procedure to track information on past funding sources and levels for project receiving Legacy dollars.

I provided Gov. Mark Dayton with a copy of the analysis and Conservation Minnesota’s claim that the Legislature is slashing traditional appropriations to conservation agencies and substituting Legacy money in the place of general funds.

The governor told me that he intends to take up the matter with House and Senate leaders. But, that was before Senate Republicans voted to reject the confirmation of Ellen Anderson, Dayton’s choice as chair of the Public Utilities Commission. I’m not sure whether the governor is on normal speaking terms with the Legislature’s leadership these days.

There is no question in tight budget times, and when the state faces budget deficits like we’ve seen in Minnesota recently, cuts must be made to balance the budget as the Constitution requires. No one in the environmental community expects conservation and water quality programs to be safe from the budget ax.

Maybe it is time to ask the people what they were thinking when they voted to add another layer of taxes on themselves. Covering the voting that day, I thought it seemed clear that those voting for the amendment were convinced they were voting for additional money for conservation programs. The voters I spoke with said that Minnesota needed to do more than it was doing to protect the state’s rivers, lakes, streams and parks, along with arts-related activities. If they knew, before walking into the voting booth in 2008, that they were being asked to vote to raise their own taxes just to keep things they way they were, or worse — I’m not sure whether anyone in their right mind would have voted for the Legacy Amendment.

As they say, desperate times call for desperate measures. A $5 billion state budget shortfall qualified as a desperate situation. The coming two years appear rosier. The temptation to raid the Legacy fund to make up for drastic budget cuts may pass, and the voting public may forgive this form of political knavery.

If, on the other hand, the Legislature decides cutting conservation and water quality budgets and plugging the holes with Legacy funds is the way to go, then the 56 percent of voters who approved the amendment may not be willing to forgive.

With Legacy fund ‘backfilling’ of budget cuts, Legislature seems to be breaking spirit of the law