Guy walks into my house and says, “So, this is where Paul Magers lives.”

That’s how my first experience with the Parade of Homes started. I’ve told you about the energy-efficient home my wife, Barbara, and I built, and now it is a featured house on the spring tour sponsored by the Builders Association of the Twin Cities (BATC).

So before we get to call it our own, the crowds move in and put on little paper shoes that make them look like operating room nurses in street clothes. This house is one of the “pay” houses on the tour. It costs the interested five bucks to come through the door. I intend to head to Vegas after the Parade is over.

Not really. Half the money is a donation to the BATC Foundation, which each year builds and remodels houses for returning veterans and other deserving people in our community. The other half of the donation goes to the Washburn Center for Children. We hope the money will help build a new center for the treatment of kids who suffer with social, behavioral and emotional disorders that make it tough for them to get through school and rob them of their childhoods.

So I’m good with opening up the doors of the house. “I can’t believe you’re letting everyone know where you live and letting them inside your home,” the woman said. I get that a lot. My standard answer is: “Why not. You let me inside your home for 32 years.” Fair is fair.

Parade of Homes veterans tell me this house is attracting a different breed of tourist. This crowd, I’m told, asks harder questions. I think that is because the house is not something you see every day. It is the only new home that will be rated at the top of three different energy efficiency organizations.

When we take possession, the house will be certified LEED Platinum, Minnesota GreenStar Gold and BATC Greenpath Master level. There are lots of gizmos, building techniques and materials the tourist doesn’t see every day, but will be commonplace in a few years.

“How long will it take to pay back the cost of that solar array on the roof?” I’m asked. I haven’t the slightest idea. All I know is that I won’t have much of a utility bill. That answer resonates with half the folks who come through. The other half says, “Boy, your carbon footprint must be tiny.” I can answer that. “Yes,” I say. “It will be tiny.”

“Where’s the batteries for the solar system? Can we go look at that?”

I tell them I don’t have any batteries. The house is tied into the grid. When solar isn’t producing enough electricity, I buy it just like everyone else. But since all my light bulbs are LED, I won’t be using as much electricity to start with.

Then I tell the cynical guy: “When I’m not here, the sun keeps making electricity and my meter runs backwards. The utility company has to pay me for the juice I’m putting back into the grid.”

Eyes widen. I’ve struck a chord. “Xcel pays you?” he asks, wobbling on his feet.

“Yup. I’m my own utility company.”

One person tries to catch me with my ethics down. “I see you put cedar shake shingles on your roof. Those come from sustainable forests?” he says. He’d been reading up.

He squints at the roof. “No, those are wood shakes. “Used to do some roofing myself,” he says.

I’m glad he thinks they look like wood. I tell him there is a company in Canada called Enviroshake that would be pleased with his observation. “No,” I say, “those shingles are made from old tractor tires and sawdust.” He says, “Get out of here.”

I do, to the kitchen where I overhear a woman say to the architect. “Well, I think Don Shelby has gone a little overboard on this green thing. People have got to have a dishwasher in the kitchen.” He smiles and points to what looks like a stack of drawers in the cabinet. The whole panel drops down, and there is a high efficiency, water saving dishwasher. “Isn’t that cute,” she says.

I exhale. I’m not as stupid as she thought I was. 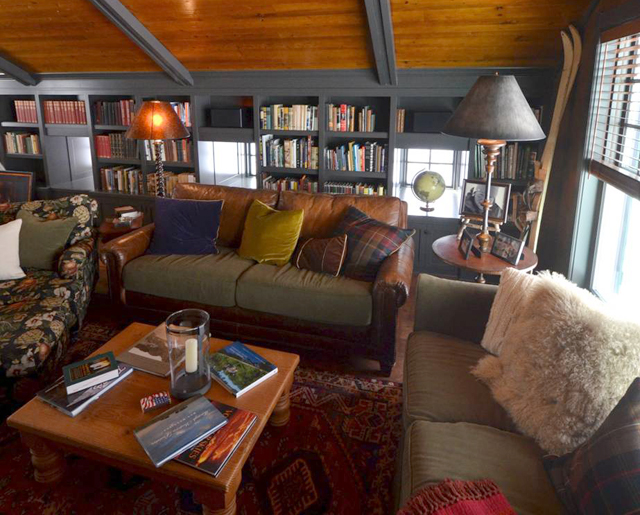 Joe Paetzel/The Landschute GroupOne tourist looks at the big tank in the mechanical room. He’s never seen anything like it. This is my cue to go on one of my favorite rants. I say: “You know, one of the stupidest things people do is pay taxes to have their water purified to the point that it makes Evian look like bilge water, and then put that fresh drinking water into their toilets to flush whatever. We think the cat is crazy for drinking from the toilet.  The cat knows fresh drinking water when it sees it.”

The guy says, “That’s fine, but what is that tank for?”

Calmer, now that I’ve gotten the cat off my chest, I say: “The tank holds all the water from the sinks, tubs, shower, dishwasher…all the gray water we have already used, and then its plumbed into the toilets for flushing. I’m not flushing my toilets with Evian.”

“Never thought of it that way,” he says.

That may be the whole point of the house —  just a new way of thinking.”

It must be working. The tourists have to go through the garage to get out to their cars. We put out brochures and little demonstrations on tables. People spend a lot of time looking, and thinking. They take the brochures with them. I hear them say, “Maybe we ought to try some tractor tire shingles next time.  He says the roof is guaranteed for 50 years. Imagine. Made with stuff we throw away.”

A new way of thinking.

“No, sir,” the architect says. “This is not Paul Magers’ house. It is Don Shelby’s house.”

The man looks crestfallen. He moves toward the door. I think he wants his donation back. I understand. I miss him, too.