Oil that sinks is hard to clean up.

That was the big lesson after energy giant Enbridge’s pipeline burst, causing oil to flow into Michigan’s Kalamazoo River in 2010, some 75 miles from where it empties into Lake Michigan. After more than three years and a billion dollars, oil remains in the river.

So a refinery’s proposal to ship heavy crude oil from Superior, Wis., across the Great Lakes has emergency responders gearing up to bolster gaps in current oil-spill response plans. And the gaps are substantial, according to a June 2013 report from the U.S. Coast Guard’s research and development division.

“There is work to be done on that front,” said Jerry Popiel of the U.S. Coast Guard, who co-chairs the team along with the U.S. Environmental Protection Agency.

Preparations for heavy oil shipping will be one of the main topics at the team’s next meeting, in April, Popiel said.

Among the presenters may be the Alliance for the Great Lakes, a Chicago-based nonprofit that published an October 2013 report faulting the region’s preparedness to ship oil from the Alberta tar sands.

Alliance president and CEO Joel Brammeier said his group is not advocating a ban on tar sands shipping, given the oil’s inevitable push eastward. 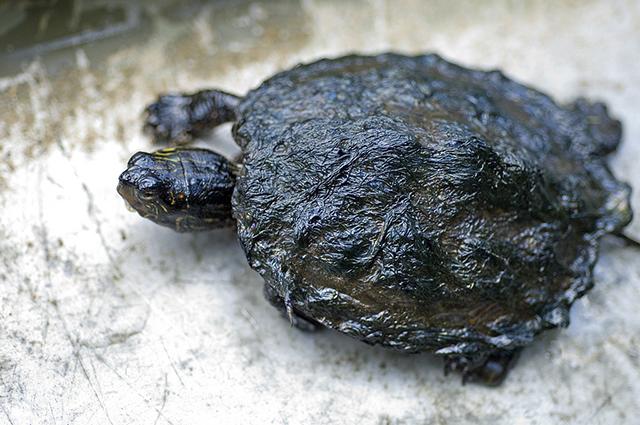 “There is no question that the spill response regimen generally has holes in it,” he said. “The presence of a new product that is very difficult to clean up adds fuel to the fire to address those deficiencies.”

In a report published last week, the Council on Canadians, an environmental advocacy nonprofit, went further than the Alliance in calling for a ban on Great Lakes shipping of what it called “extreme energy” products, including tar sands oil, nuclear waste, and oil and wastewater from fracking.

“Allowing the transport of chemical-laden toxic energy sources near or on the Great Lakes and St. Lawrence Seaway is an act of sheer folly,” the group’s national chairwoman, Maude Barlow, wrote.

Calumet Specialty Products Partners L.P., which owns a refinery in Superior, is exploring options for barge shipments of oil across the Great Lakes. The oil could come from the booming Bakken shale of North Dakota, or from the tar sands fields of Alberta, Canada.

As domestic crude oil booms, “so too will the need to identify the safest, most reliable methods by which to transport crude oil to our nation’s refining centers,” Calumet spokesman Noel Ryan wrote in an email. “We believe the transportation of crude oil by barge is one such method worthy of serious consideration.”

Petroleum is among the top products shipped on the Great Lakes, though little of it has been crude oil. In 2011, more than 3.9 million tons of petroleum products, much of it fuel oil and gasoline, were shipped.

Tar sands crude is different. It is mixed with clay, sand and other hydrocarbons and is “extremely difficult, potentially even impossible, to completely remove from the water after a spill,” the Alliance report said.

Tom Crane, deputy director of the Great Lakes Commission, a coalition of eight states and two Canadian provinces, sees the advent of heavy oil as a new concern on top of already known deficiencies in spill response plans, including preparation for oil spills in icy conditions.

There are signs of a lack of readiness for freshwater spills.

The Coast Guard’s National Response Center website, which keeps data on oil spills, was down last week, providing only a spill hotline number and an email address for open records requests.

The Freshwater Spills Information Clearinghouse, a public-private partnership intended to inform the public, bore the notice “Pardon our dust” — dated 2009. Funding dried up several years ago.

A 2012 conference on freshwater spills hosted by the U.S. Environmental Protection Agency was canceled, after last convening in 2009.

“One of the biggest challenges is for all levels of government to support these programs financially, which they’re not doing,” he said.

In Canada, the Globe and Mail in 2012 reported “dramatic funding cuts and consolidation of its oil-response programs, which would place a larger burden on the U.S. government, states and private industry to respond to spills.”

Despite a need for improvements, response team co-chairman Popiel said much of the plan is already in place — the teams laid out, the protocols set — and that “wouldn’t change whether it floats or sinks.”

The EPA declined to provide anyone to interview, and wrote in response to written questions that “for inland spills involving heavy oil on a large scale, and in complex weather and topography like the Great Lakes, EPA has effective response strategies and tactics,” and provided the Kalamazoo River spill as an example. 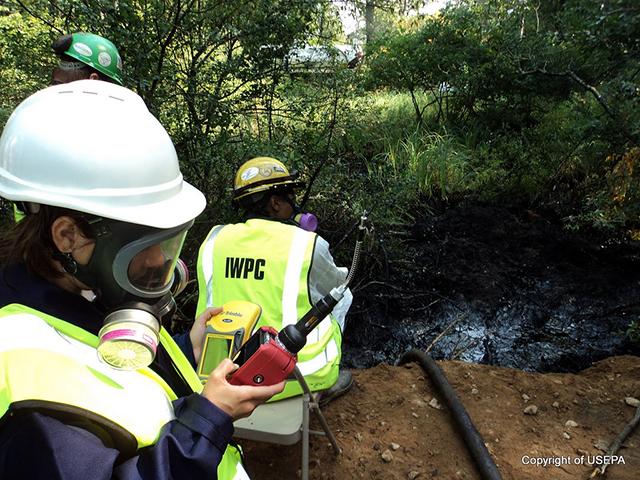 U.S. Environmental Protection Agency
Respirator-clad oil spill responders monitor air within 100 yards of where an Enbridge pipeline burst on July 25, 2010. Cleanup is scheduled to continue into 2014 and has cost more than $1 billion.

Asked what lessons that event provided for Great Lakes spill response, the agency said, “It is impossible to speculate.”

Responders have some time to prepare, though details of Indianapolis-based Calumet’s plan are unknown.

The company said it is “currently evaluating a number of potential options” for shipping crude oil from northern production fields eastward to refineries.

Calumet, or whoever the shipper is, would have to demonstrate its readiness for a spill to the Coast Guard. The agency inspects vessels and approves their response plans, and would also evaluate spill prevention and response plans for any shoreline tanks or harbor activities.

In December, the Wisconsin Department of Natural Resources dismissed an application from Calumet’s dock operator, Elkhorn Industries, to improve the dock in Superior because of unresolved questions, including who owned the property, but the company is free to reapply.

Elkhorn is owned by Jeff Foster, of Superior-based Jeff Foster Trucking. Calls to the company were not returned.

Calumet’s Ryan said the company was working with DNR to ensure the $20 million project would comply with regulatory and environmental rules. The DNR has begun preparing an environmental assessment, a review of environmental, economic and other impacts that could take several months to prepare after the company submits everything.

He wrote that the company was committed to safe shipping.

“Notably, petroleum products have been shipped on the Great Lakes for many years; nevertheless, we understand and fully appreciate the importance of building and maintaining a loading dock that would help safely facilitate the shipment of crude oil over Lake Superior,” he said.

At least 50 people showed up to a November public meeting DNR held for the dock repair project, according to DNR northern region director John Gozdzialski. The most common comments were objections to shipping crude oil over Lake Superior, and concern about spills, he said.

Petroleum spills decreased in frequency and volume over the past two decades on the Great Lakes, according to Coast Guard data used by the commission and the Alliance.

From 2003 to 2012, there were 220 petroleum-related spills from commercial vessels in the Great Lakes area, including connecting waterways. 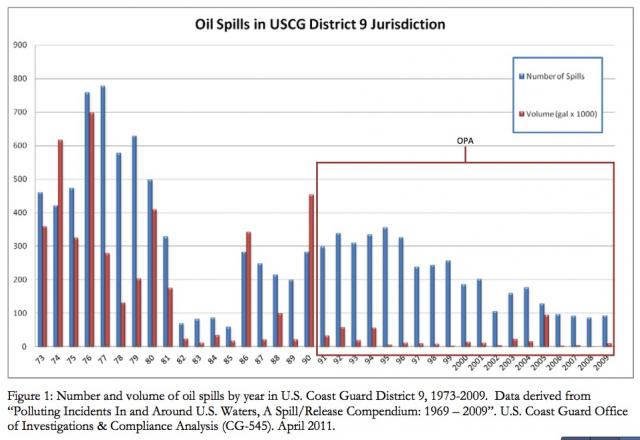 Great Lakes Commission Emergency Preparedness Task Force report, 2012
On the whole, oil spills have decreased in frequency and volume since the passage of the federal Oil Pollution Act, according to data from the U.S. Coast Guard District 9, which covers the Great Lakes. This data set stops with 2009, thus excluding the 2010 Enbridge pipeline break in Marshall, Mich. — the largest inland oil spill in U.S. history.

Most spills were small; the 50 spills that happened from 2008 to 2012 averaged about 10 gallons. The average for the previous five years was about 466 gallons, if one major spill is excluded.

In that 2005 exception, 84,000 gallons of oil was released into the Chicago Sanitary and Ship Canal when a tank barge exploded.

Whether by rail, truck, pipeline or tanker, crude oil is heading east from Canada’s tar sands and from the Bakken oil shale in the western United States.

Superior is a bottleneck, and “it increasingly makes more financial sense to ship tar sands crude by ship rather than by rail,” according to the Alliance report.

The boom has prompted the Great Lakes Commission to study its potential environmental impacts, according to commission spokeswoman Christine Manninen.

“There’s been a lot of concern among members of the Great Lakes Commission … about the increased movement of crude oil across the region,” she said. “A lot of the motivation was the big accidents that have happened, like the Lac-Mégantic (rail) accident in Quebec.”

“A lot of people don’t even realize what substances are being transported through their communities,” Manninen said.

Which mode is the safest is still unclear, said Andrew Slade, northeast Minnesota program coordinator for the Minnesota Environmental Partnership, a coalition of environmental groups.

Some say it may be shipping. Vessel transportation is “better understood and more heavily regulated,” Crane said, thanks to changes wrought after the 1989 Exxon Valdez spill [PDF] in Alaska.

But no transport mode is perfectly safe, and more shipping volume would obviously translate to more shipping risk, sources agreed.

“Whether it comes by rail or by pipeline or by vessel, now is the time to weigh in on the pros and cons of those,” the Alliance’s Brammeier said, “or the market will make that choice for us.”

This story is part of Water Watch Wisconsin, a project examining water quantity and quality issues across the state. The nonprofit Wisconsin Center for Investigative Journalism collaborates with Wisconsin Public Radio, Wisconsin Public Television, other news media and the UW-Madison School of Journalism and Mass Communication.

Technology for cleaning up sunken oil is inadequate, and that may be because few submerged oil spills have caused prominent damage, said the authors of a U.S. Coast Guard research and development report from June 2013.

But the potential for harm is severe. Heavy oils can destroy shellfish and other aquatic life, clog up water intakes at industrial facilities or power plants, and appear without notice on shorelines and in sensitive areas.

In 2011, the Coast Guard tested, off New Jersey’s shoreline, three prototypes for finding, mapping and recovering submerged oil, from three companies that each spent a year on the problem. The idea was to replace the traditional method of divers using suction hoses to pump oil to the surface.

Safety, endurance or visibility issues may plague the efforts. And water and sediment tends to come up along with the oil.

One of the prototypes was a remotely operated vehicle called the Sea Horse — for Seagoing Adaptable Heavy Oil Recovery System, developed by Alion Science and Technology Corp.

Marine Pollution Control developed a manned submersible that could go deeper and stay down longer than a diver, but was too expensive to test.

And the Oil Stop Bottom Oil Recovery System Group designed the Ninja Mini-Dredge, which weighed 3,000 pounds and could hurt the subsurface floor, but could handle harsh wind and waves.

“Of all the strategies in traditional oil spill response that increase success, the timing of getting the appropriate equipment on scene will be a major challenge in maximizing response efficiency and effectiveness,” the report said.