Call it a whitewater elephant.

The Mississippi River lock at Upper St. Anthony Falls in downtown Minneapolis will close — permanently, as far as anyone knows — after this shipping season.

The closure, by act of Congress, is meant to stop an anticipated invasion by several non-native oversized carp species known for ravaging ecosystems with their voracious appetites — and airborne acrobatics that smack anglers upside the head and turn tourism economies topsy-turvy.

Closing the Upper St. Anthony Falls lock means the carp can’t use it as an elevator to migrate into lakes and rivers upstream of Minneapolis.

But it also blocks barge traffic, tour companies — and downtown canoeists and kayakers who would like to avoid portaging. What of the prospective whitewater canoe and kayaking course proposed for St. Anthony Falls’ East Bank? And how will the closure reduce use of nearby locks and affect other major rivers?

Get ready to portage downtown

Recreational users, including the Minneapolis Park Board’s contract charter tour company, have already restricted or halted use of the Minneapolis locks to help stop invasive carp. With the Upper St. Anthony Falls locked closed, Minneapolis river traffic by the two remaining commercial companies that operate barges above the falls will drop to zero.

Canoeists and kayakers who used to use the locks on continuous paddle excursions can look forward to portage routes around any closed locks, said Minneapolis Park and Recreation Board president Liz Wielinski.

Wielinski said the MPRB would work with the National Park Service to find the best locations for putting in and taking out.

One planned recreational development — a proposed whitewater rafting and kayaking course along the east bank at St. Anthony Falls — won’t be affected by the Upper St. Anthony Falls lock closure, said George Dunn, a St. Paul attorney who has worked on the idea for decades. The course would go in below the upper falls, he said, so it wouldn’t provide carp an end run.

Closure of a lock still in commercial use is unprecedented on the Mississippi River, according to U.S. Army Corps of Engineers spokesperson Patrick Moes. The Corps had not planned for closing the lock before Congressional action, he noted.

Once Obama signs the bill, the Corps’ leadership will direct local officials on how to proceed.

(The bill does allow the Corps to operate the Upper St. Anthony Falls lock in emergencies, such as opening the lock to provide relief during a flood.)

A likely option is for the Corps to reduce the level of service it provides at the other two locks, with shorter hours of operation or even by-appointment-only status.

There have been critics of the lock closure. Greg Genz, president of the Upper Mississippi Waterway Association, a commercial river users’ group, called the “elimination of commercial waterborne activity” an effort to advance “residential development and expansion of [the Minneapolis] Park Board’s empire.”

However, “not that many people here actually opposed it,” said Friends of the Mississippi River program director Irene Jones.

People at the “governor’s carp summit” meetings that began in 2011 thought it would take years for Congress to close the lock; it took fewer than 36 months. “It required a huge amount of work and politics,” said Whitney Clark, Friends of the Mississippi River’s executive director.

Getting a standalone lock-closure bill through Congress seemed daunting until U.S. Sen. Amy Klobuchar added it to the huge Water Resources Reform and Development Act of 2014. 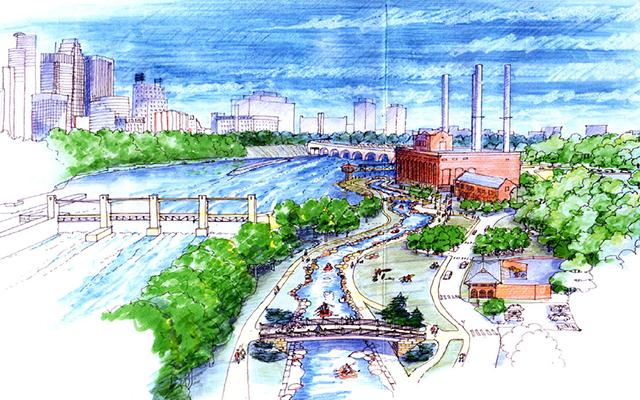 With state and metro representatives behind the bill, “there wasn’t enough of a voice for any of the Minnesota opponents to go anywhere,” Jones said.

The bill states: “Not later than 1 year after the date of enactment of this Act, the Secretary shall close the Upper St. Anthony Falls Lock and Dam.”

Closing the lock is one thing, but closing the dam would be quite another. One advocate says the word “dam” was included by mistake; if the Corps acts on it, downtown Minneapolis could be a cold Venice.

Dream of a port

St. Anthony Falls is why there is a Minneapolis. The only true waterfall on the Mississippi provided power first for sawmills and then for flour mills that made the city famous. But as it receded from St. Paul to Minneapolis over thousands of years, the falls created a scenic but narrow gorge littered with huge limestone boulders that impeded travel.

As early as the 1850s, locals strove to make Minneapolis supplant St. Paul as the head of navigation on the Mississippi River, offering operators of the steamboat Lamartine $200 to prove the stretch of river between the cities navigable.

But Minneapolis’ port below St. Anthony Falls, at Bohemian Flats near the Washington Avenue Bridge, was never satisfactory. “You can’t get railroad trains there. You couldn’t have a real port there,” said the National Park Service’s John Anfinson, who used to work for the Corps as a historian and cultural-resources manager. “They really wanted to get above St. Anthony Falls.”

In 1937, U.S. Sen. Henrik Shipstead succeeded in tacking the upper and lower St. Anthony Falls locks and dams onto the system of Mississippi River locks and dams Congress had already authorized. (That’s why the next lock and dam downstream, built alongside the site of the former St. Paul Ford plant in 1917, is known as Lock and Dam No. 1.)

But the Upper Harbor Terminal never became the economic powerhouse pioneers had dreamed of.

“It’s an example of when the competition between Minneapolis and St. Paul resulted in something that maybe wasn’t worth it,” said Peter Wagenius, policy aide to Mayors R.T. Rybak and now Betsy Hodges, whose administration will close the city’s money-losing port in north Minneapolis this year.

Does Wagenius see a future in which the Upper St. Anthony Falls lock is open again?

After years in which closing the Minneapolis lock was Job One, carp-fighters are turning their attention to other parts of the state.

Christine Goepfert, who leads the StopCarp.org coalition said, “Closing the lock allows us to put all of our effort downstream.”

Natural resource agencies and the coalition will now focus on the Minnesota and St. Croix rivers as well, Clark said.

Peter Sorensen’s research at the University of Minnesota into stopping carp with sound and water velocity is among the promising directions that could be tried at major Minnesota rivers.

Native fish are “oblivious” to loud sounds like boat motors that invasive carp are highly sensitive to, he said. The invaders also have trouble swimming against strong currents. A combination of those at other locks might provide partial protection, he said, and several such sites in series might succeed in slowing the carp’s upstream migration.

“Once they’re here, the options are like — there are none,” Sorensen said.