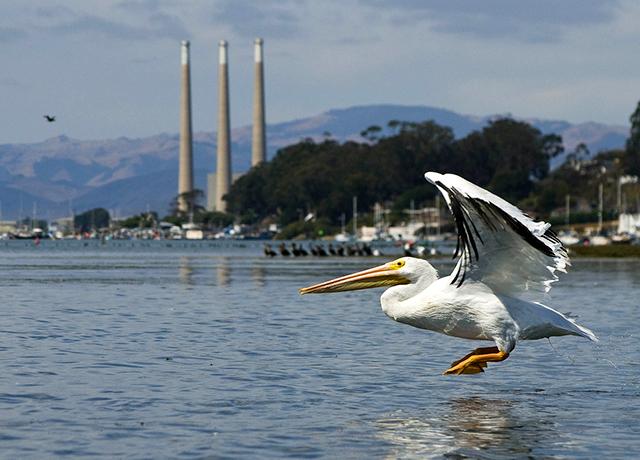 Creative Commons/Chuck Abbe
About 22,000 nesting pairs of white pelicans — about 20 percent of the birds’ total population — nest on 16 sites in Minnesota, according to the DNR.

NEW ORLEANS — The once-scarce American white pelican, a large soaring bird that found its way to recovery by nesting on the big lakes of Minnesota, is in the middle of the multibillion-dollar fight stemming from the 2010 Deepwater Horizon oil spill in the Gulf of Mexico – a fight that could yield money for additional bird-recovery efforts in the state.

Ongoing research in Minnesota testing the giant birds’ eggs and beaks has found evidence of British Petroleum oil from the blowout — the worst spill in U.S. history — as well as the controversial dispersant that BP used in control efforts. The dispersant, Corexit, is owned by a subsidiary of Minnesota-based Ecolab.

The research is important because Minnesota may qualify to receive a portion of the BP fines and penalties, which it can use for migratory-bird recovery projects. Results from the Minnesota research will be included in the federal case against BP.

“We were on the bleeding edge of this,” said Lori Naumann, a scientist with the Minnesota Department of Natural Resources.

The dollar amounts involved are huge. The company has already agreed to $4 billion in criminal fines and $28 billion in injury claims. On Sept. 4, a federal judge in New Orleans found BP guilty of willful misconduct and gross negligence, potentially exposing the oil giant to billions of dollars in civil penalties from the spill and its aftermath. The disaster, which killed 11 rig workers, took 87 days to cap and leaked nearly 5 million barrels of oil into the gulf, according to the U.S. Department of Justice. BP said it will appeal.

Pelicans leave this month for the Gulf

The court’s ruling comes during the month when the white pelican, a cousin of the ocean-going brown pelican, will leave Minnesota for its wintering grounds in the Gulf States and Mexico.

“Here’s where we see the effects [of the spill] way far away,” Naumann said.

About 22,000 nesting pairs of white pelicans — about 20 percent of the birds’ total population — nest on 16 sites in Minnesota, according to the DNR. That includes the largest single colony in the country at Marsh Lake in Big Stone and Lac Qui Parle counties.

The pelicans, which can live to be 15 years or older in the wild, did not nest in Minnesota from 1878 to 1968 but have been on the mend since. The birds were listed as a species of “special concern” by the DNR in 1984.

The American white pelican is one of North America’s largest birds, according to the Audubon Society. At 16 pounds, with a 9-foot wingspan, the birds ride thermals, fly in V formations, fish in groups and generally eat small rough fish from near the surface of lakes. There have been complaints about crop destruction and sport-fishing disruption caused by the pelicans, and a southern Minnesota farmer was fined $12,000 in 2012 for destroying thousands of chicks and eggs after he complained about damage to his corn.

Preliminary results of studies of eggs and bill knobs conducted with the help of scientists from North Dakota State University discovered pollutants from the oil spill in the birds’ eggs, including BP oil and Corexit. (A bill knob is also known by the delightful name “nuptial tubercles” — a large ridge on top of an adult’s bill that falls off after mating and chick feeding.)

Young pelicans stay in the Gulf for a year before returning north, which gave them time to be exposed to oil and dispersant. The dispersant found in eggs in a 2011 survey of Minnesota nests “wouldn’t have come from anywhere else but the oil spill,” said Carrol Henderson, head of non-game wildlife for the DNR.

BP spokesman Geoff Morrell said on Sept. 3 that underreported studies indicate a recovering ecosystem in the Gulf and run contrary to a doomsday narrative that appeared after the spill. And BP press officer Jason Ryan gave MinnPost this statement:

Constituents present in oil and compounds used in dispersants are commonly found in the environment in Minnesota, the Gulf of Mexico and elsewhere from a vast array of sources not related to the Deepwater Horizon accident. The researchers have cautioned that the results are too preliminary to draw conclusions and that there is a lack of data from before the spill from which to make comparisons. They also did not indicate there was any evidence of lower hatching rates, survival of chicks or other potential effects. We are not seen a published paper from these researchers.

But much research is tied up in court, and the Minnesota science indicates that there are problems, said Melanie Driscoll of the National Audubon Society’s Louisiana office.

“Beyond the basic initial finding that contaminants were detected in the eggs, blood, and bill knobs of these birds, further research results are likely embargoed in the legal NRDA [National Resource Damage Assessment] process,” she said. “That means they will not be available to the public until the federal government settles the court case for environmental damage against BP. That could be years, or even decades.”

Dispersant used in Gulf after spill

Corexit was thrust into the news when BP used it off-label as it attempted to plug the leaking well on the floor of the Gulf. Nearly 2 million gallons of Corexit was poured into the Gulf, and the material is toxic to marine life. Some scientists say it has a synergistic affect when mixed with oil, increasing its toxicity, and it may bioaccumulate. Much is unknown because few tests have been done on its toxicity; more have been conducted on its effectiveness as a dispersant. Its use is banned in the United Kingdom.

A key question is whether the pelicans’ unhatched eggs failed to hatch because of the oil, the dispersant, some combination of the two or something else entirely.