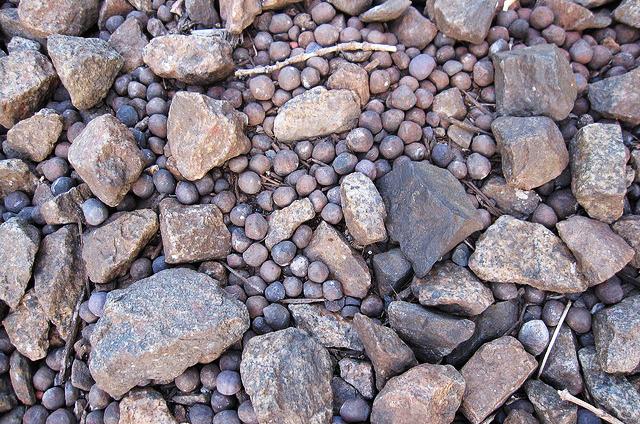 CC/Flickr/Ed Kohler
Scientists wanted to find out whether the rock from which taconite is derived might be causing mesothelioma.

University of Minnesota researchers still don’t know whether it’s fibers from commercial asbestos or fine particles in taconite rock that are causing taconite workers to die from mesothelioma, a rare cancer of the lining of the lung, at nearly three times the expected rate.

But now they have learned that heart disease, a much more common ailment, afflicts mine workers at nearly the same high rate.

Those are two of the findings in a six-year, $4.9 million study conducted by the UM’s School of Public Health, with the Natural Resources Research Institute in Duluth and other partners.

High rates of deadly mesothelioma were first noted in 1997, in a Minnesota Department of Health report [PDF] on cancer incidence in northeastern Minnesota.

Deaths from the very rare disease were not recorded separately from other lung cancers until the late 1990s, so earlier mesothelioma deaths may not have been identified correctly. At least 80 Minnesota taconite workers died of mesothelioma through 2010, the most recent year for which data are available. The disease has long been associated with asbestos, a fireproof material that was widely used in industrial settings until the 1970s. But crushed taconite rock produces dust very similar to asbestos fibers, so scientists wanted to find out whether the rock itself might be causing the disease.

In exhaustive measurements of air quality in taconite plants across the Range, researchers found a frustrating mix of long fibers similar to asbestos, and shorter particles more likely from the taconite rock, and they were unable to sort out which was correlated to mesothelioma. Asbestos has largely been removed from the plants, and there aren’t detailed air quality records from the period in which it was commonly used.

“Unless you have a way of accounting for the actual asbestiform exposure, it’s hard to say where these mesothelioma cases originate,” said lead researcher Dr. Jeffrey Mandel.

Researchers are also frustrated by a contradiction in geography. They found more cases of mesothelioma in western parts of the Range, but higher measurements of dust in the eastern-most plant, the Northshore mine. “It makes us suspicious there are other factors that we haven’t been able to control for in our analysis,” Mandel said. “It could be people in the west had more commercial asbestos exposure.”

Another geographic blip is that at the Northshore processing plant on the eastern end of the Iron Range, higher exposures to mineral particles occur in the ore crushing operations, while in the west, it’s the pelletizing operators who experience more dust. The researchers can’t explain the difference, and the number of mesothelioma victims is too low to assign relative risks to different job categories.

Across the Iron Range, air quality in taconite plants has improved in recent years, and the researchers said it’s generally safe. But spikes of silica dust occasionally exceed federal workplace safety standards. (Taconite rock is mostly silica.) As part of the university research, nearly 1,200 workers and 500 spouses participated in a lung health screening. Their X-rays revealed a higher-than-expected rate of scarring of the lungs, which can be caused by exposure to silica or other dust, infections, or a dozen other conditions.

“It’s higher than it should be, so we know there’s something going on, but we can’t get our arms around it as being one type of exposure or another,” said Mandel.  The abnormalities are not a precursor of cancer, he said.

Probably the most surprising discovery is a higher-than-expected rate of heart disease.

“It’s probably about 30 percent elevated compared to the rest of the state,” said Mandel. “So this makes us wonder — is this a risk factor, is it related to smoking, high blood pressure, cholesterol, or some combination of risk factors that includes these very small particulates?  We don’t have the answer.” He said taconite workers should take steps to reduce other risk factors such as smoking.

And they should wear personal protective devices such as masks when working.  Researcher Gurumurthy Ramachandran said interviews with workers and supervisors indicated they’re aware of the importance of using such devices, but they’re not necessarily wearing them when they should. “The masks are cumbersome; they’re uncomfortable to wear,” Ramachandran said.  “There are good reasons why people would not want to do it, but it’s important.”

Federal workplace safety standards require mine processing plants to measure mineral particles that are 5 microns in length or longer.  But researchers found higher quantities of much smaller particles, from 1 to 3 microns.  This means the plants may be meeting federal standards while exposing workers to high levels of very fine particles, and no one knows which size of dust causes disease.

A related study by the Natural Resources Research Institute sampled air in five Iron Range communities and three control sites.  Results released in April 2013 indicated that “particulate concentrations in all the communities sampled are below the National Ambient Air Quality Standards set by the U.S. EPA, in fact, lower than what was found in Minneapolis.”

The long latency period for mesothelioma (it typically appears 20-50 years after exposure) means the disease will continue to attack workers long after asbestos was mostly removed from buildings and industrial equipment beginning in the 1970s.

If researchers don’t find a way to determine which mineral particles are causing mesothelioma on the Iron Range, we won’t learn until several decades have passed whether taconite dust can cause this always-fatal disease.

More information may come soon from a separate study just winding up at the federal Environmental Protection Agency research lab in Duluth.  There, for many years, toxicologist Phillip Cook worked to define the potency, the cancer-causing strength, of various mineral particles. His research, now being completed by colleagues since his death last fall, indicates most of the types of rock found in northeastern Minnesota are not as potent as commercial asbestos.