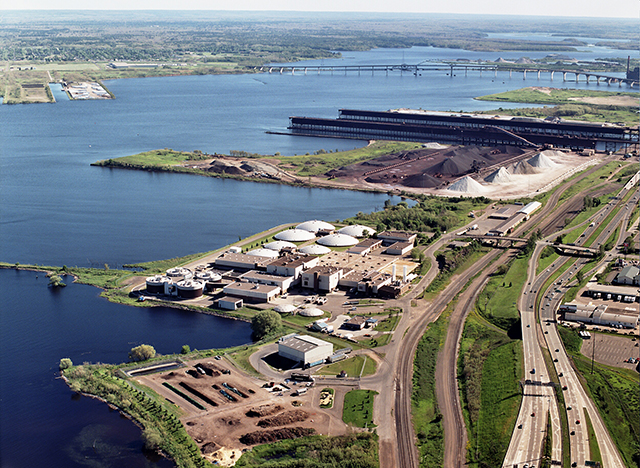 DULUTH — One of the most sensitive items on the Minnesota Pollution Control Agency’s agenda in the next couple of months is a permit for a major wastewater treatment plant on Lake Superior.

Environmental groups and a Chippewa band are criticizing the agency’s plan to allow the Western Lake Superior Sanitary District (WLSSD) to continue discharging mercury and sulfate — indeed to discharge more mercury — into the cleanest of the Great Lakes.

“We’re looking at ways to permit pollution rather than putting pollution under control,” said Paula Maccabee, attorney for WaterLegacy. Environmentalists say their anger is mostly directed at the state, but the controversy presents an unusual and uncomfortable public-relations problem for WLSSD.

MPCA officials say the permit will control pollution while WLSSD continues to ratchet down the discharge levels.

Until recently, WLSSD has been the little engine that could, working hard for the last 30 years to bring clean water and healthy fish to the people living in and around Duluth. The utility, created by the Legislature in 1971, serves eight cities and surrounding rural townships in a 500-square-mile region at the western tip of Lake Superior; it is by far the largest wastewater treatment plant discharging to the U.S. side of the lake. Beginning in 1978, the new plant rescued the St. Louis River from the grossest of industrial pollution. Later, staffers came up with creative ways to keep mercury out of the system, including a pioneering program to help dentists install separators to capture and recycle the mercury from fillings.

Discharge permit up for renewal

But now, after years of reducing the mercury in its effluent, WLSSD faces tightening limits on mercury that are aimed at protecting Lake Superior’s relatively clean waters. Its discharge permit, addressing mercury and other pollutants, is up for renewal. The state plans to issue a permit that will allow the utility to discharge more mercury than it has been discharging, while it works on ways to remove the pollutant from its effluent.

Retired chemistry teacher and environmental activist Len Anderson hates that idea. He credits WLSSD for its historic cleanup of the St. Louis Bay, but he still worries about people who eat fish from the water.

“The estuary is an absolute cesspool in that respect only,” Anderson said in an interview. He was referring to high concentrations of mercury in fish from the bay. “The water looks good, it produces an abundance of wildlife, but just don’t eat those fish — and we know for a fact that people do.”

Mercury in water can work its way up the food chain; it’s a powerful neurotoxin, and fish in Lake Superior carry high amounts, prompting warnings for pregnant women and young children. The Minnesota Department of Health reported in 2011 that 10 percent of newborns on the Minnesota side of Lake Superior had mercury levels above the U.S. EPA safe level for methylmercury (the organic form of mercury found in fish).  All the states and Canadian provinces around the Great Lakes have similar warnings not to eat too much fish because of mercury contamination.

Most of that mercury comes from burning coal at electric power plants. Federal and state programs are aimed at reducing those emissions. But mercury can also enter the lakes from industrial sources and medical waste. Some of that mercury finds its way into wastewater treatment plants like WLSSD.

WLSSD has been working to squeeze as much mercury as possible out of its system: The District says it removes 97 percent of incoming mercury, nearly as much as the best-performing plants in the country, which get 98 percent. The plant recently installed new equipment to improve its capture rate. And in 2011 it reduced the amount of mercury it allows in incoming industrial wastewater. WLSSD says there is currently no technology that can remove the tiny amounts remaining.

Recent monitoring shows WLSSD is close to meeting the strict standard designed to protect Lake Superior. (It has more challenging limits for mercury than similar plants elsewhere in the state — 1.3 parts per trillion compared to 6.9 parts per trillion — because it discharges to Lake Superior.) But it asked for a permit to discharge more, saying it has not been able to find a way to capture the dissolved mercury in its effluent. A membrane filter would cost more than $100 million, and there is no proof it would work, WLSSD said. The MPCA is responding with a draft permit that allows higher levels for five years while the plant looks for ways to ratchet down. The permit directs WLSSD to test various filtration systems, evaluate new treatment technologies, and update its mercury pollution minimization plan, including figuring out where the mercury comes from.

Environmental groups acknowledge that the utility faces an uphill battle with mercury, but they question why the MPCA would allow the plant to backslide from its current performance.  The Fond du Lac Band of Lake Superior Chippewa’s water projects coordinator, Nancy Schuldt, said in an email, “I think there is more the MPCA and WLSSD can be doing … and permitting is the appropriate place and time to ratchet down pollutants.”

The MPCA said it set the interim limits higher to allow for fluctuations in plant operation, “so the facility can achieve compliance on a longer term average,” MPCA staffers said in a written response to questions. WLSSD’s executive director, Marianne Bohren, declined to answer questions for this story.

Len Anderson and other environmental activists argue against the looser limit on mercury, but they’re just as upset about another challenging pollutant, sulfate. Neither WLSSD’s current permit nor the new draft permit has a limit on sulfate, despite the fact that wild rice grows in the St. Louis River estuary, where the plant discharges its waste. Sulfate damages wild rice, and WLSSD’s sulfate has been as high as 28 times the legal limit for wild rice waters. But the MPCA only plans to require the facility to monitor the sulfate in its effluent during the term of the five-year permit. The state’s sulfate limit for wild rice waters has been on the books since 1974, but has only been enforced once in all those years. Under pressure from environmental groups and tribes, the MPCA recently began requiring dischargers to monitor their sulfate levels, in a step toward imposing limits.

The 12,000-acre estuary of the St. Louis River, where it flows into Lake Superior, has always been an important home for fish, including walleye and sturgeon, and for breeding and migratory birds. For years it was polluted by industrial plants along the river. But thanks to plant closings, environmental regulations, and WLSSD’s wastewater treatment, the ecosystem has largely regained its health.

However, wild rice has not made a comeback. In rivers and lakes where it grows well, the Minnesota state grain is a key resource for a whole community of wildlife: ducks and geese nest and eat in the rice beds; fish and frogs live among the plants, providing food for loons and great blue herons; eagles patrol the skies, dining on larger fish. But this once-rich habitat is degraded in most of the estuary. Contaminants, dredging, sedimentation, and disturbances caused by boats contribute to the problem. High levels of sulfate in the water don’t help. Lifelong ricer Len Anderson points to one place where wild rice is vibrantly healthy, Pokegama Bay, upstream from WLSSD and fed by a Wisconsin stream that – unlike the Minnesota tributaries — doesn’t carry heavy loads of sulfate from taconite mines.  The Minnesota DNR and tribal groups are planning an ambitious effort to restore the estuary’s once-abundant stands of wild rice.  But it’s hard to see how they can succeed if the river continues to carry a heavy burden of sulfate.

Environmental activists are frustrated, disgusted even, with what they see as the state’s foot-dragging on enforcing sulfate limits. Maccabee said both WLSSD and the MPCA have known for years the plant’s sulfate levels are high. “They looked the other way,” Maccabee said in an interview. “I expect regulators to put the pieces together, to look at the situation and say, ‘WLSSD has high sulfate, let’s find out where that comes from.’ ”

The Fond du Lac Band of Lake Superior Chippewa’s argument is similar, but couched in more diplomatic terms. “WLSSD has existing effluent sulfate data, showing sulfate concentrations” likely to harm wild rice, and the presence of wild rice in the river is well documented, the band said in its comments to the state on the draft permit. In short, there’s no reason the state can’t act more quickly to impose a sulfate limit, the band’s comments suggest.

“The only known wild rice production area is upstream of WLSSD’s discharge; not downstream,” said Aaron Luckstein, supervisor of the MPCA’s Southeast Regional Unit, Wastewater Section. “When Lake Superior backs up into the estuary, it is unknown if or how the water in the estuary impacts the wild rice. Furthermore, we only have one sulfate measurement from WLSSD’s effluent. We need to know if and how sulfate varies in the effluent over time to help determine if limits are needed.”

MPCA staff is working on responses to public comments on the draft permit; the Citizens Board is likely to take up the matter in late March. The meeting could be lively, as activists are likely to share their concerns with board members, who must vote on the permit.