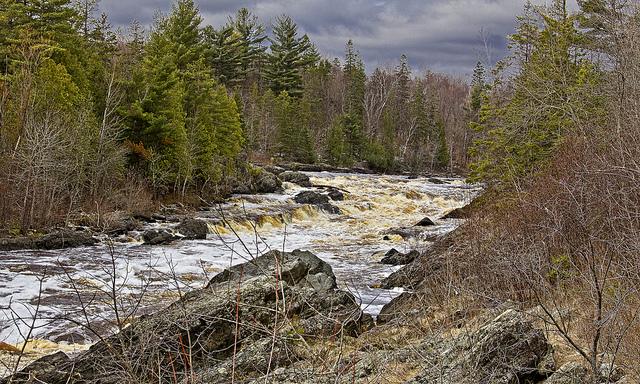 CC/Flickr/Randen Pederson
The St. Louis River is a beautiful place — and an integral part of a complex ecosystem.

The Fond du Lac Band of Lake Superior Chippewa places a dollar value on the benefits provided by the St. Louis River, which runs from the Iron Range through the Band’s reservation near Cloquet, and into Lake Superior.

The St. Louis River is a beautiful place. It’s an integral part of a complex ecosystem that provides habitat for wildlife, peat lands that store carbon, and wetlands that help prevent flooding. It offers places to fish and gather wild rice. But what’s all that worth? A new study puts the figure somewhere between $5 billion and $14 billion.

The study was commissioned by the Fond du Lac Band to help show that the “ecosystem services” provided by the St. Louis watershed are valuable — at least as valuable as projects that the Band worries might damage the river, such as PolyMet’s proposed NorthMet copper-nickel mine, planned for the headwaters of the St. Louis.

The Band’s water protection coordinator, Nancy Schuldt, said the Band has learned that to protect vulnerable natural systems it needs to be able to attach dollar values to them.

Filling in the ledger

“When you have on one side of the ledger a project proponent claiming it will add X number of jobs over X number of years, and X number of spinoff jobs, and on the other side you have nothing that represents the natural system’s value to the affected community – if you’ve got nothing, a big fat goose egg — it’s really easy to say it’s in the public interest to allow this project to move forward,” she said. “But if you have a big fat number that’s representative of what a healthy, functional ecosystem is providing the commons, then that decision moves closer to one that is more balanced in terms of what the public debate should be about.”

For example, forests and wetlands capture water, clean and store it – which limits flooding and reduces the need for expensive water treatment plants. Soils, especially peatlands, store carbon, which mitigates global warming. Even parks and trails can reduce health-care costs by providing the opportunity for outdoor exercise. And the river contributes social and cultural values such as regional identity, a sense of place, and appropriate settings in which to conduct sacred ceremonies.

The report is far from comprehensive, Schuldt said. “This is a very conservative underestimate of the ecosystem services provided by the watershed, because we haven’t filled in all the blanks.”

Schuldt emphasized that it’s not just Band members who benefit from the ecosystem.  “It’s everybody that lives, recreates, visit, spends time, benefits from resources in this particular place on the planet.”

The St. Louis River runs south from the eastern end of the Iron Range to Duluth/Superior, where it flows into Lake Superior, the largest U.S. tributary to the big lake.  The watershed is in the heart of the Arrowhead country, the land the Chippewa (Ojibwe) ceded to the United States by treaty in 1854.  The Indians reserved the right to hunt, fish, and gather food in the vast ceded territory, and following court rulings affirming that right, they have been increasingly assertive in exercising it, and increasingly vigilant in trying to protect the resources. In recent years tribal groups have participated in environmental reviews of big projects, conducted research on moose and other wildlife, and restored sturgeon and coaster brook trout to the waters.  They work with the state government, but especially with federal agencies, which have a trust responsibility to protect native interests.

The study was conducted by Earth Economics, a nonprofit based in Tacoma, Washington. The firm uses a method called “benefit transfer,” applying data from a library of peer-reviewed studies to provide an indirect estimate of the value of a new setting. Much faster and cheaper than conducting primary research in the new location, the benefit transfer method has its weaknesses.

The St. Louis River study is “pretty rough and ready,” according to Steve Polasky, a professor of Ecological/Environmental Economics at the University of Minnesota and a founder of the Natural Capital Project. Polasky said the Tacoma consultant could have used data from studies conducted in northeastern Minnesota rather than its usual resources, and the analysis probably would have been stronger. However, Polasky endorsed the idea of quantifying the value of the ecosystem.

Polasky recently returned from Washington, D.C., where he consulted on a guidance document to help federal agencies include ecosystem services analysis in decision-making. Polasky said the U.S. Forest Service has been working on the idea for several years, and the U.S. Army Corps of Engineers is also obligated to include the concept in its decisionmaking. Both agencies are key to the possible future of PolyMet’s proposed NorthMet mine and other projects in the St. Louis River watershed. The U.S. Forest Service must decide whether to complete a planned land swap for the mine, and the Corps would issue permits for its wetland impacts. The Band and environmental groups have pointed out that specific wetlands in the mine’s footprint are unusually rich in a diversity of plant and animal life.

Polasky said, “If that is true, a fair question for the Corps is, ‘Are you doing this on the basis of acre for acre, or are you actually thinking about what services are generated by those wetlands, and are they an equivalent set of services?’”

Expresses what’s been ‘missing from the conversation’

The Band recently hosted a workshop to introduce the report to other groups – agency representatives, nonprofit organizations, researchers – and Schuldt said their interest was high. “Citizens who are following environmental issues have been waiting a long time to see this kind of information, because it helps us express what we think has been missing from the conversation for so long.”

She is hoping to collaborate with others to expand the information – to cover the entire ceded territory or perhaps the Lake Superior basin – and to do more in-depth analysis.

“Our goal is to have this be kind of a living file that represents an inventory of where these various natural and cultural resources are in time and space, and then for any project that comes down the road — a pipeline or a mine or something else that is a major disruption to the tribe’s ability to exercise treaty rights — we at least can begin to quantify,” she said. “It isn’t enough to simply say how important wild rice is to us, or how important moose or clean water are, or the ability to go out into an undisturbed area and practice traditional ceremonies. It’s very difficult to translate that into a decision. We felt if we could be more quantifiable, they’ll have to take it more seriously: It’s harder to ignore.”