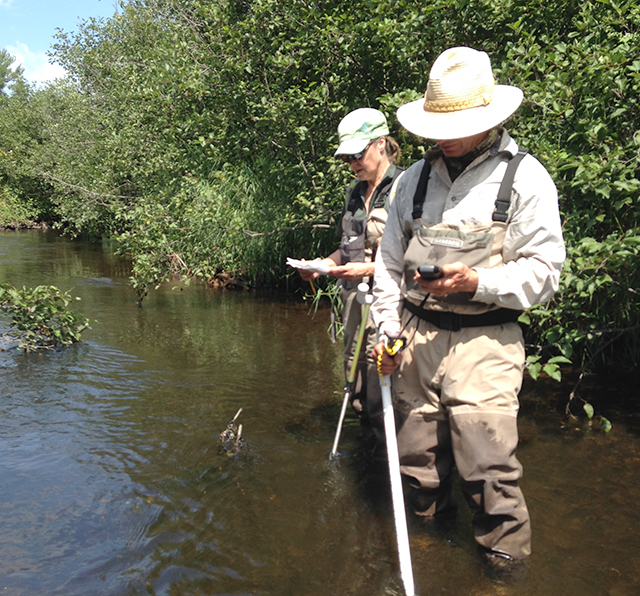 MinnPost photo by Stephanie Hemphill
Lorri, left, and Don Mitchell learn how to use a GPS unit and quick-reaction thermometer.

DULUTH — Don and Lorri Mitchell recently spent an entire Saturday slogging through muddy creekbeds, tromping across marshy wetlands, and swatting the occasional mosquito so that they could stick a thermometer into the water again and again.

They’re not scientists, but they volunteered to help with a research project, because they’re worried about brook trout. They love to wet a line in search of the reclusive fish.

“It’s exhilarating when you catch one, and you have a reverence for the fish,” says Don.

Brookies are dark with dramatic markings. Their backs are decorated with squiggly ripples and their sides are sprinkled with bright red dots surrounded by blue circles.

“Of course it’s mostly catch-and-release now,” Don says, “but I used to bring them to my grandfather, when he could no longer fish. He was overjoyed to still have a connection to angling.”

‘Sort of the canary in the coal mine’

I dug out an old pair of chest waders so I could follow Don and Lorri around because I wanted to know more about the project they’re working on. It’s a study by Lucinda Johnson, director of the Center for Water and the Environment at the Natural Resources Research Institute at the University of Minnesota Duluth. She’s trying to figure out which streams are likely to provide good habitat for trout as the climate warms.

“Brook trout are sort of the canary in the coal mine,” Johnson says.

A more scientific term is “sentinel species,” which means if trout are happy and healthy, it’s a good sign that the stream is healthy too. Brookies are finicky about their habitat. They require clean, cold, water, and a gravel bed riffled with oxygen-rich water in which to lay eggs.

People who understand trout – including Don and Lorri Mitchell — are worried that climate change will add a final blow to streams already degraded with too much silt and water that’s warmed by roofs, driveways and parking lots along the North Shore. Groups like Trout Unlimited, along with the Department of Natural Resources and county land managers, want to be sure that when they do work to protect or rehabilitate a stream, they’re investing their scarce resources in a place that has a good chance of providing homes for brookies into the future.

That means taking lots of water temperature readings, and that’s where the volunteers come in.

The day starts with a training session under clouds and drizzle at Duluth’s Lester River Park. The Mitchells and one other volunteer meet with Johnson and with John Lenczewski, executive director of the TU chapter.

Brook trout: happy in temps from mid-50s to mid-60s

Lenczewski explains that trout are happy in stream temperatures from the mid-50s to the mid-60s (Fahrenheit). Some of the bigger North Shore rivers reach the mid-70s in the summer.

“If it gets over 75 it will flat-out kill them,” Lenczewski says. “It stresses them around 70.”

Meanwhile, the ground, protected by trees, is typically 46-48 degrees, even in the summer. So snowmelt and rainwater percolating down through the soil can cool the stream. But the North Shore is not richly endowed with soils.

“We know groundwater is associated with particular types of glacial sediments,” says Johnson. “It shows up in areas where you have enough overburden, as opposed to bedrock outcrops which behave sort of like pavement,” where the rain runs straight off into the stream without being cooled by hours or days in the soil.

Johnson and Lenczewski take turns explaining the project and demonstrating how to operate the equipment — a GPS monitor and a quick-sensing thermometer mounted at the end of a PVC pipe. One of the volunteers can’t stay long enough to monitor a stream today, but she plans to come back when she has more time. So I’m sent with the Mitchells to a stretch of creek called Dutch Slough, a few miles north of Cloquet.

When we find a gravel parking spot near the creek, Don strides off through shoulder-high tansy and comes back with the sobering observation that it’s probably not going to be an easy slog. There’s a reason it’s called a slough (Merriam Webster: “a place of deep mud or mire.”) Don wants to check in with people living nearby – to let them know what we’re doing, and to see if they have any information to share about the condition of the creek.

Raymond Saeland’s neat home is perched on the edge of a steep hill leading to the water; he offers a sympathetic smile and the opinion that we’d better have a canoe if we want to get very far. He’s lived here since the 1970s; he says it used to be a fast-flowing creek, but beavers have slowed it down and silted it in. 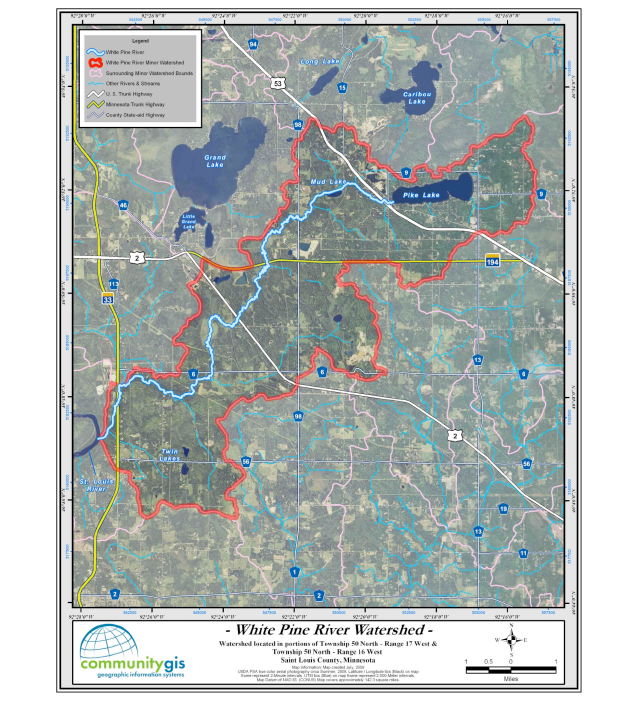 Don and Lorri Mitchell explored Dutch Slough (not named on map), which runs alongside Hwy 33 near Hwy 6. It flows into the White Pine River, a tributary of the St. Louis River (lower left). The St. Louis River is the largest U.S. tributary to Lake Superior.

Undaunted, we climb into chest waders (theirs are lightweight Gore-Tex; mine is a heavy neoprene set I’d bought for a previous story; it seems to double my weight as I haul it on). We make our way through the tansy and then trample chest-high grasses to get to the creek’s edge. By now, the sun is shining from a blue sky and it’s suddenly warmed up to 80 degrees. The cool water feels good, even through my thick waders. Downstream to the south, the creek flows quickly along a shallow gravel bed. We can see where it joins the White Pine River. Our instructions are to walk to this junction and then another 200 steps beyond it to take our first temperature reading. Don lowers the thermometer in the water and gets readings around 17 degrees Celsius – that’s about 63 degrees Fahrenheit, pretty good for trout.

The water is clear; 2 feet below the surface, rocks and gravel are reassuringly visible. The banks are lined with alder, red-osier dogwood and short willows. Many of the alder branches lean far over the channel, shading it from the hot sun. Vigorous young red pine and spruce trees stand beyond the shrubs. Don says several groups have been planting evergreens along streams in the area, to shade the water and to establish longer-lived trees that aren’t prime eating for beavers. A long, narrow wooden structure covered with rocks hugs one edge of the creek. It’s another man-made improvement, designed to provide hiding places for trout.

We make our way back upstream to the junction and take readings there. The idea is to try to pinpoint cold spots, likely caused by groundwater springs or seeps. But the water seems to be about the same temperature all the way along. As we move upstream in Dutch Slough, the current abruptly slows and the channel gets deeper – Don is now chest-high in the middle of the stream – and the bottom is loaded with silt. Trout like deep, cool water (now it’s registering a few tenths of a degree colder); but the silt is not helpful; if any fish were to lay eggs here, they would be smothered in the muck.

Ahead, a jumble of sticks straddles the narrowing channel, probably food gathered by beavers a year or more ago. This beaver pantry would be a real challenge for us to wade through, and Don jokes that the job doesn’t pay enough to kill himself for, so we haul ourselves out and go back to share our experience with Raymond Saeland. He says the upstream portions are easier to navigate, and he hunts on a crowded key ring for the key that will open his gate to a trail along the stream. Don and Lorri will see how far they can get on that section, but I’m tired enough to quit for the day.

Apparently beavers and their activities are a hot topic among anglers. Don explains that new beaver dams can provide good trout habitat – the water gets deeper and colder – but over time, the slower-moving water turns into a pond and warms up, silt covers the bottom, and the fish can’t make it through the dam to reach better spawning grounds.

The next day I check with Lorri and Don on how the rest of their day went.

“Oh, my goodness,” says Lorri, “it was mucky again, an indication of old beaver dams. It was pretty impassible. You really would have to have a canoe to get very far.” I ask if they would try again on another stream. “Yes, I’m sure we will,” Lorri answers. “It’s a way we can help.”

This kind of work can only go on until mid-September, when temperatures cool off and the difference between stream water and groundwater won’t be so easily detected. The work will continue next summer. Trout Unlimited and NRRI are looking for more volunteers.