Craig Packer’s office is about as far away as you can get from Tanzania: 8,354 miles, to be exact. The room, on the fifth floor of the Ecology Building of the University of Minnesota in St. Paul faces east. “I have a great view of Wisconsin,” Packer jokes. It’s a nice view, but the Serengeti National Park it is not. Packer is the director of the Lion Research Center at the U of M, which he arrived at by happenstance in 1983. He had completed his Ph.D. at the University of Sussex in 1977, researching baboons with Jane Goodall, before moving on to research lions in 1978. When he came across a job opening in the ecology department at the U of M, Packer had already established his expertise, and the U offered him an irresistible opportunity: He’d be able to spend half his time at the university and half his time researching in Africa. The Lion Research Center was born.

Packer’s knowledge of lions can be disarming. He knows more about lions than most of us know about anything. When asked about the most interesting thing he’s learned about lions he laughs and says, “That’s asking to summarize two books and thousands of pages of research papers.”

Next week, in fact, he will publish his latest book, “Lions in the Balance: Man-Eaters, Manes, and Men with Guns,” about what he’s learned from decades of studying the animal in Africa. It’s a follow-up to his 1996 memoir, “Into Africa.”

If forced, Packer is able to narrow down his two most significant discoveries. The first involves manes. He learned the darker the mane, the healthier and more powerful the lion. Black manes are both more desirable to female lions, and more intimidating to other males. The research was noteworthy because it was the first time researchers established the significance of manes.

The second was discovering why lions work cooperatively, a rare trait among large cat species. In the savanna desert, where water is scarce, lions monopolize rivers for water and cover to hunt prey. They are forced to share land with family members in order to best defend their resources. In doing so, they developed the ability to work together.

Both these discoveries were breakthroughs in learning lion behavior, Packer’s primary focus in his more than 30 years of research.

In the last few years, Packer has worked with his graduate students in the U’s ecology department on how all animals interact with one another in the African wild. 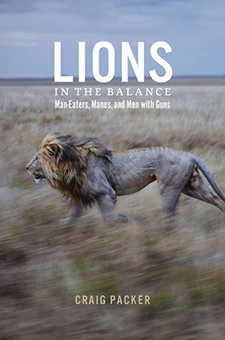 He currently oversees a projected started in 2010 by a former graduate student, Ali Swanson, called Snapshot Serengeti. Over a six-month period, Swanson placed 225 camera traps throughout 1,000 square kilometers (approximately 621 miles) of the Serengeti. The cameras take millions of photos on a constant loop, and show photos of lions, zebras, aardvarks, giraffes and myriad other animals.

“The cameras capture animals at their most candid and provide this little glimpse into their life,” Swanson says. “By putting the pictures together we can tell the story of how animals share the landscape.”

The photos are posted online, and the project allows people from across the world to log on and identify photos of animals. When averaged out, the crowd-sourced identifications prove to be incredibly accurate.

Though Swanson has obtained her Ph.D and moved on, Packer and his current research assistant, Meredith Palmer, continue to maintain Snapshot Serengeti.

Even as graduate students come and go, Packer remains the constant at the Lion Research Center. With each new student comes a new project, after all, and a new way of understanding creatures living in an environment that seems a world away from a fifth floor office in St Paul.