Two of the most basic questions about the world’s lakes have also been two of the hardest to answer: How many lakes are there on Earth? And how much water is in them?

The St. Croix Watershed Research Station and many others have been studying lakes for a long time, around the world. Of course, the station is located in Minnesota. Our state’s name means “sky-tinted waters” in the Dakota language.

While we have learned a lot about how lakes function as complicated ecosystems, we still haven’t known their number or volume.

Now, we have a better idea. Station scientist Dr. Adam Heathcote is part of a team including researchers from the Massachusetts Institute of Technology and Umeå University in Sweden that has calculated a new, more precise answer to those key questions. By using high-resolution satellite data and fractal geometry, they were able to estimate the amount of water in many small lakes that were missed by previous attempts.

The team found 27.8 million lakes at least two-and-a-half acres in size on Earth. They contain 47,743 cubic miles of water, which would fill 956 million of the world’s largest oil tankers.

To figure out the amount of water, the scientists first had to determine how many, how big, and how deep our planet’s lakes are. The researchers started with the most recent survey of the world’s lakes based on computer analyses of high-resolution satellite imagery. That’s how they calculated the overall number of lakes on Earth and their size.

To come up with the average depth, the team depended on unique geographical geometry in which the surface of the world is described by a fractal, a special type of pattern made up of shapes similar to the larger shape. In this case, the shapes are the hills and valleys, and likely spots for lakes.

While all fractals are formed by smaller and smaller versions of themselves, Earth’s topography is “self-affine,” meaning lakes get shallower relative to their size as they get smaller. 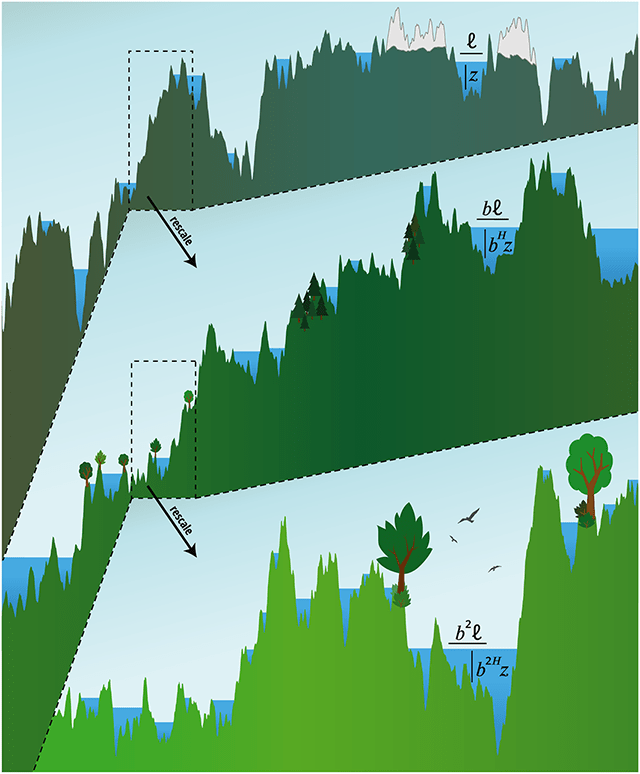 Image by Hannah Williams, LimeRed Studio, Chicago IL
This graphic shows the model of the Earth’s surface, “zoomed in” three times from top to bottom. In each section, the outlined part of the above image is magnified. The equation describes the scaling relationship of lake area to depth as you “zoom in.” See the author’s original paper linked at the end of this article for more details.

Analyzing 5,500 lakes where area and volume had been previously measured confirmed the team’s hunch that, like the hills and valleys that shape the Earth’s surface, the relationship between lakes’ area and depth remains similar as they get smaller.

When the scientists figured out the scaling relationships, they applied it to their measurements of all the lakes on the planet and their size – ten thousand times, to see how much it could vary.

Not only did the study come up with almost 50,000 cubic miles of water, their calculations found that the average depth of a lake on Earth is 138 feet, due to the fact that 80 percent of lake water is located in just 20 of the world’s largest lakes.

That might seem pretty deep, but it’s much shallower than previous estimates, and has worrying implications for preserving lake health and keeping greenhouse gasses out of the atmosphere.

A greater number of shallow lakes means the world’s water might be more sensitive to increases in nutrients from runoff from farms and other human landscapes than previously known. It takes smaller amounts of nutrients to turn a shallow lake green with algae and experience other harmful effects than a large, deep lake.

It could also mean a larger area of lakes could contribute to methane emissions, a key driver of climate change. If you’ve ever seen bubbles rising from the bottom of a lake, you’ve seen methane in action. The bubbles only make it to the surface in shallow water, where they then pop and release the gas into the air.

So, while it might be fun to think about how it would take 77,000 years to see all the lakes on Earth if you visited one each day, the team didn’t do the math just for fun. These new calculations will help other researchers calculate the amount of greenhouse gasses present in the world’s lakes, and help all of us better understand the scope of our challenges and the impact of possible solutions.

Minnesota has about five percent of America’s lakewater right here, with a total volume of 66 cubic miles (not counting Lake Superior). That’s about twice as much as a typical state. 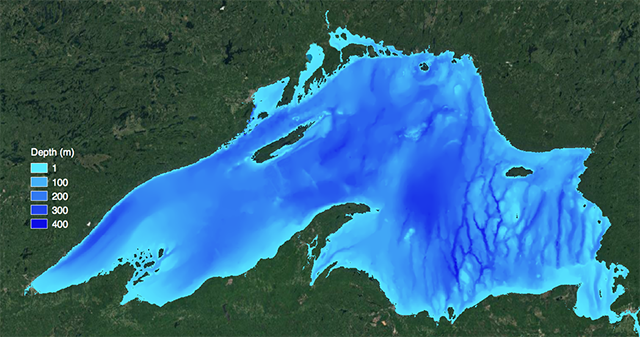 Depth map of Lake Superior based on bathymetry data supplied by NOAA and satellite imagery from Google Earth.

Our state’s most famous lake is surely Superior, the biggest freshwater lake in the world by surface area and, as it turns out, the largest volume of lakewater in the United States, and six percent of all the lake water in the world.

It’s so big that if you poured all the inland lakes in America into it, Superior wouldn’t even be half full. Its 2,900 cubic miles of water is more than in the other four Great Lakes combined, which contain another five percent of the world’s total lake water. They are truly great, and superior.

This article originally appeared on the website of The Science Museum of Minnesota.