What happened to winter?

If you live near the Twin Cities, forget snowshoes this year — there’s not enough snow on the ground these days to need them. Skis are forlorn after a couple laps on the trail, and the ice is thinning while skates never left the garage. So much for most outdoor winter recreation, unless you count trying to stay upright on icy sidewalks.

It certainly hasn’t felt like a winter wonderland in the Twin Cities this year. But has this winter really seen less snow than normal? Yes and no.

Snowfall — the amount of snow that fell from the sky — has been a bit below average across the months of October through January in the Twin Cities, according to data from the National Oceanic and Atmospheric Administration’s data from the weather station at the Minneapolis-St. Paul International Airport. In that time period, 26.5 inches of snow has fallen this year, while the average for that time period from 1970-present is 31.7 inches.

Twin Cities snowfall
Except for in December, the Twin Cities have seen snowfall levels below the 1970-present average each month this winter, according to data from a weather station at MSP International Airport. In February so far, the Twin Cities have received 0.3 inches of snow -- far below the average of 8.7 inches. Chart only shows data for full months in current year.
Source: NOAA

But most of that snow fell in December and January, while both November and February (so far), are far below average. Unless snowflakes start falling soon, February is looking very low-snowfall, with just 0.3 inches of the stuff.

So we're a bit below the average amount of snow to-date this year,  and the snow we've gotten has largely been concentrated in those two midwinter months.

Part of the reason this winter feels so unseasonably un-snowy is because the snow that has fallen hasn’t stuck around. The average snow depth in the Twin Cities, October through January this year was 1.2 inches, which is less than half the historic average, 2.8 inches. So far this month, the average snow depth is zero.

Partly, it’s because some of the storms that have passed through the state have lost moisture before they got here, said Tony Zaleski, a National Weather Service meteorologist based in Chanhassen.

But it’s also because of unseasonably warm temperatures, said Mark Seeley, a University of Minnesota professor of soil, water and climate and longtime weather commentator on Minnesota Public Radio. October through January, the average temperature in the Twin Cities was more than five degrees warmer than average.

That means some of the precipitation that in colder years might have fallen as snow manifested as rain.

It also means more of that thaw-in-the-day, freeze-at-night phenomenon that results in icy roads.

“It’s been a terrible winter for ice — lots of accidents, pedestrian and vehicle,” Seeley said.

Plenty of snow up north

While the southern two-thirds of the state have been less snowy than average, things are looking pretty normal — or above normal — up north. 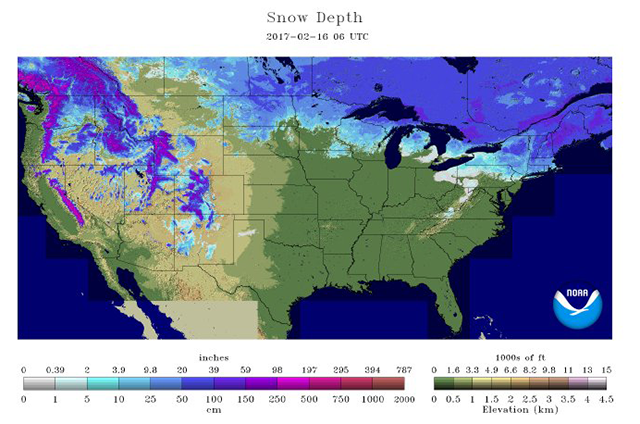 Northern Minnesota — especially northeast Lake, Cook and St. Louis counties — tends to be snowier than the rest of the state due to colder temperatures, and its location more often in pathway of Alberta Clippers that blow snowy weather in from the Canadian Rockies, Seeley said. And this winter’s no exception.

International Falls, MN snowfall
International Falls, in northeastern Minnesota, has seen snowfall above the 1970-present average most months this winter. So far in February, it's received 11.4 inches of snow — above the February average of 11.2. For current year snowfall, this chart only shows data for full months.
Source: National Oceanic and Atmospheric Association

Up in International Falls, in northeastern Minnesota, snow depth so far this season is average, and snowfall is above average.

Talk to just about any long time Minnesotan, and they’ll tell you winters just aren’t like they used to be.

While there’s certainly exceptions — like the polar vortex winter in 2013-14 — they’d be right, Seeley says: winters have gotten warmer and less snowy on average.

Six of the 10 warmest December through Februaries since 1895 have been in the last 20 years, he said. Barring some really cold weather in the next couple weeks, this winter’s likely to join that ranking.

“Winter is the season of the year that’s warmed the most in Minnesota,” Seeley said.

How do things look in the next couple months?

Anything goes in March.

“March is our most erratic snow month. Here in the metro area we’ve had anywhere from 1 inch to 40 inches in March, which is a pretty wide spread,” Seeley said. But if warmer temperatures continue to prevail as weather models predict, he said, March could be more wet than snowy.

As we look ahead to the growing season, the state’s in pretty good shape, ground moisture-wise, despite the low-snow winter, Seeley said.

“Fortunately, the bank account of moisture stored in the soil is pretty robust,” he said. “Most of our soil’s filled up with adequate storage, so our farmers can look forward to planting this spring into a seed bed that’s probably going to have plenty of root zone moisture.”