When the weather gets bad — like it did with this week’s messy reintroduction to winter — public works crews get to work, scraping up the snow and dropping tons of salt on roads across Minnesota.

The salt is a point of contention. It’s pretty good for getting rid of dangerous ice, but it has some nasty side effects: When ice and snow melt, the runoff carries salt into the watershed, where it wreaks havoc on the environment.

But winter storms like Monday’s leave public works crews without a lot of options — whatever the long-term risk to the environment of using salt, the combination of ice on the roads and commuters represents an immediate risk to public safety. So often, salt it is.

In recent years, some Minnesota jurisdictions have adopted a relatively simple method to clear ice from the roads using far less salt, however: treating the roads with brine — a combination of salt and water that prevents ice from forming and helps break it down.

The equipment for making and spreading brine requires an investment up-front, but once it’s in place it can cut costs and reduce salt use by as much as 40 to 70 percent. And as researchers continue to see rising chloride levels in lakes, the Minnesota Pollution Control Agency is working to educate jurisdictions across the state about brining (aka liquid de-icing) and other ways to cut back the amount of salt flowing into the state’s waters.

Salt wasn’t always the go-to method for clearing roads. Until the ’80s, crews mostly used sand to make Minnesota roads safer for travel, said Brooke Asleson, watershed project manager for the MPCA. But while sand provides more traction for vehicles, it doesn’t get rid of the ice. Salt, which works by lowering the melting point of water, does.

As salt use became more widespread, drivers began to expect better driving conditions, which in turn led to more demand for the use of salt. Today, an estimated 20 million tons of salt is used to de-ice roads each year across the U.S.

It doesn’t take Great Salt Lake levels of chloride for water to start being dangerous for some plants and animals. With just a teaspoon of salt per five gallons of water, a body of water is considered polluted.

In the Twin Cities alone, 39 bodies of water — including Lake Como in St. Paul, Brownie Lake in Minneapolis and Minnehaha Creek — have been found to be at or above that level of 230 milligrams per liter. Another 40 bodies of water are close, largely due to winter de-icing and salt used in water softeners, Asleson said.

The effects of such pollution are wide-ranging. Chloride seeps into the ground, adversely affecting drinking water in wells. Some research has found that frogs procreating in polluted waters produce more males than females, throwing off population dynamics. And ultimately, it can erase native plants and animals from habitats and allow invasive species that thrive in salt water, like carp, to take over.

While some chemical compounds break down quickly, chloride remains in the water, and in soil, until it’s diluted out, which is why researchers believe that by 2050, some Twin Cities lakes may not be able to support aquatic life.

Jim Sanborn doesn’t want that to happen to Waconia, where he serves as mayor and where water (including Lake Waconia) is a big part of the appeal for residents and visitors alike.

“I don’t think the city would have been founded here 150 years ago if it wasn’t for the lakes, and we certainly don’t want to do anything to damage that resource,” Sanborn said.

Whereas rock salt has to begin dissolving on the road before it starts to melt ice, mixing the salt and water ahead of time means the solution is ready to start working as soon as it hits the pavement. The ratio of water to chloride products can be adjusted based on the weather conditions, and roads can be pre-treated with brine before it snows. Since it’s easier to spray water evenly across the road’s surface than to to spread salt and sand, the method is more efficient. Cities that have adopted this liquid de-icing method have recouped the cost of equipment because of reduced salt use in under three years, Asleson said. 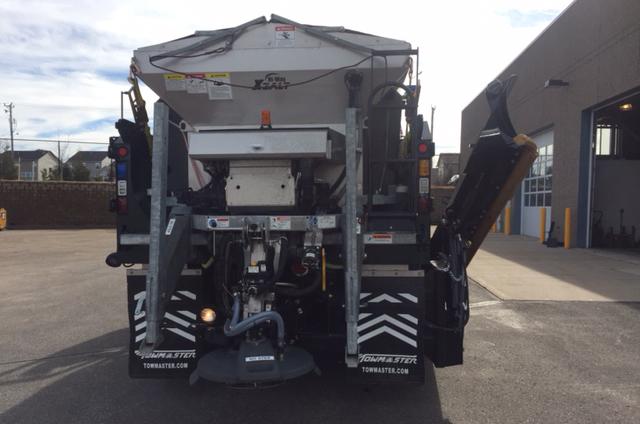 Courtesy of the City of Waconia
Waconia’s newest trucks have the ability to spray brine or spread rock salt, depending on conditions.

It doesn’t work in all weather, though: if it rains before the snow flies, like it did in Monday’s storm, any brine pre-treatment is likely to wash off the pavement before it can be effective. In such cases, and when the weather is very cold, which makes it less effective, Waconia may supplmement with rock salt, Eldred said.

An increasing number of jurisdictions, including Minneapolis, St. Paul, Minnetonka, Prior Lake, Richfield and Dakota County, have adopted liquid de-icing as part of their winter road regimen, Asleson said. But she called Waconia a superstar adopter.

“They’ve been kind of leading the way as far as coming up with ways to reduce their salt use, but maintaining a good level of safety as well,” she said.

In Waconia, you don’t have to look at the forecast to know if it’s expected to snow, the mayor joked — since the liquid method allows pre-treatment of pavement, the white lines of brine left by trucks serve as an indicator. And thanks to liquid de-icing, the city has cut its use of salt by as much as 70 percent, which has saved it money and reduced the amount of salt going into its waters.

“It has allowed us to use considerably less salt and reduce the impact of chlorides,” Eldred told MinnPost.

The MPCA is trying to get jurisdictions that use salt on their roads to use less. It has a web portal that helps local governments weigh the costs of different methods of using less salt, from calibrating trucks, which makes them more precise, to using brine. It holds trainings and recommends computer software that helps cities determine exactly when, where and how to de-ice, resulting in about 50 percent less salt use, Asleson said.

“We work really hard to make sure people understand these practices to protect our water resources,” Asleson said.  “If each community could reduce their road salt use by 50 percent, we would be so much better off from an environmental perspective.”