A half-century ago, smoking was a fixture in American life. You could smoke at work, in hospitals, on a plane — not to mention in restaurants and bars, from which the stale smell of spent cigarettes followed you home. More than four in 10 American men smoked, and a third of women did.

That began to change after research linked cigarettes to life-shortening illnesses. Over time, more people opted to avoid the risk of breathing smoke that could cause blackened lungs, emphysema and cancer. Today, the share of Americans smoking compared to the late ’60s has been cut by more than half, according to the Centers for Disease Control.

Undoubtedly, that fewer people sucking in cigarette fumes is a good thing for public health, but unfortunately, tobacco smoke is not the only airborne killer. Breathing in the small particle-polluted air found, in varying degrees, pretty much everywhere has health risks, too. And unlike smoking, breathing isn’t optional.

According to research out of Berkeley, California, Minnesotans take in negative health effects equivalent to about a quarter two a third of a cigarette on a regular day, depending on where they live, in pollution. That’s up to 10 cigarettes a month, or six packs of cigarettes a year.

If that’s surprising, that’s kind of the point.

Richard Muller, the founder and scientific director of Berkeley Earth, a nonprofit that works on climate science, and a professor emeritus of physics at the University of California-Berkeley, and his daughter Elizabeth Muller, also a co-founder of Berkeley Earth, put pollution in terms of cigarette smoking in the hopes of emphasizing how pollution can kill people just like smoking does.

“It’s amazing to me how much that has affected people, far more effectively than telling how many deaths it causes,” Richard Muller said. “It’s remarkable to me that (deaths per year) remains somewhat abstract, but when you say every man, woman and child is smoking,” it sticks.

The researchers aren’t drawing a direct comparison between smoking and breathing polluted air, exactly. Instead, they’re comparing the relative health effects of the two.

You could apply the same math to really any cause of death, but cigarette smoke seemed the best analogy.

The type of pollution Muller’s concerned with is called PM2.5, which, as opposed to smog caused by larger particles, looks like haze, Muller said. It’s made of particles that are 2.5 micrometers or smaller — a tenth the width of a strand of fine of hair. Particles that small are dangerous because they’re too small for the cilia in our lungs to keep out, Muller said. They lodge themselves in, leading to heart attacks, asthma attacks and bronchitis.

It’s not necessarily the PM2.5 particles in cigarette smoke that make people sick.

So, how does this comparison work?

Using data from China, where research on the health effects of PM2.5 pollution has been done, the researchers found 1.6 million people die per year from an average exposure to 52 micrograms per cubic meter of PM2.5.

That amount of exposure, they found, is roughly equivalent to smoking 2.4 cigarettes per day, which means one cigarette per day is equivalent to about 22 micrograms per cubic meter of PM2.5.

So, if you divide PM2.5 levels in a given area by 22, you get the rough equivalent in cigarettes smoked each day. You can do the calculations for yourself for much of the world using the PM2.5 concentration levels on the pollution map here.

“The way we make the comparison is simply if you are worried about a cigarette because it has some chance of death then you should be worried about air pollution,” Muller said.

That’s how we come to the estimate that Minnesotans, depending on where they live, how fast the wind is blowing, and what’s polluting the air on that particular day, are smoking between a quarter and a third of a cigarette on an average day.

This morning Minnesotans were experiencing health effects due to pollution equivalent to:

-0.9 cigarettes a day in Minneapolis-St. Paul.

-0.5 cigarettes a day in Rochester.

That’s actually not that bad, compared to other cities in the U.S. and the world.

The average U.S. PM2.5 equivalent is 0.4 cigarettes per day, according to the Mullers. But levels are often higher in cities.

In the European Union, the average is 1.6 cigarettes. Beijing on a bad day; 25, and in Shenyang, China, on the worst day recorded; 63.

In Minnesota in 2011, 40 percent of PM2.5 emitted directly from combustion sources came from residential wood burning, 20 from percent facility emissions, 10 percent from construction, agricultural and recreational equipment, 10 percent from industrial and commercial fuel combustion and 5 percent from diesel and gasoline vehicles on the roads, Kari Palmer of the MPCA.

The biggest sources of airborne particulate matter in the state are actually of a secondary sort; the result of chemical reactions between pollutants like nitrogen oxides, sulfur oxides and ammonia released by some of these polluters. 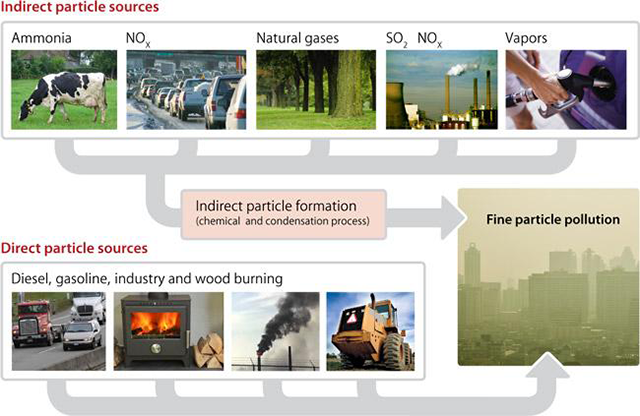 These days, Muller says barely anyone has heard of PM2.5, but he thinks that’s going to change.

Pollution, Muller says, has a hand in more than 6,000 deaths globally every day —4,400 deaths a day in China, Muller said.

(For interested parties, developers created an app called “Shit, I Smoke!” that tells you how many cigarettes worth of pollution you’re taking in based on your location).