Good morning, America, how are ya?

Kind of smelly of late in Parrish, Alabama, where a train filled with human feces from New York City, bound a thousand miles away for a landfill in Adamsville, Alabama, was parked from February to mid-April causing a big stink.

The train stopped in its tracks as another local jurisdiction prevented it from passing through, the Washington Post reported. The matter was resolved in mid-April when the treated sewer sludge was removed truckload by truckload.

As for how a train full of dung from New York came to be stopped in Alabama, well, the city dumped its feces into the ocean until about 30 years ago. When the federal government put the kibosh on that practice, New York started looking for other solutions.

One was to ship some of its fecal matter — that’s biosolids in polite company — to landfills. Over time, the city’s had to send the sludge farther away because nearby landfills have tightened restrictions on accepting such material and received complaints, says the Associated Press.

There are no fecal freighters hauling out of Minnesota, says the Minnesota Pollution Control Agency. Instead, incineration accounts for about 61 percent of biosolid processing, compared to 21 percent used as farm fertilizer and 18 percent that is landfilled.

So if you thought burning biosolids was something only high school kids do on doorsteps, think again. By far, by mass, the most common method of processing human feces in Minnesota is by fire.

Here’s how the system works.

Step 1: From flush to facility

Whoever you are, wherever you flush, the contents of the toilet bowl have to go somewhere.

If you live in the Twin Cities area, they end up at one of the Metropolitan Council’s eight wastewater treatment facilities, dispersed throughout the region.

In the Twin Cities, most sewage ends up at the biggest of all the plants, the Metro Plant, between Pig’s Eye Lake and the Mississippi River on the southeast side of St. Paul.

At the plant, built in 1938 but updated since, an original meter, aptly named a Chronoflo, measures the incoming flow rate. On a Monday earlier this month, it showed more than 160 million gallons per day coming in. 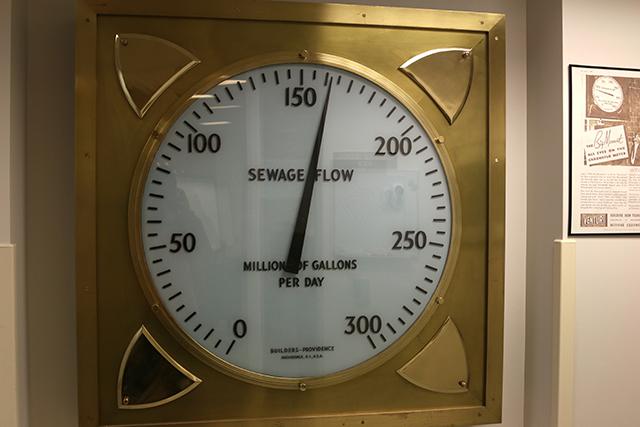 Sewage from Forest Lake, the northernmost corner of the MetCouncil’s sewage service area, takes about a day to get to the Metro Plant, said assistant general manager of operations for the Met Council’s Environmental Services Mike Mereness. From Hopkins, it should take less than eight hours, and in Minneapolis, about three.

Before anything gets processed, the wastewater treatment plant needs to separate the liquids from the solids.

This happens in a series of steps: first, the sewage flows through a building with rake-like mechanical devices that pull larger things like candy wrappers and sanitary napkins out of it, lifting them up and dumping them onto a conveyor belt. 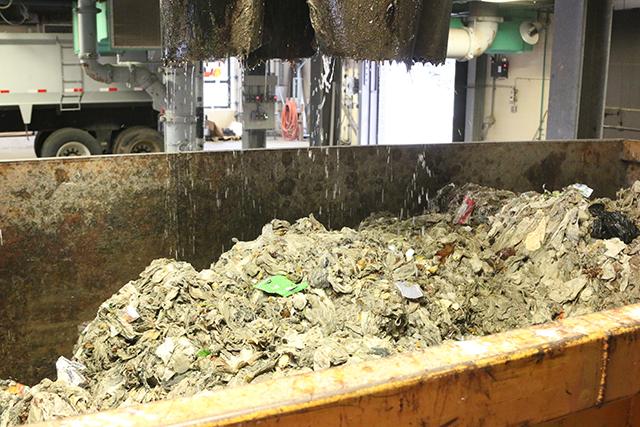 MinnPost photo by Greta Kaul
The sewage flows through a building with rake-like mechanical devices that pull larger things like candy wrappers and sanitary napkins out of it. Then, the objects are dropped into a dumpster.

From there, the soggy objects are dropped into a dumpster.

The sewage then flows into a series of pools, where the liquids and solids are separated and where microorganisms eat pollutants. In one pool, boards, linked by chains, circulate on the top and bottom of the pool, moving solids out. 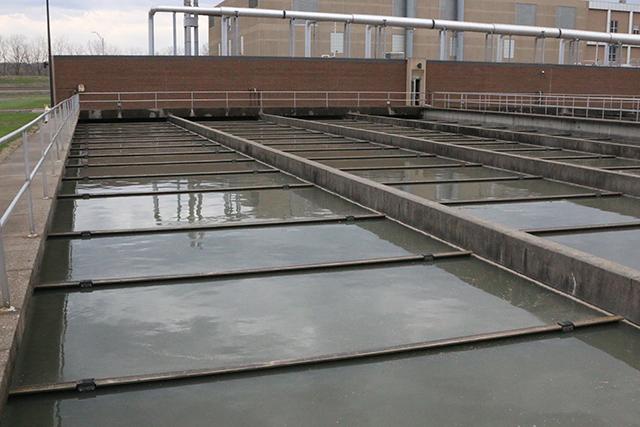 MinnPost photo by Greta Kaul
The solids settle to the bottom of the tank and are separated from the liquids.

Once the liquids are purified through the treatment process, they’re ready to be released to the Mississippi River (some of the water is reused at the plant, too). In the warmer months when more people are on and near the river, water from the Metro Plant is treated with bleach-like product to kill any pathogens. When water is treated like that, it’s neutralized before it goes back into the river so it doesn’t wreak havoc on habitats. 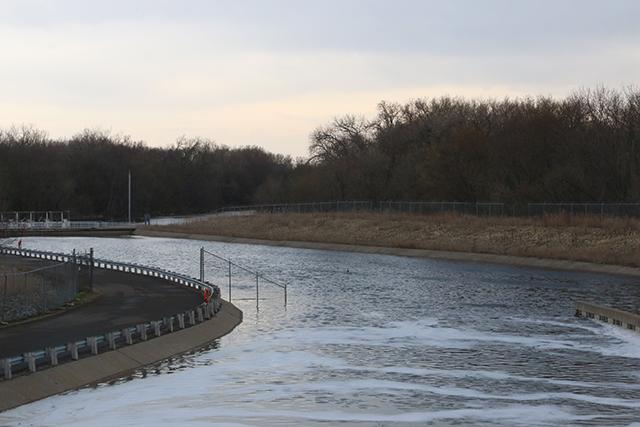 MinnPost photo by Greta Kaul
In warmer months when there are people on and near the river, water leaving the Metro Plant is treated with a bleach-like product, which is neutralized before before it hits the river.

The water treated at the Metro Plant isn’t drinking water, but by the time it hits the Mississippi, the treated water is cleaner than the river, Mereness said.

Now that the solids have been separated out into their own muddy water-like state, it’s time for them to be dealt with.

Initially, less than 1 percent of the materials coming into the Metro Plant are non-liquid, and the solids that come separated out from the liquids are pretty fluid too.

So they’re thickened up to about the consistency of cookie dough.

“You could make a snowball out of it.”

At that consistency, the biosolids are funneled into the incinerators. 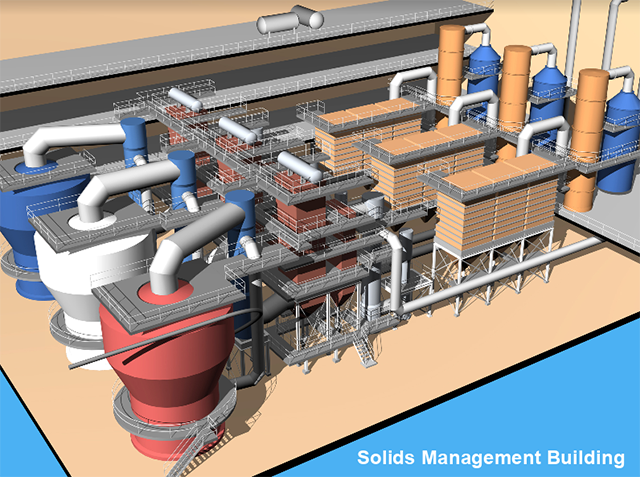 All those biosolids are reduced to about 45 tons of ash, which is landfilled (the plant is looking at options for recycling the ash). But the facility also includes technology that turns some of the energy made in the process into steam, which generates energy for the plant.

“The amount of energy that we recover would be comparable to heating over 3,500 homes a year,” Mereness said. The energy recovered saves about $2.5 million per year in energy costs at the plant.

And especially compared to the way sewage was disposed of well into the 20th century in the Twin Cities — that is, dumped raw into the river, it’s much, much more environmentally friendly (not to mention less smelly).

All told, the average drop of sewage spends less than 24 hours in the Metro Plant, Mereness said.

Travel around the state, and you’ll find variations of this process in use at wastewater treatment plants.

Only three, including the metro plant, use incineration as a practice, said Sherry Bock, biosolids program coordinator for the Minnesota Pollution Control Agency.

Through the land application program many wastewater treatment facilities use, about 21 percent of biosolids in Minnesota are used as agricultural fertilizer. That might sound like a lot, but it covers only 0.001 percent of the state’s crop land, Bock said. Sometimes, it’s dried and applied, and sometimes, it’s used as a liquid.

On first blush, that might sound, well, kind of gross.

But the poo goes through a rigorous process to ensure it doesn’t contain harmful bacteria (often, it’s enclosed in a container at a certain temperature for a certain period of time to kill off pathogens) that could make people sick. It’s also tested to make sure it has acceptable levels of metals, and treated so as not to attract pests that transmit disease.

Furthermore, there are strict rules about where this fertilizer can be used.

“We want the nitrogen to be used by plants, that is our whole goal, making sure those nutrients are going to be used by the crops,” Bock said. The stuff is free for farmers, though they may pay fees for things like transportation.

While there are a few agreements for using poop as fertilizer across state lines, such as in Wisconsin, the majority of biosolids generated in Minnesota are are managed or reused here, Bock said.

Which is all to say:  you won’t be hearing about poop trains from Minnesota stranded in faraway states.