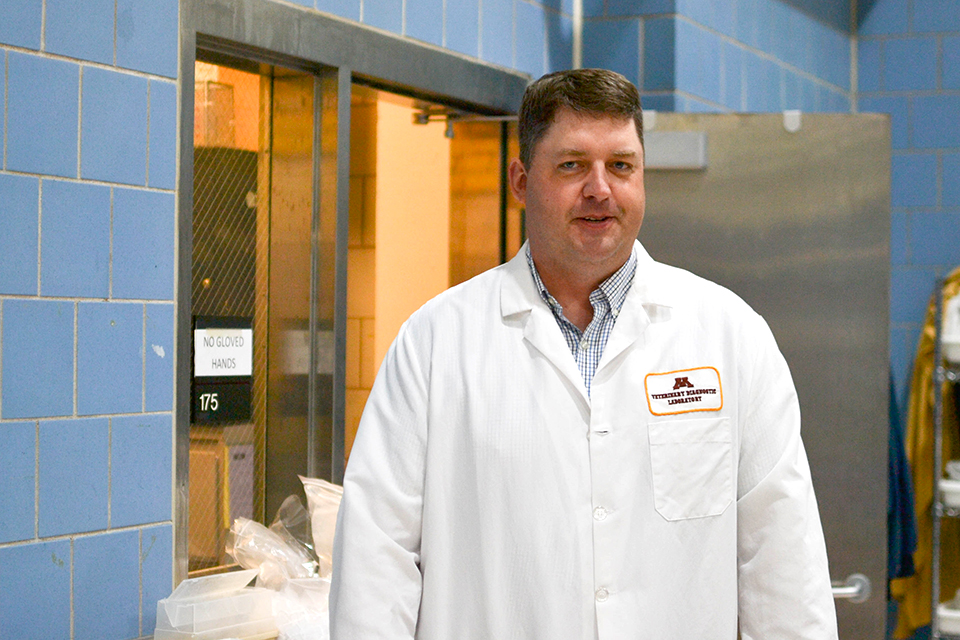 In February, Jeremy Schefers came to the Legislature with a warning.

Without new and better testing technology, the rapid spread of the deer plague known as chronic wasting disease would be tough to slow. And while CWD hasn’t jumped to humans as mad cow disease did, the University of Minnesota pathologist told lawmakers it’s a possibility health officials can help prevent.

The current test for CWD at the U takes at least two weeks and requires tissue samples from a dead deer. It’s known as an immunohistochemistry test, or IHC, and in Minnesota it can only be done at the U. “This only tells us where CWD was, not where it is,” Schefers told MinnPost last week. “So we’re so far behind the eight ball.”

The Legislature took Schefers’ advice, approving $1.8 million for the U to develop faster, easier and more useful ways to track and diagnose CWD.

The contagious disease is caused by self-replicating, abnormal proteins called prions and is always fatal. It affects deer and other cervids, such as elk and moose. Schefers said when a deer gets chronic wasting disease the prions infect the lymph nodes and then eventually spread to the brain. After that, the disease begins to “alter brain function,” he said.

“They don’t eat well, they don’t swallow well, they start to waste away,” Schefers said. “So that’s how it gets the wasting disease [name].”

Nearly all deer and elk that die at farms in Minnesota must be tagged and tested for CWD. The U lab gets between 4,000 and 5,000 cervids to test each year, some from other states like Wisconsin.

There are thousands of CWD cases in Wisconsin. As of June, Minnesota has found CWD on only eight cervid farms, including a deer farm in Crow Wing County. Since 2016, about 50 wild deer have tested positive for the disease in southeast Minnesota, the state’s biggest hotspot.

Still, CWD has threatened the cervid farming industry and forced owners to kill herds. It has also likely suppressed deer hunting. While sales of deer hunting licenses dropped 4.6 percent in Minnesota over the last two years, they fell as much as 11.5 percent in regions known to have CWD. The deer hunting industry generates more than $500 million for the state’s economy each year and helps pay for the budget at the Department of Natural Resources (DNR).

From the Veterinary Diagnostics Lab on the U’s St. Paul campus, Schefers showed MinnPost how the test works and how researchers expect to develop the new tests for CWD.

First, a deer farmer must harvest part of the brain stem and a lymph node in the head to send the U. Next, scientists put the tissues in formalin — water and formaldehyde — for five days to preserve them. 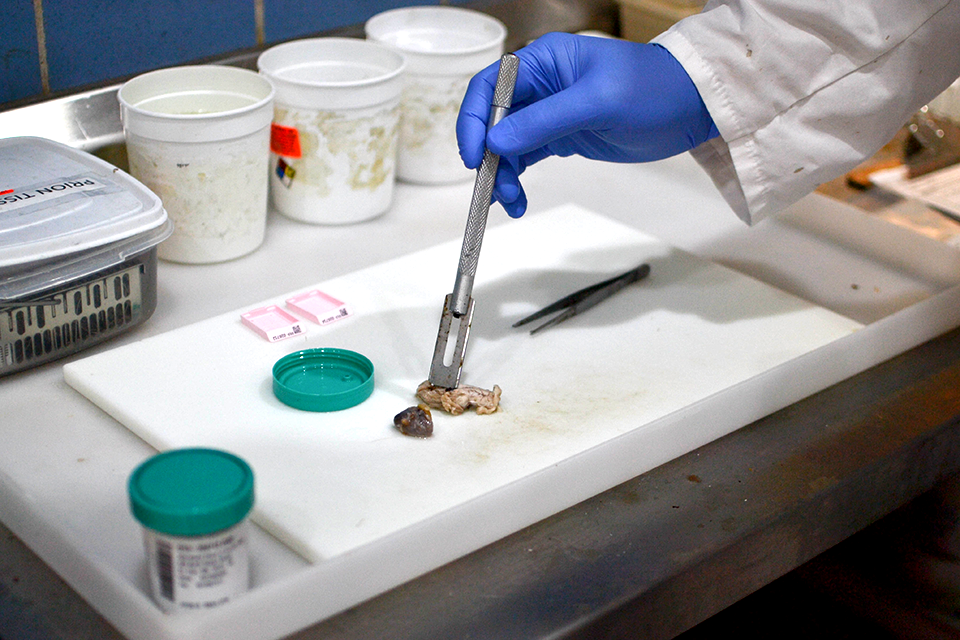 MinnPost photo by Walker Orenstein
A brain stem and a lymph node of a cervid.

Scientists cut out a section of the brainstem called the obex and transport it to another part of the lab for more processing. 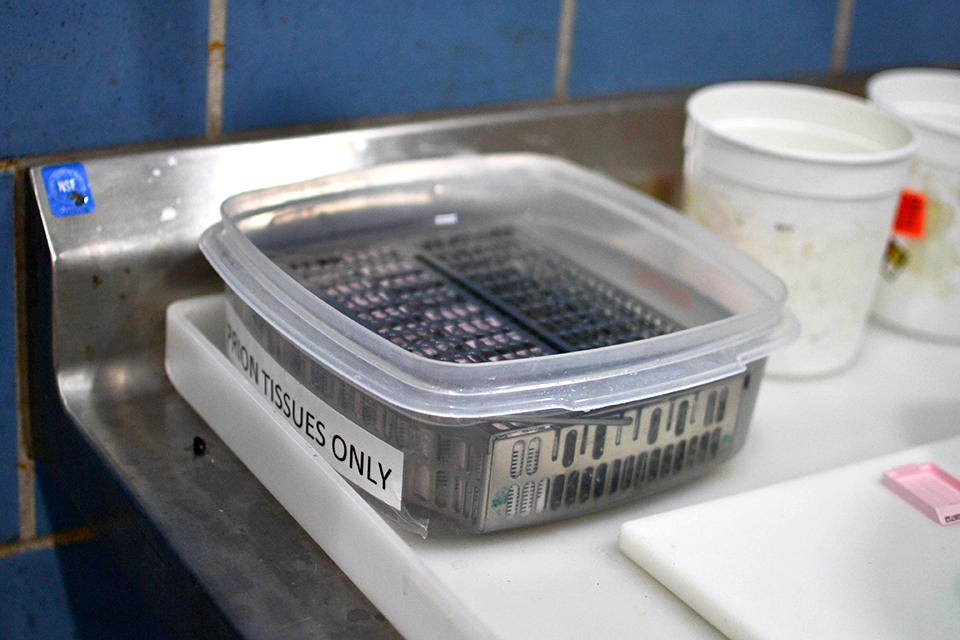 The tissues then go into a processor in which they are embedded in paraffin wax. A microtome shaves a section roughly the thickness of a red blood cell. That’s eventually transferred to a glass slide and stained to reveal abnormal prions. 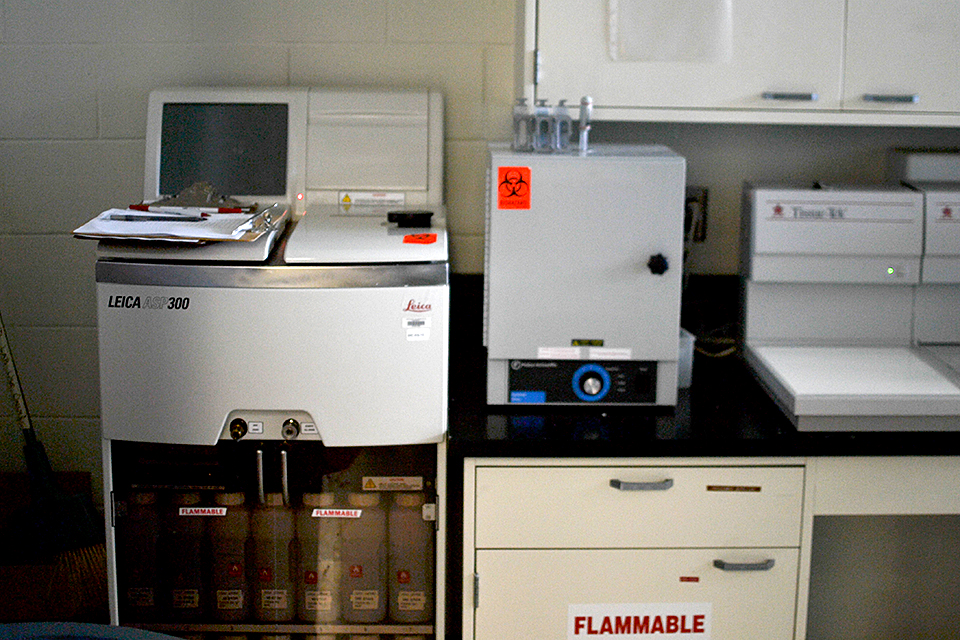 MinnPost photo by Walker Orenstein
A tissue processor that prepares a sample to be embedded in paraffin wax.

CWD is caused by abnormal prion proteins, but deer brains also have normal prion proteins. The sample is put in a “decloaking chamber” to remove benign prions. The misfolded prion of CWD remains. “They’re basically pressure cookers,” Schefers said of the chambers. 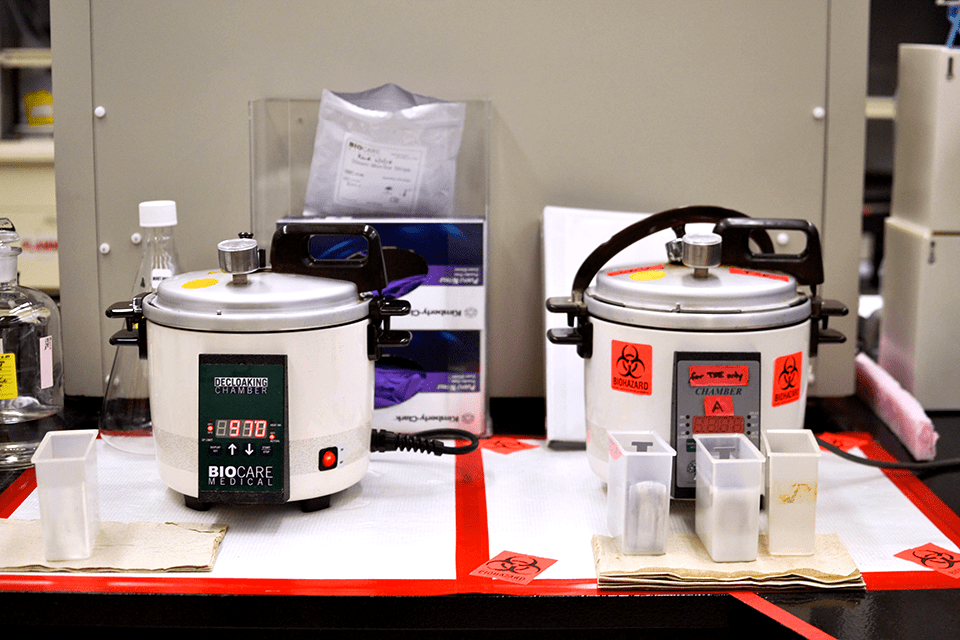 MinnPost photo by Walker Orenstein
A "decloaking chamber" to rid a sample of normal prions.

The sample is then put in a stainer, which marks CWD-positive tissues. The U had one dedicated to CWD testing, although it is defunct. Schefers said a new one costs $200,000 and the U expects to buy one with the $1.8 million approved by the Legislature.

For now, the U sends samples to Michigan State University to be stained. This adds another week to the already lengthy process. 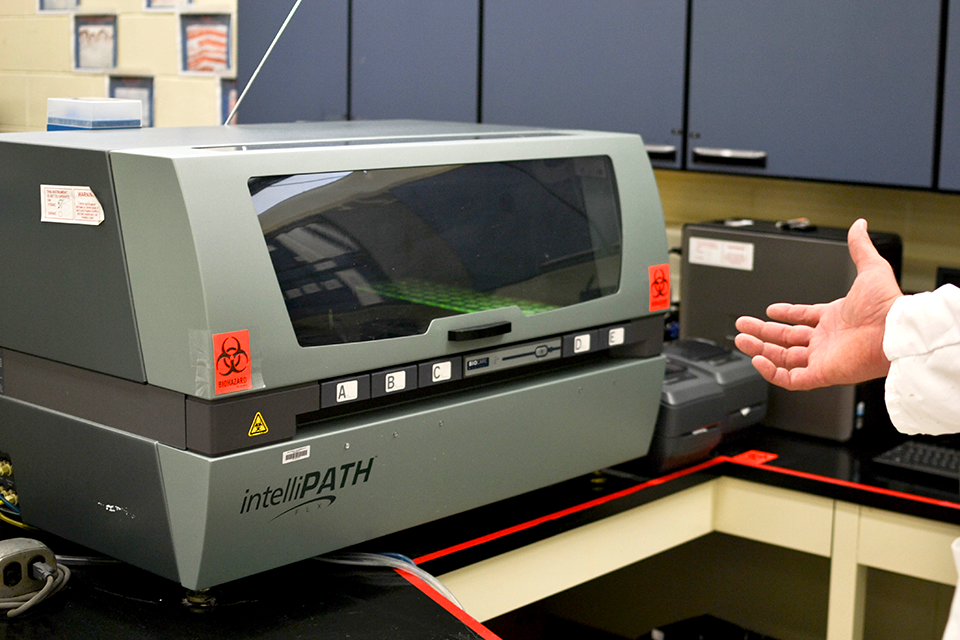 Once slides are completed, Schefers examines them on a microscope in his office to determine if the animal had CWD. 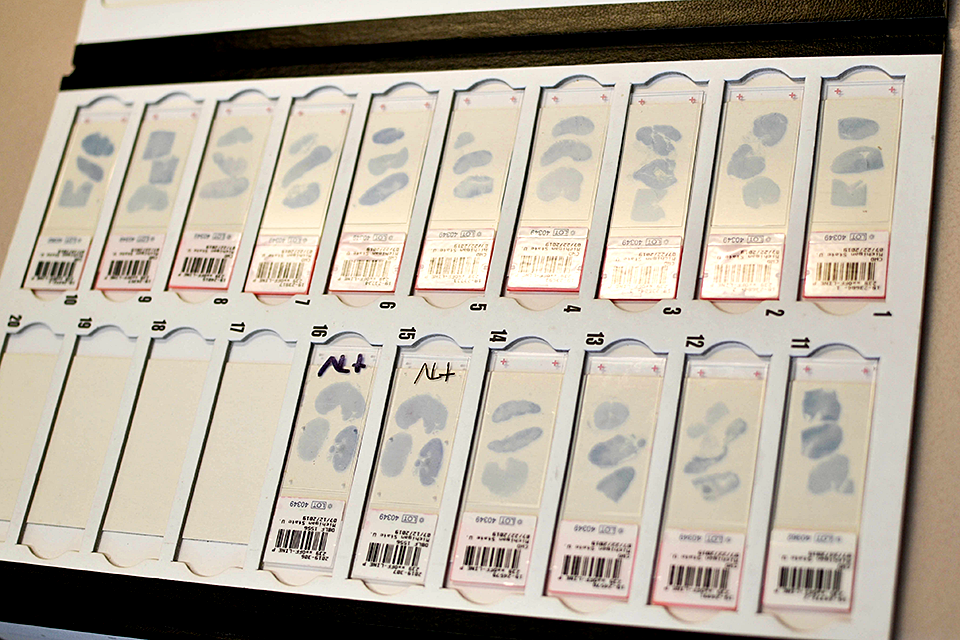 If a cervid tests positive, the U must match DNA from the tissue sample to DNA on an ear tag sent in by a farmer to ensure there wasn’t a mixup. 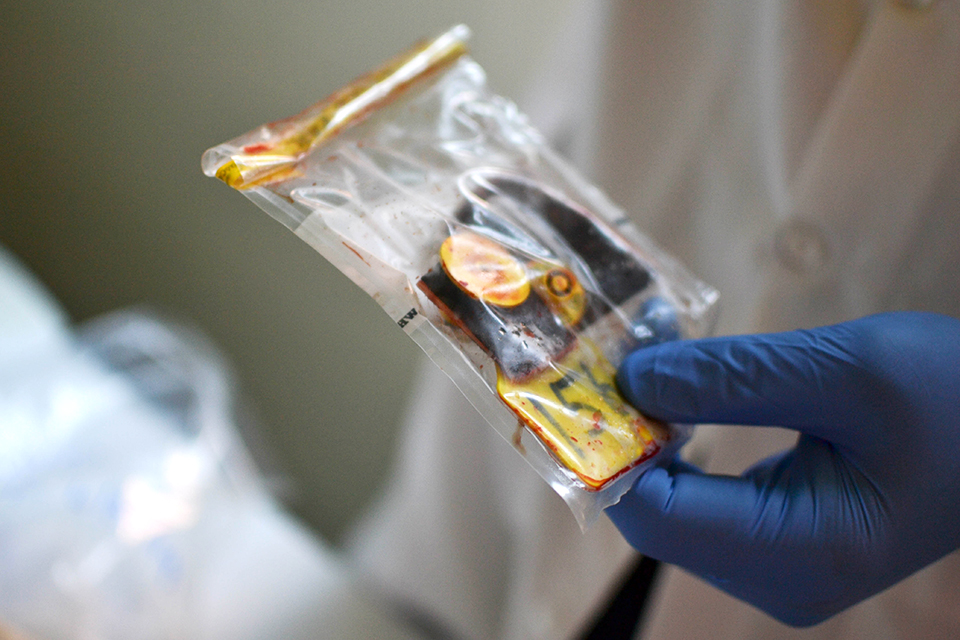 MinnPost photo by Walker Orenstein
An ear tag kept in a freezer from a cervid being tested for CWD. 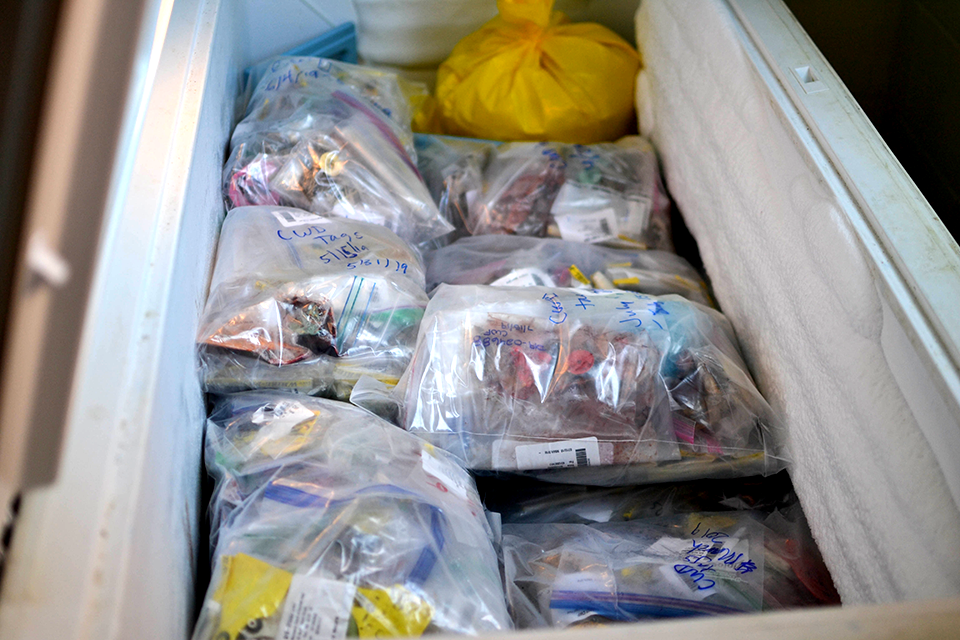 MinnPost photo by Walker Orenstein
A freezer full of ear tags for cervids being tested for CWD.

Eventually, all cervid remains that test positive for CWD must be disposed of. But prions are highly resistant to heat, cold and disinfectants. Schefers cleans tools with a solution that is half bleach.

The animals themselves are often put in an alkaline tissue digester, which Schefers called “Minnesota’s largest pressure cooker.” In addition to steam and heat, the digester uses potassium hydroxide, which is also known as KOH. KOH has a pH of 14 — which is the most potent an alkali can get and is stronger than ammonia. Once added to the tissues, the concoction has a pH of 11, Schefers said.

“So we know that heat, drying things out — desiccation — and a lot of disinfectants can’t destroy a prion,” Schefers said. “But what does is fairly significant swings in pH.” 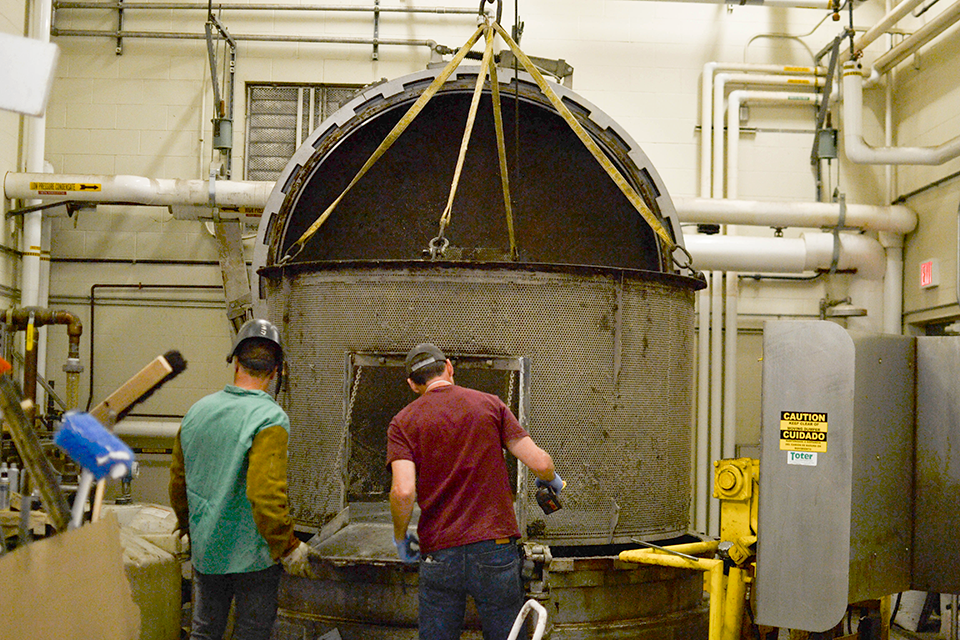 Altogether, the digester dials up 60 pounds of pressure and more than 300 degrees of heat. That cooks for 12 hours with the KOH, after which 85 percent of a deer carcass turns into sterile liquid that is sent to the sewage system, Schefers said. About 15 percent — all bone — remains, which is composted on campus at the U.

The digester is the only one in the state, expensive to run, 13 years old and beginning to wear out, Schefers said. But it’s used for other animals with infectious diseases too, like the prion disease in sheep called scrapie. It’s also better than the alternative of burying diseased animals in a biomedical landfill that risks being dug up, Schefers said. “I get a lot of questions about the safety of that,” he said. “I don't know what to tell them.” 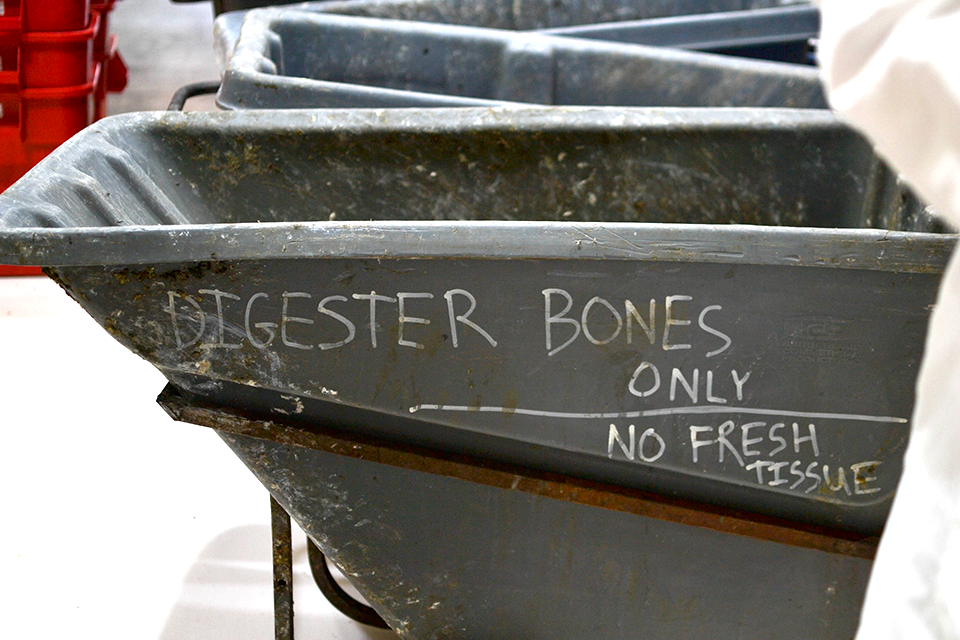 MinnPost photo by Walker Orenstein
A container for animal bones to be composted after the alkaline tissue digester.

Since the Legislature approved money for the U, researchers are now working toward creating faster and more comprehensive tests for CWD.

First, they plan to create a new test that relies on biosensors that can detect prions that cause CWD based on technology that U engineer Sang-Hyun Oh has developed for pathogens like Salmonella, said Peter Larsen, a professor in the veterinary and biomedical sciences department. Larsen is also working on the project.

The U will take components from other existing tests, including one used to detect CWD and other diseases known as an enzyme-linked immunosorbent assay, or ELISA. That test — which is available commercially and used at Colorado State University and the University of Wisconsin — uses only a ground lymph node and a machine to make a diagnosis. It takes one day and doesn’t require formalin or glass slides, Schefers said.

But Larsen said the ELISA test is not sensitive enough and has “significant limitations.”

Eventually, the U expects to create a mobile test that uses a handheld “flow cell” diagnostic device that connects to a computer through a USB port. People could put a cervid lymph node or “environmental” samples like soil or feces in the device and could get results on a computer or phone within hours.

The technology is still being developed and Schefers and Larsen declined to give specifics, saying they are guarding intellectual property. But Schefers said U engineers tell him it’s “not hard” to execute. “I keep asking them: ‘On a scale of one to 10, how confident are you that this is going to work?’ They keep saying: ‘nine.’ ” 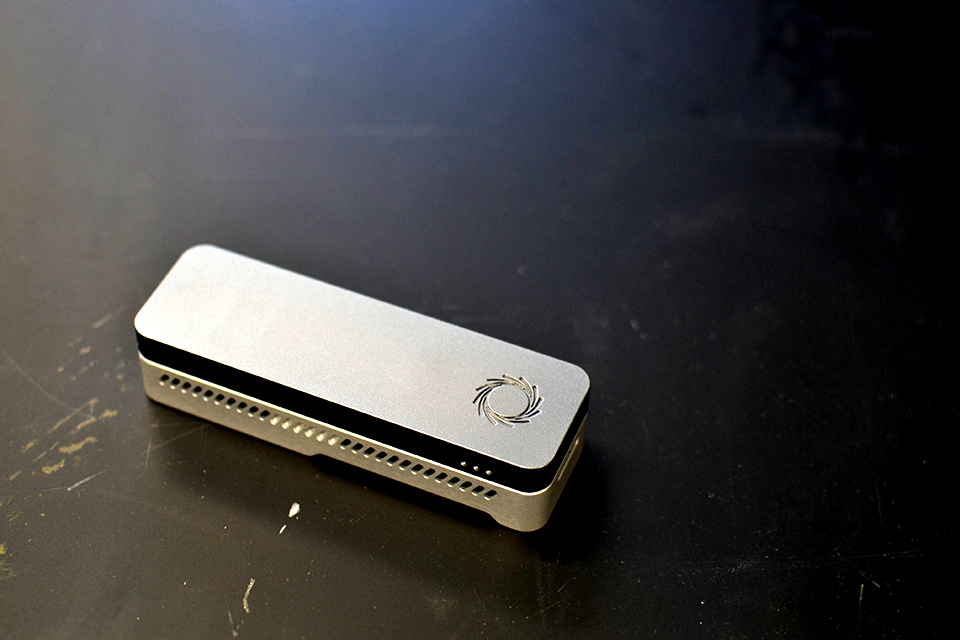 If the U is successful, hunters could have a cheap and easy way to test deer without sending multiple tissue samples across the state — or country. Positive results can still be confirmed by the traditional IHC test, which Schefers called the “gold standard.”

“That's to keep people hunting,” he said of the flow cell device. “Do you want to know if it had CWD? $20. Then you'll know in an hour, two hours, three, or whatever it takes. Not two weeks.”

Larsen said the immediate goal, however, is to create a prototype of the device that can be used by state regulators at the DNR and Board of Animal Health while doing research outside of a lab.

The second new test is easier — and not all that new. Schefers said they expect to use a lab technique to test for CWD prions that was originally developed to test humans for prions using blood and nasal swabs. While humans have not gotten CWD, they have caught a prion disease known as Creutzfeldt–Jakob from mad cow disease. Larsen said it’s also used to detect many diseases related to misfolded proteins, including Parkinson’s.

Known as an RT-QuIC, the procedure includes shaking the sample being tested to help reveal dangerous prions. 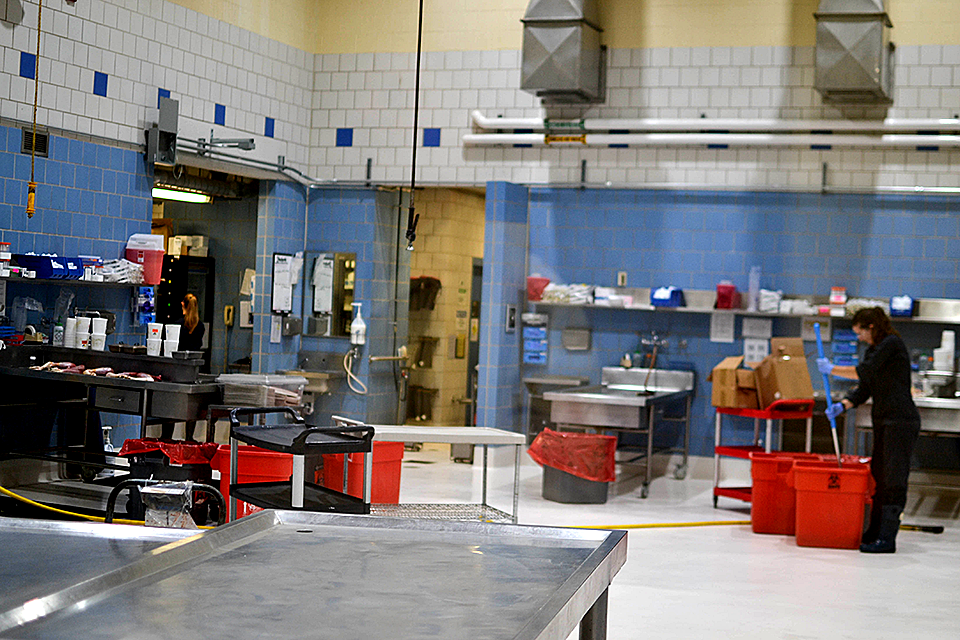 While the test can still take five or seven days, Schefers said, its most important feature is that it can test blood, soil, feces and more for prion contamination on a deer farm. A brain or lymph node sample from a dead deer isn’t necessary. That can immediately help state officials be proactive in monitoring cervid farms, Schefers said. Plus, Larsen said the U plans to modify the test to make it more sensitive and faster.

“We don’t really what know what the best antemortem sample is,” Schefers said. “But if I can go to a farm, test them all today and in two weeks tell them with confidence they’re all negative, I’m way ahead of the curve as far as determining whether they have CWD or not.”

Schefers said testing dead animals has not halted the march of CWD across the country. “We haven't slowed it down,” he said.