ATOP EAGLE MOUNTAIN — It was a recent Friday afternoon when Tami Stagman set out to summit the highest point in Minnesota.

Situated northwest of Grand Marais at 2,301 feet above sea level, Minnesota’s topographic apex is not very tall. It’s called Eagle Mountain, but “mountain” is generous. Though it’s certainly the tallest thing around, it would have to rise twice as high as its roughly 500 feet above the surrounding area to fit most geographers’ definition, technically. It’s more of a big hill.

Just ask Stagman, a Traverse City, Michigan resident who is part of the Highpointers Club, a group whose members summit the tallest parts of U.S. states. They earn pins for progress and hold an annual convention.

Though Eagle Mountain pales in comparison to Denali, Alaska’s summit (20,320 feet above sea level), Mount Whitney and Colorado’s Mount Elbert (14,433 feet), Minnesota’s highest natural feature rises higher above sea level than the IDS Center, the tallest manmade building in the state, and significantly taller than lots of other Minnesota landmarks.

Minnesota elevations, compared
At 2,301 feet above sea level, Eagle Mountain rises higher than IDS Center, the Foshay Tower, the Paul Bunyan statue in Bemidji, the First National Bank Building, the Jolly Green Giant in Blue Earth and Sylvia Fowles of the Minnesota Lynx (while standing at the elevation of the Target Center). The bars below indicate ground elevation above sea level.

Minnesota is what you might call vertically condensed. Its lowest point (Lake Superior, at 600 feet above sea level) is less than 15 miles from the 2,301-foot summit of Eagle Mountain, its highest point.

“The state is relatively flat. When you look at our state, the changes in elevation, the most change of course is about 1,700 feet. Total,” said Dan Ross, Minnesota’s chief geospatial information officer.

But how flat is Minnesota relative to other states?

Answering that question is complicated.

That’s something Jerome Dobson, a professor emeritus of geography at the University of Kansas, started thinking about a lot when he moved to the Sunflower State. “Every time I mentioned where I lived, in Kansas, people would say how flat it is,” he said.

But it didn’t seem that flat to Dobson, who points out the names of several of the state’s distinct regions explicitly express their non-horizontal characteristics, including the Smoky Hills, Flint Hills Uplands and Red Hills. “Everywhere I looked, I saw hills,” he said. “So I started, I would carry my GPS with me as I crossed East to West across Kansas and see how the elevation changed.”

All the time he’d spent driving across Kansas also got Dobson interested in measuring the relative flatness of states. The question became how to do it: subtracting the lowest elevation from the highest was too simple. For example, Kansas’ highest point is about 4,000 feet in the west, and around 500 feet in the East.

“If you took that subtraction, that wouldn’t tell you anything about the internal dynamics of what’s going on,” said Joshua Campbell, a geographic consultant and Dobson’s co-author.

The researchers ranked the lower 48 according to what percentage was in any of the flat categories. Neither Kansas nor Minnesota is the flattest, but they’re close. Florida takes the (pan)cake, which makes sense given how much of the state is at sea level or near it.

Minnesota is the fifth flattest state, with 47 percent of the state considered flat, flatter or flattest, and 53 percent not flat.

Flatness characteristics of states
States are listed in order of least to most non-flat. Click or tap the column headings to re-sort the table.
Source: Dobson and Campbell, “The Flatness of U.S. States.”

Minnesota is flat because much of it was leveled by glaciers. In the last Ice Age, ending about 12,000 years ago, glaciers rumbled down the state, flattening out the topography.

The flattest parts of the state follow a big arc that goes from the state’s north-central region to the Red River Valley down to the Minnesota River Valley. But the glaciers didn’t leave everything flat, Ross pointed out, showing a MinnPost reporter around an interactive topograpy map of the state. 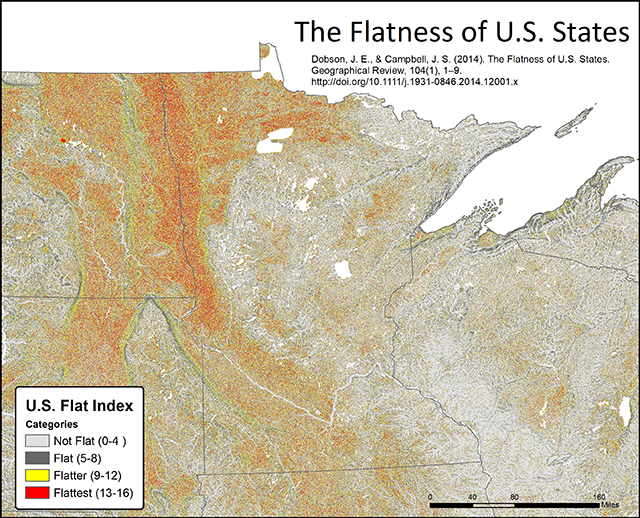 In Minnesota’s southwest corner, Buffalo Ridge, a big mass where the Missouri and Minnesota rivers’ watersheds diverge formed of a big deposit left by glaciers. It reaches elevations around 1,900 feet above sea level.

Parts of  northwestern Minnesota are characterized by volcanic rock, formed by lava during the Midcontinental Rift 1.1 billion years ago.

Escaping the glaciers’ crush was the Driftless Area, which spans Wisconsin, Iowa, Illinois and southeast Minnesota, which explains the topographic variation in places like Red Wing, where bluffs rise hundreds of feet above the Mississippi River.

To Stagman, exploring the country’s high points is as much about the journey as it is about bagging peaks. And Eagle Mountain, though modest, gave her a chance to check out northern Minnesota. She’d never been before, despite being from a neighboring state.

“You know what’s interesting is the adventure to get to the high point. Sometimes you’re on a little back road, you go through little tiny towns, you go places you wouldn’t otherwise go,” she said from the Eagle Mountain overlook, which, despite the landmark’s low elevation relative to other high points, offers a nice view of the surrounding lakes and greenery.

When it comes to exploring topography in real life, get off the highway, Dobson says.