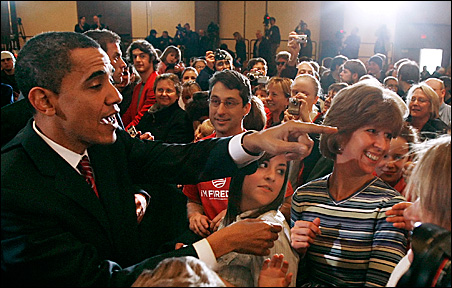 Tonight, it’s all eyes on Iowa. Tomorrow, as the candidates and the klieg lights shift focus to New Hampshire, there will be a few last days of backlash against the absurd idea that a handful of politically-obsessed citizens of one undersized, atypical farm state should have such an oversized role in the winnowing of the presidential field.

The condition that one might call Iowa Envy has already had a big impact on the caucus and primary schedule (without, one might note, dislodging Iowa from its first-in the-nation status, even if they did turn the caucuses into a New Year’s hangover party).

And anyway, unless you own a TV station, being Iowan during years divisible by four is not an unmixed blessing. The mixture of it was captured colorfully in a quote, obtained by my esteemed former Strib colleague Bob Von Sternberg earlier this year:

“It’s pretty cool they’re all coming through so early,” said Larry Reinsch, a metal fabricator and independent voter from Ames who has shadowed most of the candidates as they have cruised through central Iowa. “But you get tired after awhile. It’s like you have to pick them up and move them out of the way every once in awhile so you can mow your lawn.“

Iowa is indeed small and atypical. How small? With a population of 3 million, it ranks 30th among the states. (Minnesota, with 5.2 million, ranks 21st.) How atypical? Iowa is more agricultural and significantly less urbanized than the nation as a whole. On an ethnoracial basis, Iowa’s population is 91.5 percent non-Hispanic white, compared with 66.9 percent nationally.

So you could argue, in a moment of Iowa envy, that candidates with especially strong appeal to racial and ethnic minorities might not get a “fair” shake in Iowa. But it doesn’t seem to be stopping Barack Obama this year. And what state is such a perfect reflection of the nation as a whole that it deserves to serve as the quadrennial microcosm? (Minnesota, if you’re wondering, is 86.3 percent white.)

Considering that 48 states probably suffer some measure of Iowa/New Hampshire envy, it’s impressive that the special role of those states has lasted for 10 presidential cycles, and reform measures have gone basically nowhere.

Minnesota’s own Sen. Amy Klobuchar is a lead sponsor of a bill that would legislate a new system of regional primaries, like so:

“Sen. Klobuchar’s bill, which would take effect in 2012, is based on the rotating regional primary plan advocated by the National Association of Secretaries of State. The country would be divided into four regions. The states in one region would hold their primaries or caucuses on the first Tuesday at the beginning of March, and the other regions would follow on the first Tuesdays in April, May and June. In the next election cycle the order of the regions would rotate.”

That sounds like it would resolve the fairness issue, with two small exceptions. The Klobuchar bill preserves the right of Iowa and New Hampshire to go first, before the regional rotations begin.

Minnesota’s role in creating Iowa
A couple of famous Minnesotans had a hand in creating the situation that produces Iowa envy.

The disastrous nominating process of 1968 (tear gas and riots outside the Chicago Democratic convention and the nomination of a candidate — yes, Minnesota’s own Hubert Humphrey — who had not won ANY primaries) led to the creation of the so-called McGovern-Fraser Commission, which was assigned to transfer power over the nominating process from the party bosses to the people.

Yes, the Fraser who took over the leadership of the commission from Sen. George McGovern (of South Dakota) was Minnesota’s own Don Fraser, then a highly respected congressman, later the mayor of Minneapolis.

The McGovern-Fraser reforms made the systematic winning of delegates through public caucuses and primaries the only way to get nominated.

Iowans had, for many years, used a multi-stage process (similar to Minnesota’s) that started with local caucus meetings, but no one had paid much attention. To provide time for its many steps, Iowa Democrats moved the first stage of their caucus and convention process to late January. I have not seen anyone argue that this was an intentional decision to preempt the rest of the states — it just turned out that way.

And yes, our neighbor Sen. McGovern, who helped write the new rules, got the first “Iowa bump.” McGovern actually finished a fairly distant second (35.5 to 22.6 percent) in the 1972 Iowa caucuses behind then-frontrunner Sen. Ed Muskie of Maine (third, if you count “Uncommitted,” which actually beat Muskie). But McGovern’s campaign manager (a young rising star named Gary Hart, who had presidential ambitions of his own) was able to spin McGovern’s showing as exceeding expectations. McGovern went on to win the nomination (although he didn’t do well in the general election). In most tellings of the tale, this was the beginning of Iowa’s special role in presidential politics.

The neighbor syndrome
Because of our propinquity, politically-obsessed Minnesotans have an easy trip south on weekends to help their chosen candidates, and thousands of them take advantage of the opportunity every four years. I don’t know whether that increases our Iowa envy or relieves it.

Personally, as a member of the politically-obsessed class, the thing that used to bother me was not getting to see the TV ads. But now, thanks to the miracle of the Internet, I can see them all, and I can see them when I want to, without getting sick of them (and many Iowans surely must).

And so, of course, can you. As a final public service/New Year’s gift, here are some links that will enable you, if you feel so moved, to see what Iowans have been seeing (although many of these ads, especially by such non-Iowa focused candidates as John McCain and Rudy Giuliani, have been running elsewhere).

This link will get you an almost unending stream of TV spots by the Romney campaign, which has aired the most ads so far. You can stop it whenever you want. (You can sort of tell which ones are targeted at Iowa.)

This one will get you two for Huckabee, who hasn’t run very many. The first one, on taxes, is running in New Hampshire but previously aired in Iowa. You have to scroll down from the first one to get the second one, on abortion, which is currently running in Iowa.

This one has two 30-second messages approved by John McCain, then segues into some longer videos. But there’s a menu to the right of the screen that will enable you to call up more McCain ads, if you feel like it.

This one gets you a recent Hillary Clinton ad (with no voices, until the “I’ve approved this message” at the end), and it also gets you a menu on the right of the screen of many other videos, some of which are ads. The one called “Crossroads” is the very pricey two-minute piece that Clinton aired on all of the 6 p.m. Iowa newscasts Wednesday night.

I’m not clear on the rotation of Barack Obama’s ads. This one has been around for a while and is pretty close to Obama’s core message. It will also get you a menu of other Obama-related video, some of it ads, some not, and some of it from sources other than the Obama campaign.

John Edwards was the last of the major Dem candidates to start advertising on TV, but he has pumped out several ads during December. The complete catalogue is here. Click on any title to play the ad.