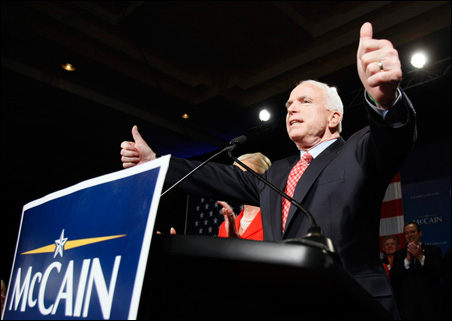 After six hours of following the Super Duper Tuesday returns and listening to the talking heads, I’ll just blurt my impressions, then come back and discuss them a little.

1. John McCain has about locked up the Republican nomination. All he has to do is avoid a meltdown and run the clock. For some reason, this is a forbidden thought.

2. Neither Hillary Rodham Clinton nor Barack Obama gained any significant ground at the other’s expense. It’s all about the delegates now, not the momentum. They’re still counting, and the formula for awarding delegates is complicated. Clinton went into Tuesday with a small lead in delegates. As as the counting proceeded Wednesday, Obama’s campaign manager claimed that Obama had pulled ahead in delegates. Independent news agencies showed Clinton still with a small lead. Clinton advisers said when the counting is done, the two candidates would be separated by no more than five or six delegates in the race so far.

3. The more polls you read, the more clear it is that they can’t tell you what’s gonna happen.

4. Who’da thunk this: You can carry the white vote and the black vote and still lose by a wide margin.

5. If you listen to CNN, Fox and the broadcast networks long enough, they’ll say everything that’s sayable and then keep on talking. Some of it will be insightful. Plenty of it will be the sound of two gums flapping. But they sure have some cool new gadgets for displaying and analyzing results.

OK, back to the top:

Point No. 1
On CNN especially, the gang went to some lengths to avoid stating the obvious:

McCain had a huge dominant night, swept the four biggest states, won all the winner-take-all states (which is about five or 10 times more valuable than winning the proportional states; doesn’t it seem like there’s something wrong with that winner-take-all rule?), has more than 60 percent of all the delegates that have been locked up so far, almost three times as many as his nearest rival Mitt Romney (who has no apparent path to the comeback trail), demonstrated strength in every region of the country and has the Repub nomination in the bag.

At 10:11 p.m. Central time, after several members of the “Best Political Team on Television” had taken turns saying that the clearest thing you could say is that the race isn’t over on either side, analyst Jeffrey Toobin summoned the nerve to say that he disagreed: “I think it’s over. The math isn’t there for any of these other candidates. They cannot catch.” First he was mildly rebuked and gently mocked for uttering this forbidden truth. Before I turned them off at 1 a.m., most of his teammates had conceded the point, but none so clearly as that.

And at 1 a.m., USA Today updated a story headlined “Despite big win, McCain isn’t home free.” It makes no suggestion of how McCain could lose the nomination, but quickly pivots to the currently fashionable story line about how important it is from him to appease more orthodox conservatives who don’t like him.

Point No. 2
Early in the evening, when Clinton locked up the northeast except for Connecticut, which was too close to call, it looked like the story of the night was going to be a big Obama fizzle. But before long Obama did win Connecticut (a small state, but it broke Clinton’s regional hegemony, for whatever that’s worth), Clinton ended up with the biggest prize (California) and four of the five most delegate-rich states up for grabs. But Obama ended up with five of the top 10, and won 12 out of 21 that were decided as of this writing (New Mexico is still too close to call, which means it hardly matters at this point who wins it, with the Dem’s proportional rules.)

Dems will be counting and apportioning delegates for a while yet today. As of 2:30 p.m., the running tally on CNN.com had Clinton ahead in the overall delegate hunt by 818 to 730. AP had it 845 to 765. But as I mentioned above, the Obama people claim the final numbers would look much better for him, and the Clinton people agree that it will be very close.  The calendar for the balance of February looks favorable to Obama, at least to my eyes. (Here’s the list for the balance of February, in chronological order: Washington state, Nebraska, Louisiana, Maine, Virginia, Maryland, D.C., Wisconsin and Hawaii.) If I were a football analyst I believe my line would be: This is starting to look like one of those games that will be won by whichever team has the ball at the end.

Some of the talkmeisters are still fond of an analysis that depends on momentum. I’ll buy that on the Repub side (and McCain has the big mo). But the Dem race so far has defied, nay repudiated, the momentum analysis. Whoever gets it, loses it on the next round. From now, forget the momentum, keep counting the delegates, and remember that on the Dem side, the arcane rules make it dangerous to project from vote totals to delegate totals. We’d also better start keeping a close eye on the super delegates. It’s not crazy to think that they will end up holding the balance. They can commit at any time on any basis they choose and many may go to the convention uncommitted. If it gets incredibly close, John Edwards also has 26 delegates.

Point No. 3
I know I’d be a better person if I could break this habit, but I can’t stop studying polls. And I know they’re not predictions, only snapshots, and that by the time you take the margin of error into account, they all overlap. (In every state other than the real blowouts like New York and Illinois, if you looked at the five or six most recent polls heading into Tuesday, they were almost evenly divided between Clinton leads and Obama leads, often in the same state taken on the same days.)

But the one thing that seemed most clear for the past five days was that things were moving toward Obama. I think I heard every pundit agree that the only thing that might save Clinton was that Super Tuesday wasn’t a week later, because he was gaining so fast. So I was surprised to hear Bill Schneider and Soledad O’Brien report on CNN that, according to the exit polls, Clinton had won among late deciders.

Point No. 4
Speaking of the exit polls, Obama and Clinton keep trying to tell us their contest isn’t about race or gender, and we’d really like to believe that, wouldn’t we? Of course Obama won big among blacks (82 percent) and Clinton dominated among women (I don’t have an overall figure, but in some states it was almost 60 percent). Still, Obama did carry 40 percent of whites, a higher portion than he has received so far. And according to Soledad and Bill, he actually won the overall white vote in California (49-43 percent, with the rest going to John Edwards) while racking up 81 percent of the black California vote. But Clinton still managed to beat Obama rather soundly statewide.

So how do you carry the white and black vote and lose the state by 14 percentage points? In the melting pot that is California, 29 percent of all Democratic voters Tuesday were Hispanic and Clinton carried them by an impressive 66-33; and another 8 percent were Asian, a group that Clinton carried by an even more impressive 73-25. I read a lot over recent days about the inroads Obama was making into Clinton’s strength among Hispanics. Not in California.

Point No. 5
So, where are we on the issue of spin and the efforts by all campaigns to play the expectation game? The Clintons are known to be masters, and I thought I had detected a certain rebellion against it by the press corps. I heard CNN’s Obama reporter say early in the evening that he had been told Team Obama would consider the night a success if they ended within 100 delegates of Clinton. That’s about where they ended, but personally, I don’t see how that can be considered a victory.

But as I switched channels late in the evening, I came upon the middle of a weird speedrap by Fox’s Clinton reporter, Major Garrett, in which he passed along the spin in such detail without expressing any skepticism about it that it took my breath away. His Clinton inside sources had told him “that looking at the early exit polls, they thought they were gonna be in for a very, very long night.” But, as things played out, they discovered that they had greatly exceeded expectations and actually met all of their goals. The riff went like this:

“They understand that Barack Obama has done well in certain key segments, but they also believe they won the most important races on their map. New Jersey, Massachusetts, and they believe will win Arizona, Missouri and California. [None of those states had been called yet. They ended up being wrong about Missouri.] Those are all the states they were most interested in winning. So the narrative for the Clinton campaign is this: Whatever the delegate totals are at the end of the night, Hillary Clinton took on the Obama charge, saw that surge coming and on the ground game, tactically prevailed in the places they needed to prevail… [so the important thing about this is that it will enable them to tell the super delegates], ‘We’re still the frontrunner. Get on the Hillary Clinton bandwagon…’ So, yes, they had a good night; it could have been much worse. The goodness of this night is framed by how bad they thought it might be three or four hours ago.”

Karl Rove, by the way, made his debut as a Fox analyst. He kept calculating delegates and turnout on scrap paper. He worried aloud about the implications of the turnout comparison, which favored the Dems by about 2-1. He said that Dem turnout was higher than the Repub turnout in every state except Utah and Georgia.

On GOP side, it’s McCain; for Dems, it’s halftime