Looking past this week’s Wisconsin primary and Hawaii caucuses, the big March 4 contests in Ohio (161 Dem delegates at stake) and Texas (228!) are, by universal agreement, the next big events in the Clinton-Obama contest. Sen. Hillary Rodham Clinton supposedly starts with big advantages in both states, and her team has described these as the “firewall” at which they will stop the spreading Obama conflagration. And they might — but the deeper I look into the complicated rules and demographics of Texas, the more unsure I am.

In the total voting-age population of Texas, Hispanics outnumber blacks by slightly more than 3-1. Based on what the primaries and caucuses have told us so far about the electoral strengths and weaknesses of the leading Dem presidential candidates, that sounds at first glance like a recipe for a Clinton lock in the third-biggest state, Dem-delegate-wise.

But a great many things in this contest have not gone according to first glance. Follow me into the bowels of the numbers for a look at why Clinton’s Lone Star advantages may not be as impressive as they first appear.

According to this helpful table prepared by the William C. Vasquez Institute, which specializes in the study of Latino voting, most of the 3-1 margin disappears as you move from total population to actual voters.

So, by the time you get to the actual participants in the 2004 election, the more than 3-1 predominance of Hispanic voters over blacks in Texas has shrunk to less than 2-1 (Hispanics made up 19 percent of the Texas electorate in 2004, compared to 12 percent for blacks). Do you feel a good bit of Clinton’s potential advantage ebbing away?

But wait. I’m not done tormenting you with numbers. Now we get to the part about the complicated (and one might say crazy) rules that Democrats are using to choose delegates. They vary wildly from states to state, and Texas has possibly the craziest one yet.

Sixty-seven more of Texas’ Dem delegates will be allocated according to the caucuses. It works like Iowa (and the way Minnesota used to work), where the precinct caucuses elect delegates to the next level and then to the next; finally, the Texas Democratic State Convention will choose those 67 delegates. Although there is no guarantee, the presidential preference of those delegates should reflect the preferences of the March 4 caucus attendees. As you know by now, Team Obama has specialized in kicking butt in caucus states all year.

So Clinton’s big gains in Texas may have to come mostly from among the 126 primary-chosen delegates.

Parceled by Senate districts
But wait. You haven’t heard how that works yet. None of those delegates will be based on the statewide vote. All 126 delegates have been parceled out to the 31 Texas State Senate districts, and the districts are not equal. Each Senate district gets between two and seven delegates, based on Democratic turnout in recent elections. And it turns out that Democratic turnout in the predominantly Latino region around Brownsville and near the Mexican border have not been such bastions of Dem turnout in the past as some of the heavily black districts in Dallas and Houston. Why is that? Not only do blacks in Texas have higher registration and turnout rates than do Hispanics, but black Texans also are almost more reliably Democratic in their voting patterns than are Hispanic Texans.

The upshot of this last analysis is this: The delegates are allocated to the former Dem strongholds, which are more likely to be black than Hispanic districts. Perhaps Clinton can produce a record-breaking turnout among Texas Hispanics, as she did in California, and can carry a large portion of that vote. Perhaps she can attract a lot of Hispanics who usually vote for Republicans to come into the Democratic primary for her, especially since the Republican race is closer to being settled. But it can only do her so much good, if the turnout is occurring in districts that don’t have many delegates to award because they have not been Dem strongholds in the past.

By the time you get to vote age Texans who are citizens, who are registered, who turn out and who voted for the Democratic ticket in 2004, the black and Hispanic vote are roughly equal. 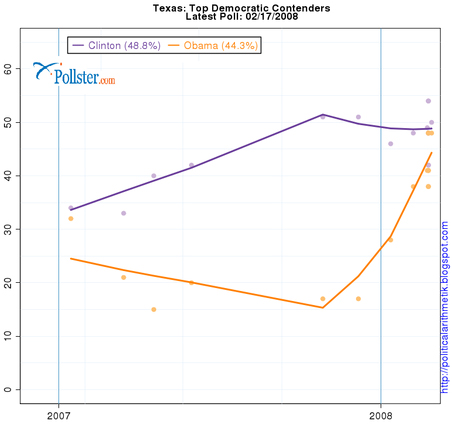 Pollster.com tries to filter out the statistical noise from the cascade of polls and find the overall trend. In this graphic, Pollster plotted 13 polls going back a year on the  Texas primary matchup between Obama and Clinton. According to their methodology, the trend line has never shown Obama ahead, but has shown Clinton’s once-commanding lead of more than 30 percentage points to have shrunk steadily to its current 4.5 percentage points.

Because of the procedural vagaries I’ve just described, Clinton would probably have to win Texas by a lot more than that to come away with any significant gain in the delegate count.

RealClearPolitics, which uses a simpler method of averaging the five most recent polls, shows Clinton leading by 7.6 percentage points.