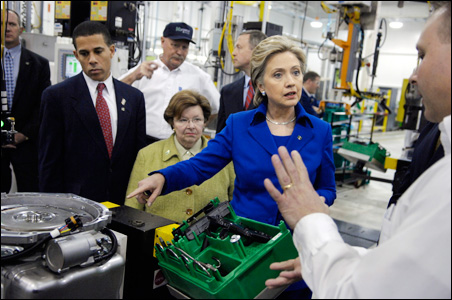 After sweeping three caucuses and one primary over the weekend, Barack Obama has pulled into a minuscule lead in the overall delegate race – even counting the superdelegates, according to the count maintained by the estimable Real Clear Politics.

Other delegate counters don’t agree. The New York Times, which has the most cautious delegate-counting system, has Hillary Rodham Clinton still leading, even without her superiority among the superdelegates. The Associated Press and CNN, to mention two more, have Clinton clinging to a slight lead in the overall count, but show Obama well-ahead among the un-super delegates – those who are deemed to be pledged to a candidate based directly on primary and caucus results.

Here are the tallies, as of Tuesday morning:

New York Times: Clinton 1,043; Obama 921. (The Times, by the way, recognizing that their method puts them further out of synch with the others, also displays an updated AP count alongside their own.)

Everyone shows Obama gaining ground recently, and Obama is expected to sweep the today’s primaries in Maryland, Virginia and the District of Columbia. This could put him ahead on more of the scorecards, although not necessarily the Times’.

The Clinton campaign is unofficially conceding as much, trying to lower expectations and direct our attention to March 4, when Clintonites hope to make up some lost ground by winning in Texas and Ohio (respectively the third- and sixth-biggest states in Democratic delegate totals).

Different rules in each state
The wobbliness of the delegate counts is maddening. It’s now clear that the nomination will come down to a state-by-state and superdelegate-by-superdelegate slog. So it would be nice to at least have a count on which we could rely, but we don’t.

Several reasons for that. On the Dem side, every state has a different set of rules for awarding delegates, but as a nationwide party rule, none of the Dem contests are winner-take-all (which would make the scorekeeping easier). Each state has delegate positions divided between the statewide showing of the candidates in the primary or caucus, the congressional-district-by-district showing, and the superdelegates.

Superdelegates, for the uninitiated, are a group of 796 Democratic office holders (like governors and members of Congress), party officials (like state party chairs and co-chairs and Democratic National Committee members) and distinguished party figures (in Minnesota, this is Walter Mondale) who are automatically given delegate positions and who can support any presidential they choose, on any basis they choose, at any time they choose.

Dem National Chair Howard Dean, in case you missed, said a few days ago that it would be bad for everyone if the race drags on until the August convention, so if there isn’t a clear winner by April or May, there may have to be some kind of “arrangement” worked out, whatever the heck that means, but it sounds kinda creepy.

The various media organizations scoring the race are themselves canvassing the superdelegates to find out if they have decided whom to support (and remember, they are allowed to change their minds). As of Tuesday morning, all of the scoresheets I’m following showed Clinton leading among superdelegates, by the following amounts:

“I will not go through the summer, I can tell you that, without endorsing a candidate…I am not a big believer in smoke-filled rooms.”

The unsuper delegate apportionments are also not so easy to figure out, which is another reason the scoresheets don’t match up.

The Times differs the most from the others because it won’t count delegates until it considers them bound to a candidate. In many caucus states, the results of the precinct caucuses only start a process of delegate selection that doesn’t culminate until the state convention months later. In Iowa, for example, the results released on caucus night are only estimates of how the delegate count will turn out after the local delegates choose the county delegates who choose the state delegates, or some combination along those lines.

The Times figures nothing is for certain until the state conventions, which is true. So it lists most caucus states as having chosen no delegates yet. This has a certain logical purity, by also results in significantly undercounting Obama’s standing, since he has won almost every caucus state so far.

Faced with similar circumstances, Real Clear Politics goes with the estimates issued by the state party, which is one reason that their score sheet is so much more favorable to Obama.

In the case of Minnesota, the Times has a mixed attitude. Minnesota has 88 delegates, of whom 16 are “supers,” and 72 are – what? – mortal? Not susceptible to Kryptonite? Anyway, the 72 are pledged delegates who presidential preference is based on the result of the binding Feb. 5 ballot taken at the beginning of the Democratic caucuses.

Real Clear and CNN are counting all 72 pledged Minnesota delegates, by 48-24 in favor of Obama.