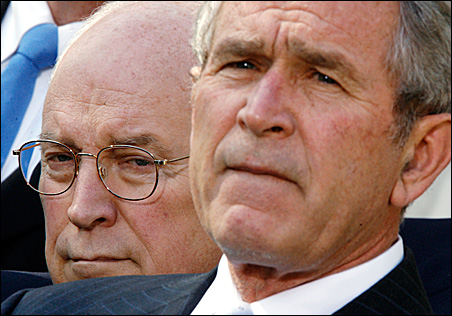 REUTERS/Kevin Lamarque
Vice President Dick Cheney listens over the shoulder of President Bush as the president speaks to reporters in the Rose Garden.
Former Vice President Walter Mondale’s presentation at the Humphrey Institute on the vice presidency

Former Vice President Walter Mondale today accused the current vice president, Dick Cheney, of a wholesale assault on the Constitution, the balance of powers, and the system that evolved since World War II to coordinate intelligence and defense policy.

“They wrecked that system,” Mondale said this morning at a University of Minnesota scholarly conference on the vice presidency.

This isn’t some academic difference of opinion over the proper balance between branches of the federal government, Mondale said, during a question and answer session after his prepared remarks:

“I think this was a brutal, deliberate policy to ignore a wide range of written laws and constitutional principles and the legitimate powers of Congress…It’s different than anything we’ve seen in American history and I think it ought to be seen not as two responsible positions, but ought to be seen as a dramatic challenge to American’s system of government.”

In the case that led to the conviction of Cheney’s top aide, Lewis “Scooter” Libby, Mondale said Cheney functioned as “an ideological enforcer, silencing dissent, punishing critics, to sustain a flawed war policy based on cooked facts. It’s all there. Read the case.”

Mondale challenged an occasional theme that arises in interpreting the Cheney vice presidency, holding that because Cheney had no presidential ambitions of his own, he was more useful and faithful to the president. On the contrary, Mondale argued, this freedom from higher political ambition freed Cheney to disrespect the Congress, the American people and the law.

Mondale said: “The other morning, Mr. Cheney was on ‘Good Morning America.’ A reporter asked him: ‘Well, polls now show that two thirds of the American people are opposed to this war. Shouldn’t that mean something?’ And [Cheney] said, ‘So?’

“I think our vice president ought to wake up every morning, like I did, wondering what he can do to enhance public support and respect. And I believe an election-free unaccountable vice president, clothed with some of the aura and power of the president may, as this vice president has, act as though he were beyond accountability to anybody but the president — beyond the reach of the Congress, the court, the press, the Constitution and the American people.

“It scares me and I think we ought to be thinking about it this fall as we pick a vice president.”

In a blistering close to his 30-minute presentation at the Humphrey Institute for Public Policy, Mondale said that in looking back on his tenure as Jimmy Carter’s vice president, he took pride in three claims: “We told the truth; we obeyed the law; and we kept the peace.” The Bush-Cheney administration, Mondale said, “can’t say any of that with a straight face about those first four years. And it’s cost us terribly. Let’s not make that mistake again.”

Scholars views on Mondale, Cheney
It’s not surprising that Mondale feels this way, and he has criticized Cheney publicly before. The event, sponsored by the Humphrey Institute’s Center for the Study of Politics and Governance (CSPG) and the journal Presidential Studies Quarterly, was supposed to be about the upcoming choice of running-mates for the 2008. And the other scholars and former public officials who spoke devoted most of their remarks to the assigned theme.

But Mondale clearly decided to seize the occasion to go further, deeper and stronger than ever before into what must be described as his disgust with the way Cheney used the office that Mondale once held.

Mondale may have special standing on the topic. Scholars of the vice presidency are unanimous that he was a breakthrough figure in turning the office into an important part of the executive branch, based on an understanding that he reached with Carter. The same scholars agree that Cheney now holds the title of most powerful vice president ever. Mondale said he wasn’t sure whether Cheney had Bush’s agreement for some of the policies he pursued, or whether he had turned the vice presidency into an independent power center, a possibility that Mondale clearly thinks would be far outside the Constitution.

Mondale said his criticisms of Cheney had nothing to do with policy differences. He had no fundamental objections to the way other vice presidents have worked. While fielding questions from the audience and from Larry Jacobs, director of the CSPG, Mondale reiterated the criticisms he had made in his prepared remarks.

When Jacobs asked what the administration could do about the problem, Mondale replied: “It’s not that difficult. If you’re doing something that’s against the law, stop it…We never thought we had the right to ignore laws that were clearly applicable to the president.”

Although Mondale’s strong word choices about what he sees as Cheney’s abuses of power were consistent with many arguments made by those who argue for an impeachment drive against Cheney and/or Bush, Mondale explicitly rejected the idea, saying impeachment “just tears us apart — wouldn’t get anywhere.”

The second audio link below contains the question and answer session. Warning, it’s about 30 minutes long and includes not only an expansion of Mondale’s criticisms of Cheney and Bush, but also questions about likely running mates for this year’s presidential nominees and other topics.

A Q&A with Mondale at the Humphrey Institute (33 minutes)