An utterly misleading statistic has been spreading virally in the Minnesota news media and on the floor of the Legislature.

The correct statistic, which is wonderful news for Minnesota teens and their parents, is this:
Teens in Minnesota are substantially less likely to die in car crashes than are teens nationally.

If you haven’t been following the news, this may not be a big surprise. Minnesotans expect to rank well among the states in such categories. But if you have been reading the news, my good news fact may take you by surprise. You have been bombarded with prominent stories from both metro dailies (I haven’t checked MPR or the TV news, but I suspect it’s there too) asserting as an unchallenged and established fact that Minnesota has the highest teen fatality rate from motor vehicle crashes in the nation.

Stats in the papers
But in the past week, flat statements to the effect that Minnesota has the highest teen fatality rate have appeared at least six times (seven times if you count twice in one story) in the two metro dailies.

On Thursday, front page stories in the Strib and the Pi-Press stated flatly that Minnesota has the highest teen driving death rate in the nation. They appeared in stories about debate in the Minnesota House over a proposal to put new restrictions on the hours and passenger loads of teen drivers.

(The bill passed the House Thursday and, by the way, nothing in this piece should be taken as an argument against the bill. I have a daughter, the last best hope for the future of humanity, who is currently on her learner’s permit. She is a good driver and getting better. But I would gladly support a law requiring all other Minnesota drivers to get off the roads whenever she is on them.) 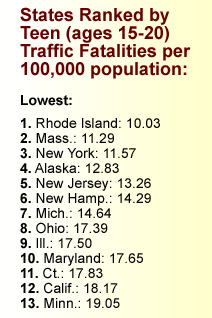 After the Strib said it (“highest teen driving death rate in the country”) in the first sentence of its story as a flat statement without attribution, state Rep. Kim Norton of Rochester, the House sponsor of the proposed new teen driving restrictions, said it (“number one in teen deaths”) in the second paragraph. Strib editor Nancy Barnes cited it (“Minnesota had the highest teen death rate in the country related to automobile accidents”) again in a Sunday Op-Ex piece defending the paper against complaints that the front page isn’t newsy enough anymore. (And by the way, Nancy, I’ve noticed some newsier front pages lately. Please keep it up.) 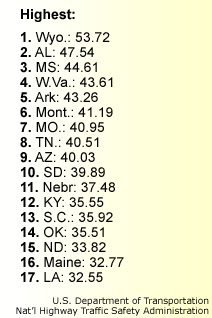 The Strib editorial page weighed in on Monday (“The state has one of the nation’s highest percentages of fatal crashes involving teen drivers”). I note that the editorial writer has demoted Minnesota to only “one … of the highest percentages,” but this is also incorrect, except in a very technical sense. See below.

State Sen. Steve Murphy said it (“We have the highest teen death rate of anyplace in the United States”) on the Senate floor on Monday and in Pioneer Press and the Strib on Tuesday. (Murphy, chairman of the Transportation Committee, is the Senate sponsor of the new restrictions.)

The meaningful stat
OK, are you ready for actual numbers on how Minnesota teen traffic deaths compare with other states and the national average?

So, how could Minnesota have the highest teen driving death rate in the country? Well, not in any meaningful sense. But there is a way of calculating a number that makes it appear so. I warn you, the next few paragraphs may be tough sledding.

Back in February, the Strib ran a story, and a front page chart titled “A dismal ranking.” I can’t prove it, but I believe the publication of this table was the moment when the misleading “fact” was injected into Minnesota discourse. (Who says newspapers don’t have any influence anymore?)

According to “A dismal ranking,” “Minnesota led the nation in the percentage of fatal crashes involving teen drivers from 2004-2006.”

Minnesota’s roads and highways are, blessedly and thankfully but not too surprisingly, among the safest in the nation. If you use the proper way of measuring highway death rates (number of fatalities as a percent of population), Minnesota (9.56 deaths per 100,000 of population) is the sixth safest of states. This is not the teen rate, but the overall rate.

In Minnesota (and, I feel confident, in most if not all states) teens are involved in more traffic fatalities than other age groups. But because Minnesota has one of the lowest overall rates of traffic fatalities, Minnesota’s teen deaths loom large only if you compare them to the low death rate among Minnesota’s non-teens. (I warned you about these next few paragraphs.)

Does this help?
Try this analogy. Suppose I told you that Twins slugger Justin Morneau had a higher rate of home-runs over the past two seasons than Alex Rodriguez of the accursed Yankees.

We look it up and find that A-Rod hit 89 homers over the last two years, compared with 65 for Morneau. Maybe so, sez I, but Morneau has the higher rate.

Oh, sez you, so you mean like number of homers per time at bat? Yes that might actually be a better way to rank home run hitters, since it takes into account how many opportunities each hitter had to go yard (that’s baseballese for hitting a home run). But it turns out that in 2006-07, A-Rod hit a homer, on average, every 13 at bats, compared with one every 18 at bats for Morneau. So if it’s rate of home runs you want, Rodriguez wins by even more.

Maybe so, sez I, but Morneau hit 25 percent of all the Twins home runs in those years. A-Rod hit only 22 percent of Yankee home runs. So Morneau had a higher rate.

But wait, sez you, that’s just because the rest of the Twins don’t hit as many home runs as the rest of the Yankees. That has nothing to do with which hitter is more likely, based on past performance, to jack one (also baseballese) each time he comes to the plate.

Morneau has a higher home run rate than Rodriguez in exactly the same way Minnesota has a higher rate of teen highway deaths than Wyoming. 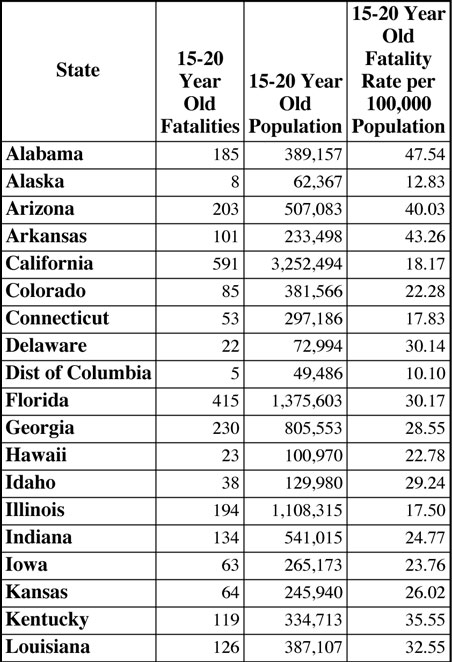 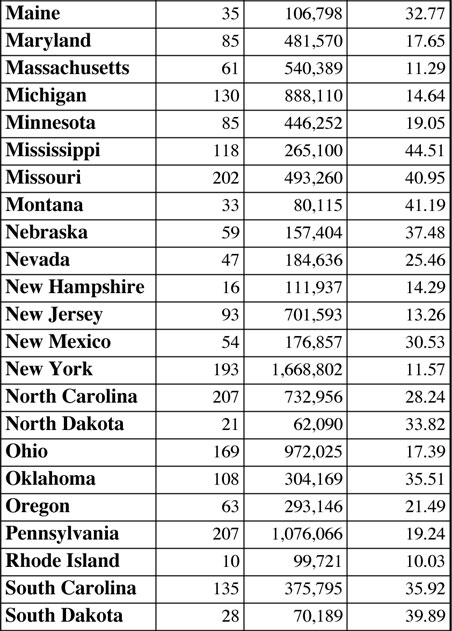 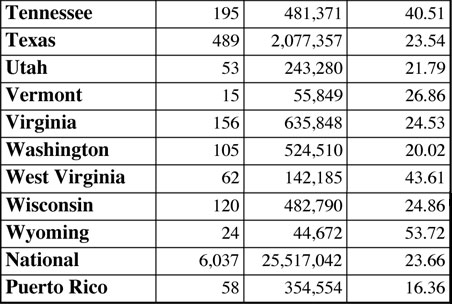 How you’ve been misled on teen driving fatalities