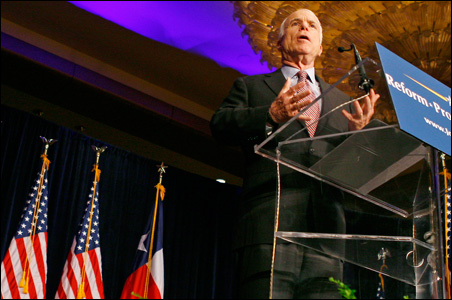 Senator McCain. Welcome to Minnesota. Thank you for your service. My question is about the occupation of Iraq.

I agree that some Democrats have tried to have a little too much fun with your “100 years in Iraq” quote a while back. I take you at your word that you didn’t mean 100 more years resembling the last five — 100 years of steady U.S. casualties. In explaining what you really meant, you have said that it would be fine with you if U.S. troops had a long-term presence in Iraq, like the troops have had in Germany, Japan and Korea.

Many Americans may think that sounds fine. I’m not so sure. No other country has huge military installations around the world. It’s not only expensive, but it smacks of imperialism. Ask yourself how the U.S. — specifically the McCain administration — would view it if another powerful country — let’s say China for the sake of illustration — toppled the government of our neighbors — let’s say Mexico, and said that one of its goals was to leave behind a Mexican government that would be an ally of China. Let’s say China did install a Mexican government friendly to China and then reached a deal with its puppet government for a permanent military base close to our borders in order to protect what China declared to be its “vital interests” in the Americas. And then let’s say China announced that it would be fine if the bases were there for 100 years. My hunch is, the McCain administration wouldn’t like it, wouldn’t tolerate it, would view it as a threat and an act of aggression against the United States and a statement of China’s intent to dominate our hemisphere. Please correct me if I’m wrong about that.

Of course, the USA is not just any country. We are the world’s only superpower. How we use that position is essential to how the rest of the world views us as we try to repair some of the damage that President Bush — and the Iraq misadventure — have done to the our image in the world.

(I know you don’t think it is has been a misadventure. That is a deep, serious difference I have with you, and I will gladly ask you about that another day. But for the sake of efficiency, let’s confine ourselves to where we go from here in Iraq and especially the idea of 100-year bases.)

I know I’m making more assertions than posing questions here, but the question is: If, as you hope, U.S. troops will be in Iraq for 100 years, what will that do to the perception that the U.S. seeks to dominate Middle East? Given the widespread dislike in Iraq and in the Arab world for the U.S. occupation of Iraq, what would the 100-year bases do to the standing — among its own people and among its neighbors — of an Iraqi government that would reach such a long-term basing deal? Are you concerned about that?

Forgive me for running on, but there’s a second aspect of your “100 years” remark and your subsequent explanations of it that I would like to ask you about.

It’s wonderful that the level of violence in Iraq has fallen over recent months. But more than 200 U.S. troops, and a much larger number of Iraqis, have been killed in the less than half-year of 2008 so far.

I suspect we may disagree, but I believe that there is no likely benefit to ordinary Americans of the invasion and occupation of Iraq that will outweigh the costs already incurred.

Those costs are already incurred and we can’t get them back. But decisions about war, including the future policy in Iraq, cannot and should not be shielded from the logic of cost/benefit analysis.

Your stay-until-victory policy (we’ll leave for another day the question of how, precisely, to describe and define “victory”), will impose more costs, new costs, in blood and treasure — costs that have implications for America’s ability to deal with military situations elsewhere, and costs that divert U.S. resources from other priorities, including domestic priorities and including reducing the shameful debt burden that we are every day imposing on our children (about which you say you care a good deal).

So my question to you is what might those additional costs be, in lives lost and lives shattered and dollars extracted from U.S. taxpayers and damage to the U.S. reputation in the world, before the situation of the U.S. military in Iraq resembles the situation in Germany?

You can, of course, easily reply that there are never any guarantees in war except that it will be bloody and awful. I agree. It’s one reason we should not get into unnecessary wars. But seriously, given the entire regional and historical context in which Iraq sits, what is your level of confidence — and how can you convince skeptical listeners to share your confidence — that the situation of U.S. troops in Iraq will resemble the situation in Germany within 20 years? Or, I  don’t know, why not make it 100?

My question for John McCain