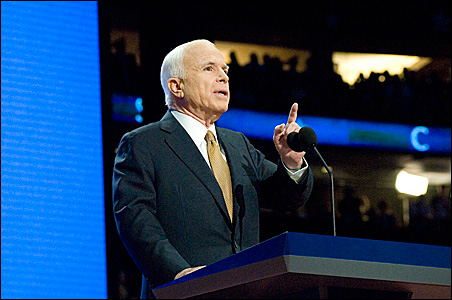 In general, I found John McCain’s speech last night likeable but kinda lame. But one thing made made me sit up straight with alarm.

McCain listed three “threats to peace and liberty in our time” that we must “see clearly and face”: al-Qaida, Iran and Russia.

What is Russia doing on that list? Although he tried to soften it (“I will work to establish good relations with Russia”), putting Russia in his own axis of evil list is not a good start to establishing those good relations. For me, it underscores a sense that McCain will be too quick to draw bright lines, backed by military force, and risk getting us into difficult fights. You may have read that in the aftermath of 9/11, McCain was talking publicly about the need to go after Iraq even before President Bush was. On Sept. 12, he started talking about other countries that would have to be attacked, beyond Afghanistan, and within a month said on CNN: “Very obviously Iraq is the first country.”

OK, just needed to get that off my chest. Because otherwise, I thought the speech ranked high for calm, civility. He paid tribute to Barack Obama’s historic accomplishment, made no personal attacks and went light on the policy attacks.

He also threw in a bit more specific policy ideas, especially on taxes and education, than the pundits were predicting. And I thought it was cool when he directly addressed voters who haven’t made their minds up yet, and promised to earn their trust. But anyone can say that (and should).

Frankly, if he really wants to fight for the “change” vote, he has to do more than point out differences with Obama. He has to point out differences from Bush. He doesn’t have to trash the guy (like Bush and his minions trashed him in 2000). But it’s Bushism that the public wants to change away from. And the fact remains that on most of the major policy issues, McCain has policies similar to Bush’s.

I realize that I’m being annoyingly logical or substantive. Apparently we’re supposed to take the combination of McCain’s long-standing aversion to earmark spending (on which I agree with him, but it’s too small a matter to make the change thing work), and his surprising choice of a female running-mate as evidence that McCain is a change guy too.

Former Minnesota congressman-now lobbyist Vin Weber, in a panel I attended during the convention, made the case that McCain has to compete for the change vote by setting up a contrast between Obama’s agenda of liberal change and his own ideas for conservative change. But when I asked Weber, a Republican, to describe the policies on which McCain could claim to represent change from Bushism, he said that would be “tricky.” I agree.

Favorite lines
McCain’s personal tale of heroic suffering as a prisoner in Vietnamese camp is very honorable. I especially liked the relatively humble version of it that he told in this speech. And I know that his team is counting on his biography to compensate for the issues on which he holds unpopular Bushy positions. But the P.O.W. tale was told so many times this week that it began to lose impact.

McCain is not a spellbinding orator and he stumbled quite a few times reading this speech off the teleprompter. It’s easy to see why his team tries to disparage the importance of this skill, which is one of Obama’s strengths. But by his own (brilliant or crazy? The jury is still out) choice of Gov. Palin and her triumphant speech of Wednesday evening, McCain created yet another comparison against which his oratorical style suffered.

There wasn’t much poetry, but here were a few of my favorite lines from the speech:

“All you ever asked of government is to stand on your side, not in your way.”

“In the end, it matters less that you can fight. What you fight for is the real test.” (There may be a little logic problem on that one, but I like the way it sounds.)