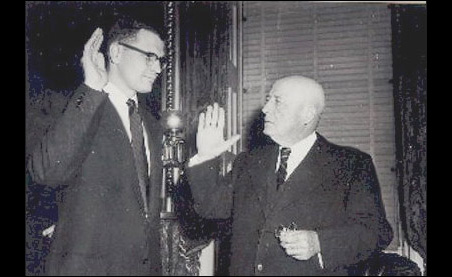 Courtesy of the United States Federal Government
Rep. John Dingell being sworn in by Speaker of the House Sam Rayburn in 1955.

This should drive supporters of term limits nuts.

Barack Obama is the 11th president to serve since John Dingell took office. (Go ahead, name the other 10 if you’re feeling feisty.)

This does not make Dingell even the longest-serving member of Congress at the moment. That would be Sen. Robert Byrd (D-W.Va.), who started in the House in 1953, then moved seamlessly into the Senate in 1959, where is now in his 9th term. Byrd is the longest-serving senator ever but, believe it or not, doesn’t (yet) hold the record for longest continuous service in the Congress. Carl Hayden (D-Ariz.) who also moved from the House the Senate and stayed for 56 years, 10 months and 28 days.  Byrd will surpass him this year, if the dam don’t break and the creek don’t rise.

Dingell is part of a team that holds an even more astonishing longevity record. I mentioned that he won a special election to start his House service in 1955. That was to fill the unexpired portion of his father, John Dingell Sr., who died in the middle of his 12th term in 1955. Dingell senior was first elected in 1932. So, between them, the Dingells have held that seat for 76 years and counting. 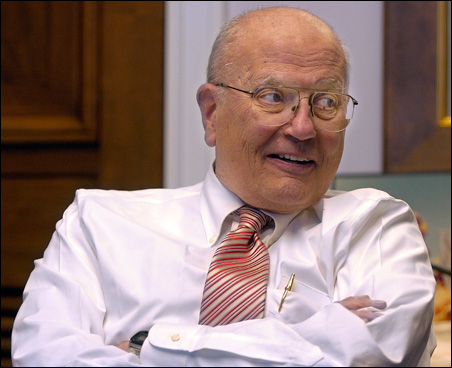 Dingell Jr. is 82 years old and has not announced his future political plans. Both his wife, Debbie Dingell, a General Motors executive, (she’s 28 years younger than him) and his son, Christopher Dingell, a former state Senator and now a judge, (he’s just three years younger than his stepmother) have been rumored as possiblities to keep the family streak alive when John Jr. retires. The most recent quote I can find on the topic from the congressman indicates that he doesn’t think his son wants the job, and that the family doesn’t own the seat, but that either his wife or his son would make an excellent U.S. Representative.

If you’d like to read the statement Rep. Dingell made yesterday, when he was honored for his record, it’s here.

Last cool detail: John Dingell Sr., in his first term in 1933, introduced a bill to create a national health insurance system that would cover all Americans. He introduced every term until he died. John Jr. has introduced in each of his 27 terms, including the current one.