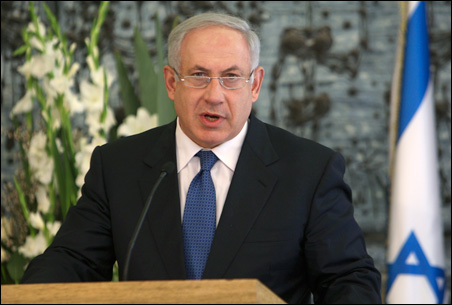 Israeli president Shimon Peres has asked Benjamin Netanyahu, the leader of the hard-line Likud Party, to form a new government, presumably with Netanyahu himself as prime minister. The NYTimes coverage sums up the situation very well. Netanyahu has six weeks to assemble a majority coalition and made a clear statement that he would prefer a broad national unity government to a bare majority that he could form entirely with right-wing and religious parties. Netanyahu will meet with Kadima leader Tzipi Livni on Sunday to see if they can work together.

The Jerusalem Post’s latest makes it sound like the idea of Livni agreeing to to join a Netanyahu-led government is not dead but very unlikely.

Livni told Haaretz, Israel’s paper of the left, that she would consider the coalition depending what right-wing parties are included. Netanyahu has also said he would welcome Labor, Israel’s traditional left-leaning party, in the coalition. But all the coverage repeats that Labor, which finished a disastrous fourth in the election, is determined to try to rebuild its standing from the opposition.

Peres, a long-time Labor man, would surely have preferred to see someone other than Netanyahu as P.M., but under Israel’s system, he had little choice.The Obama Admionistration will also not welcome this development, but I don’t know how open they will be about it.

It’s hard to believe that anything in this picture creates much optimism for progress toward Arab-Israeli peace. Livni notes that while Netanyahu talks about wanting peace with Israel’s neighbors, he does not speak of a two-state solution to the Israeli-Palestinian conflict.

In such circumstances, optimists usually point out that it took Nixon to go to China and that Likudnik Menachem Begin signed the Camp David accords.