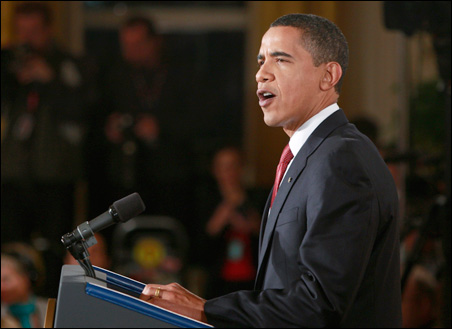 My wretched overall: On a substance basis, there were few new facts or arguments. President Obama made the case he has been making for a while: We need a substantial stimulus package; the precise details and mix of tax cuts/spending aren’t as important as doing something on the $800 billion scale and doing it quickly. It’s silly to criticize the program as a spending bill instead of a stimulus bill, since spending is what provides the stimulus.

Although I’m quite nervous about the borrowing this all entails, most economists, including many conservatives, agree that this is necessary. I didn’t hear any noteworthy new points. I suppose expecting new information from a presidential press conference may be too high a standard. Mr. Obama is in campaign mode, and we don’t expect a new line in every stop on the campaign trail.

On a performance basis: It was somewhere between OK and pretty good. Obama is incalculably more articulate than Bush was. His sentences generally scan. He seemed strong, confident, on top of his material. But he showed little humor, wit or memorable phrases, let alone poetry.

The symbolism: I got tired of the use of Elkhart, Ind., as a prop. (Obama went there earlier in the day because Elkhart’s unemployment rate shot from 4.7 to 15.3 percent over the past 12 months.) I’m not really sure these kinds of field trips are a great use of the president’s time or the taxpayers’ money. When presidents have come to the Twin Cities, I’ve generally been more struck by the disruption they cause with closed highways and airports than with the value of hinterlander-president interaction (to either party).

A Lincolnian comparison (I’m obsessing on Lincoln during this, the bicentennial year of his birth): Other than a quick train trip to Gettysburg, Pa., to give a little speech, Lincoln seldom traveled outside the D.C. environs during his presidency.

The Dodgeball report: I always try to notice whether the questions are directly answered. Obama did pretty well at not playing dodgeball. At least he touched upon each major aspect of each question (in a couple of instances, only to say that he couldn’t/wouldn’t say much about it, but that’s better than pretending the question didn’t exist).

Fun with numbers: Obama said several times (this is not a new theme either) that the stimulus bill would save or create 4 million jobs (sometimes he merely said that 4 million jobs was its goal). He also said that the economy will continue bleeding jobs, at least for the remainder of this year. (Analysis point: The days of Bushy rosy scenario-ism are over.)

So this implies that somehow, at some future point, we will theoretically be able to look back and identify jobs that exist because of the stimulus, and not only jobs that were created because of stimulus spending (I can sort of picture how some of those might be identified and counted) but also jobs that existed before the stimulus and still existed afterward, but would have disappeared without the stimulus (I don’t doubt that the stimulus will have that effect on some jobs, but am very skeptical that this effect can be measured).

More fun with numbers: Jake Tapper of ABC News asked Obama how the public should measure whether his program is working. On the CNN post-conference coverage, Gloria Borger said that the president had specified how this could be done. But Mr. Obama did no such thing.  He said in the most general ways that progress could be measured in jobs (created or saved), in the flow of credit and in some combination of fewer home foreclosures and a stabilization of home prices. It looks to me like there were no concrete measures in any of these areas to which Mr. Obama could be held. Here’s the full quote (transcript supplied by the White House):

THE PRESIDENT:  “I think my initial measure of success is creating or saving 4 million jobs. That’s bottom line number one, because if people are working, then they’ve got enough confidence to make purchases, to make investments.  Businesses start seeing that consumers are out there with a little more confidence, and they start making investments, which means they start hiring workers.  So step number one, job creation.

Step number two:  Are we seeing the credit markets operate effectively?  I can’t tell you how many businesses that I talk to that are successful businesses, but just can’t get credit.  Part of the problem in Elkhart, that I heard about today, was the fact that — this is the RV capital of America.  You’ve got a bunch of RV companies that have customers who want to purchase RVs, but even though their credit is good, they can’t get the loan.  Now, the businesses also can’t get loans to make payments to their suppliers.  But when they have consumers, consumers can’t get the loans that they need.  So normalizing the credit markets is I think step number two.

Step number three is going to be housing:  Have we stabilized the housing market?  Now, the federal government doesn’t have complete control over that, but if our plan is effective, working with the Federal Reserve Bank, working with the FDIC, I think what we can do is stem the rate of foreclosure and we can start stabilizing housing values over time.  And the most — the biggest measure of success is whether we stop contracting and shedding jobs, and we start growing again.  Now, I don’t have a crystal ball, and as I’ve said, this is an unprecedented crisis.  But my hope is that after a difficult year — and this year is going to be a difficult year — that businesses start investing again, they start making decisions that, you know, in fact there’s money to be made out there, customers or consumers start feeling that their jobs are stable and safe, and they start making purchases again.  And if we get things right, then starting next year we can start seeing some significant improvement.”

The bipartisanship thing: This is a minor media obsession. Obama was ballyhooed as the agent of post-partisanship, but exactly zero House Republicans and three (maybe, we’ll soon see) Senate Republicans have agreed to his stimulus plan. Two of the 13 questions were, basically: Why have you failed to get more Republican votes? Obama handled these questions with grace and steely resolve. He has reached out to Republicans. He hopes to gradually change the tone. But if bipartisanship means letting the other party, the party that lost the election, write the bill, it isn’t gonna happen.

According to some analyses portrayed the main point of the press conference was to portray Republicans who oppose the bill as flat-earthers who want the government to do nothing and risk an economic catastrophe. I don’t know if that’s fair, but I would have more respect for those opponents who make clear what the alternative plan is.

Bush-bash of the night: Mr. Obama made no personal remarks about his predecessor by name, although there were several references to things like “the failed theories of the last eight years that got us into this fix in the first place.”

Democratic strategist Paul Begala showed no such restraint. On the CNN post-game show, he reacted thusly to carping he had heard from others about Obama’s lengthy answers:

“Yeah, he talked a little long, but y’know, what a relief after George W. Bush. Watching Bush try to complete a sentence was like watching a fat drunk guy cross an icy road. Y’know, you just knew he wasn’t gonna make it. This guy at least has some command of the issues.”

For all my carping, I hope Mr. Obama does this often. What think?