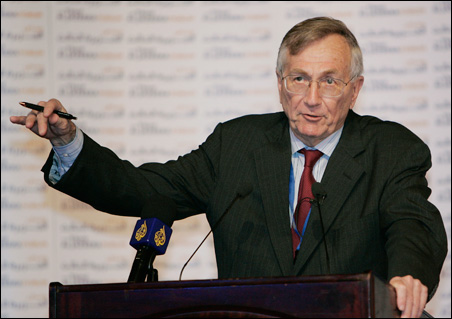 REUTERS/Fadi Al-Assaad
Journalist Seymour Hersh speaking in Doha at an Al Jazeera forum on the media in 2007.

At a “Great Conversations” event (MP3) at the University of Minnesota last night, legendary investigative reporter Seymour Hersh may have made a little more news than he intended by talking about new alleged instances of domestic spying by the CIA, and about an ongoing covert military operation that he called an “executive assassination ring.”

Hersh spoke with great confidence about these findings from his current reporting, which he hasn’t written about yet.

In an email exchange afterward, Hersh said that his statements were “an honest response to a question” from the event’s moderator, U of M Political Scientist Larry Jacobs and “not something I wanted to dwell about in public.”

Hersh didn’t take back the statements, which he said arise from reporting he is doing for a book, but that it might be a year or two before he has what he needs on the topic to be “effective…that is, empirical, for even the most skeptical.”

The evening of great conversation, featuring Walter Mondale and Hersh, moderated by Jacobs and titled “America’s Constitutional Crisis,” looked to be a mostly historical review of events that have tested our Constitution, by a journalist and a high government official who had experience with many of the crises.

And it was mostly historical, and a great conversation, in which Hersh and Mondale talked about the patterns by which presidents seem to get intoxicated by executive power, frustrated by the limitations on that power from Congress and the public, drawn into improper covert actions that exceed their constitutional powers, in the belief that they can get results and will never be found out. Despite a few references to the Founding Fathers, the history was mostly recent, starting with the Vietnam War with much of it arising from the George W. Bush administration, which both men roundly denounced.

At the end of one answer by Hersh about how these things tend to happen, Jacobs asked: “And do they continue to happen to this day?”

“Yuh. After 9/11, I haven’t written about this yet, but the Central Intelligence Agency was very deeply involved in domestic activities against people they thought to be enemies of the state. Without any legal authority for it. They haven’t been called on it yet. That does happen.

“Right now, today, there was a story in the New York Times that if you read it carefully mentioned something known as the Joint Special Operations Command — JSOC it’s called. It is a special wing of our special operations community that is set up independently. They do not report to anybody, except in the Bush-Cheney days, they reported directly to the Cheney office. They did not report to the chairman of the joint chiefs of staff or to Mr. [Robert] Gates, the secretary of defense. They reported directly to him. …

“Congress has no oversight of it. It’s an executive assassination ring essentially, and it’s been going on and on and on. Just today in the Times there was a story that its leaders, a three star admiral named [William H.] McRaven, ordered a stop to it because there were so many collateral deaths.

“Under President Bush’s authority, they’ve been going into countries, not talking to the ambassador or the CIA station chief, and finding people on a list and executing them and leaving. That’s been going on, in the name of all of us.

“It’s complicated because the guys doing it are not murderers, and yet they are committing what we would normally call murder. It’s a very complicated issue. Because they are young men that went into the Special Forces. The Delta Forces you’ve heard about. Navy Seal teams. Highly specialized.

“In many cases, they were the best and the brightest. Really, no exaggerations. Really fine guys that went in to do the kind of necessary jobs that they think you need to do to protect America. And then they find themselves torturing people.

“I’ve had people say to me — five years ago, I had one say: ‘What do you call it when you interrogate somebody and you leave them bleeding and they don’t get any medical committee and two days later he dies. Is that murder? What happens if I get before a committee?’

“But they’re not gonna get before a committee.”

Hersh, the best-known investigative reporter of his generation, writes about these kinds of issues for The New Yorker. He has written often about JSOC, including, last July that:

“Under the Bush Administration’s interpretation of the law, clandestine military activities, unlike covert C.I.A. operations, do not need to be depicted in a Finding, because the President has a constitutional right to command combat forces in the field without congressional interference.”

(“Finding” refers to a special document that a president must issue, although not make public, to authorize covert CIA actions.)

Here is a tape of the full Mondale-Hersh-Jacobs colloquy, a little over an hour, without the audience Q and A. If you want to look for the Hersh statement quoted above, it’s about at the 7:30 mark.

The rest of the evening was, as expected, full of worry and wisdom and quite a bit of Bush-bashing.

Jacobs walked the two elder statesmen through their experiences of:

Mondale stuck with the happy answer. “The system has come through again and again,” he said. Presidents always think they will get away with it, but eventually reporters like Hersh bring things to light, the public “starts smelling this stuff,” the courts and the Congress get involved. Presidents “always, in the long run, find out that the system is stronger than they are.”

Hersh seemed more troubled by the repetitions of the pattern. The “beautiful thing about our system” is that eventually we get new leaders, he said. “The evil twosome, Cheney and Bush, left,” Hersh said. But he also said “it’s really amazing to me that we manage to get such bad leadership, so consistently.”

And he added that both the press and the public let down their guard in the aftermath of 9/11.

“The major newspapers joined the [Bush] team,” Hersh said. Top editors passed the message to investigative reporters not to “pick holes” in what Bush was doing. Violations of the Bill of Rights happened in the plain sight of the public. It was not only tolerated, but Bush was re-elected.

And even Mondale admitted that one of his greatest successes, laws reforming the FBI and CIA in the aftermath of the Church Committee, were supposed to fix the problem so that “we would never have these problems again in the lifetime of anyone alive at the time, but of course we did.”

UPDATE: The CIA responds to Seymour Hersh (via MinnPost)