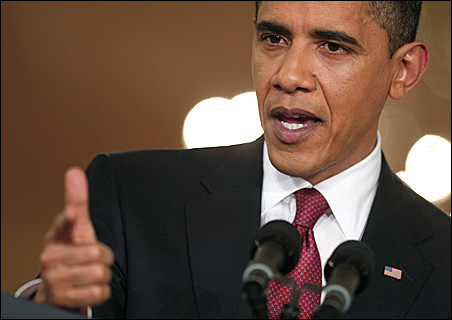 REUTERS/Jason Reed
President Obama speaking during a prime-time news conference in the East Room of the White House last night.

President Obama met the press for an hour last night and committed scant news. Transcript and full video available here via WashPost. The reporters, who according to some theories are his love slaves, aggressively put him on the defensive. The economy and the budget dominated. No one asked about Iraq or Afghanistan.

There were no flashes of humor or poetry and not much of the common touch. (One of his only short answers of the night, about why his historic, first black presidentness is irrelevant if he fails to revive the economy, was his best.) Some instant analysts thought the prez was tired or cranky.

Obama basically stood his ground. He re-endorsed, so to speak, his own priorities and proposals as reflected in his budget. The key issue, I suppose, is whether it is really a good idea to take on health care and education reform plus green energy while the economy clings to a vine. It’s a good, tough, question, but not a new one. Obama said yes before and, a few weeks later, still says yes. We have to lay the groundwork for the long-term while doing everything possible to decrapify the crappy economy, he said and says. He actually said it during the campaign, too, but that was before the economy was topic one, two, three and four.

I don’t know if he’s right. The scale of Obama’s ambitions is daunting. But it would be more worrisome if his answer was different every two weeks depending on the latest poll, the latest shift in the Dow, the outrage du jour (which, I gather, remains the AIG bonuses).

I give Obama major credit for his fluency, both the grammar and the substance — especially compared to his predecessor, although eventually we have to stop grading him on that easy curve. This guy knows why he’s doing what he’s doing, and he can explain it. Evidence of a logical mind at work.

The press conference is being rated a snorefest in some quarters, but that mostly reflects his consistency. Also his tendency to three-to-five-minute answers. Bill O’Reilly, who may have special expertise on the topic, called it “bloviation.” Looking at his answers this morning in the transcript, they don’t really seem that long. I fear our attention spans are really just that short.

I give Obama generally high marks for actually responding to what he’s asked rather than tacking to a rehearsed answer, although there was some of that. Jake Tapper of ABC asked him whether he would sign or veto the congressional budget if it doesn’t reflect two of his priorities — a cap-and-trade program on carbon emissions and a middle-class tax cut. Although there’s a technical problem with the question (the president doesn’t sign or veto the budget resolution, which is what Congress is working on at present), it’s really an invitation to Obama to draw some lines in the sand. Obama’s answer was reasonable, but captured why the press conference didn’t register much on the newsworthiness Richter scale.  Obama restated his priorities, defended his proposals, acknowledged that Congress has something to say about the best way to accomplish long-term goals and that the process will include a lot of give and take:

“We never expected, when we printed out our budget, that they would simply Xerox it and vote on it. We assume that it has to go through the legislative process. I have not yet seen the final product coming out of the Senate or the House, and we’re in constant conversations with them.”

If we think about it like grown-ups, this is a reasonable answer, grounded in reality. But he didn’t say yes or no. That would’ve made news.

Obama’s weakest stuff, at least to a devoted debt hawk like me, was the deficit talk. Obama continues gloss an enormous increase in public debt with the claim that his plan to cut the deficit by half at the end of his current term proves he has long-term fiscal stuff on his mind. I’d rather have him say that than say it doesn’t matter. But he’s brought it up too many times and it seems to be a statistical trick. As the evening wore on, he seemed to admit that even if he can hit that cut-the-deficit-in-half target, it will probably start going up again immediately. This troubles me and he’s convinced me that troubles him.