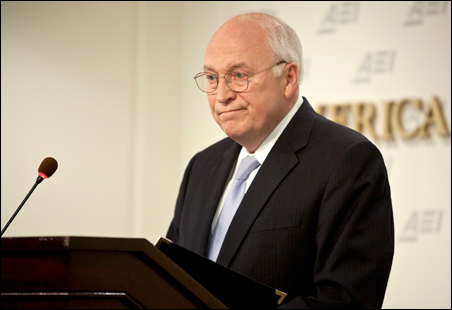 In his big AEI speech on national security yesterday (transcript here), former Veep Dick Cheney slammed the Obama administration for, among other things, using “euphemisms” to talk about what his administration called “the global war on terror.” The Obamian doublespeakers, Cheney complained, prefer to call it “overseas contingency operations.”

I gather there may be a modicum of truth here. Some administration spokesters have indeed uttered the phrase in describing the U.S. forces in Iraq and Afghanistan, and the term does the have the air of pettifoggery about it.

I agree with Dick Cheney. Plain-speaking is a good thing. But for the former vice president to deliver a rebuke on the topic is a fairly stunning display of chutzpah.

His was an administration that pushed through a law making it easier to wiretap phones, monitor email, access medical and financial records and deport immigrants, and decided, because of their commitment to candor, to name it “the USA Patriot Act.” It’s education policy was “no child left behind.” The transfer of prisoners to countries that employ torture was “extraordinary rendition.” The Bush policy allowing more “harvesting” of trees was dubbed the “health forest initiative.”

If you have other favorite euphemisms of the Bush years, feel free to reminisce in the comment thread.

But what the heck. Cheney is out of office now and free to return to his natural penchant for plain-speaking. And, as he said Thursday:

“It’s one thing to adopt the euphemisms that suggest we’re no longer engaged in a war. These are just words, and in the end it’s the policies that matter most.”

And most of his talk was a robust defense of a policy that he advocated and still defends, a policy that authorized the use of interrogation tactics that crossed boundaries into what previous administrations, and the current administration, have considered “torture.” A blunt word, that, and still being disputed by Cheney and others, but certainly no euphemism.

No, but there is a euphemism for those tactics, coined and relentlessly repeated by the Bush-Cheney administration. The euphemism, which is really a classic of the genre, is “enhanced interrogation of high-value detainees.” How’s that for calling a spade a spade?

The plain-speaking former veep, who is offended by euphemizing, used the term “enhanced interrogation” 12 times in his fairly short speech.