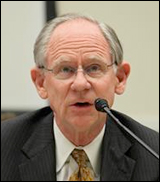 Any minute now, the most popular Republican in Delaware will announce as a candidate for the open U.S. Senate seat in 2010.

He’s Mike Castle, currently a congressman, formerly a governor and a politician who has never lost a race in this otherwise Dem-leaning state.

The seat is the one vacated by Joe Biden when he became veep. Long-time Biden aide Ted Kaufman now holds the seat by appointment with no plans to run for a full term. Biden’s son Beau, the current Delaware attorney general, is the likely Dem nominee. Beau Biden recently returned from a year’s deployment to Iraq (and somehow managed to function as the state’s AG while he was overseas).

Castle’s current House seat is a statewide office, since Delaware has only one House seat. He has held statewide office continuously since he was elected Lt. Gov in 1980. He was governor from 1984 to 1992. Castle is now 70. Beau Biden is 40. I suppose Castle’s age will be an issue, but those who know Delaware politics believe he is a major contender and probably the only Repub who could give Biden much of a contest. Upon learning that Castle, who had been publicly mulling whether to retire or run for the Senate, would choose the latter option, the Rothenberg Political Report rated the race as “leans Republican.” 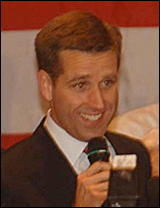 A lot of the info above is cribbed from Chris Cillizza’s excellent Wash Post blog, The Fix. I have also relied on The Fix for Cillizza’s rankings of Senate seats most likely to change parties, but it’s months since I published it and Cillizza hasn’t done a complete update since late July.

It is normal for the president’s party to lose seats, sometimes many seats, in mid-term congressional elections. There is a growing concensus among those who constantly calculate such things that the Repubs make a major gain in the 2010 House elections. Less so in the Senate, where individual candidacies can more easily overcome national trends. In early and mid-2009 the mid-term Senate races looked very promising for Dems to actually add to their 60-seat majority.

Another 2010 Senate seat now toss-up or better for Repubs